So You've Graduated From The University Of Illinois

Congratulations on achieving one of the more remarkable accomplishments on your long, slow march toward death.

Share All sharing options for: So You've Graduated From The University Of Illinois

Congratulations, you have graduated from the University of Illinois. You should be proud of yourself, as it's an accomplishment worth being proud of. Despite everything 12-year old you told yourself growing up, you managed to keep waking up in the morning and going to school even without your mom waking you up and forcing you to go. You're a god damn adult now.

Look at you, College Graduate.

All those nights of drinking heavily followed by mornings of hungover cramming before tests, "borrowing" your friend's notes, Googling like you've never fucking Googled before have finally been paid back with a piece of paper that shows the world you have the ability to show up in a certain room at a scheduled time repeatedly for years on end.

We're so proud of you, College Graduate.

And we're sure you're proud of yourself, College Graduate, but we'd be doing you a disservice if we did not prepare you for your future. You see, College Graduate, while this college degree may be the end of your life as a student -- unless you're going on to grad school, which, if that's the case, enjoy having to do more work while living on Ramen noodles and whatever scraps of food you find laying about in the streets -- it's merely the beginning of the next step in the long, slow march toward your death.

What does real life consist of? Do you really want to know?

Let's just say that degree may not be worth nearly as much as you think it is. A friend of mine graduated from the University of Illinois ten years ago with not one but two degrees. You know what that got him? A job managing a Sports Authority for a few years before finally going back to get a Master's and becoming a teacher. He's now a teacher who makes less money than I do annually and I'm a professional writer.

Of course, before he went on to become a teacher, graduating meant something else as well. It's hard to live on your own as a manager at Sports Authority. So my friend had to move back in with his parents.

Just when you've spent the last few years thinking you're an adult and that you're independent now you move right back in with your parents. And if you thought living with your parents sucked while you were in high school, now they're just as pissed off to have you there are you are to be there.

Oh, they won't say it to your face. After all, you just finished doing the one thing they spent your whole childhood telling you that you had to do, College Graduate, so you have some leverage. That's the only reason you're there. But that doesn't mean they like it.

The only way you can escape moving back home is to have a job and HAHAHAHAHAHAHAHAHAHAHAH, you don't have a job! Are you kidding? Look at the trouble my friend went through with two degrees and he graduated ten years ago before the economy went to shit.

Now the only shot you have at making enough money to pay rent is prostitution/stripping -- while you're still young and attractive! -- or selling organs on the black market.

Unless of course you're getting married, and if you are, well, good luck with that. I mean, being alone is hard enough, but having to pay for two unemployed college graduates is damn near impossible.

So congratulations again, College Graduate. You just made the worst mistake of your life.

Seriously, College Graduate, congratulations. The real world is not an easy place to dwell, but if you were able to get this far you'll figure it out. I believe in you, and so does your football coach. 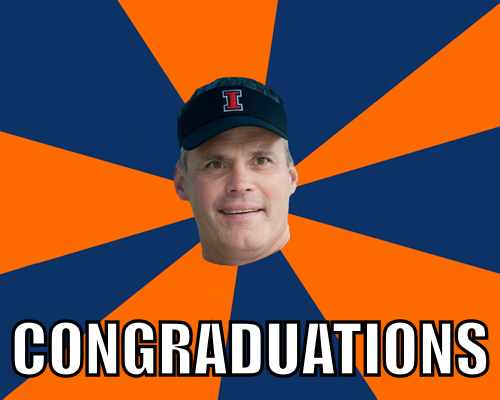