The West Side Is The Best Side For Illinois

Share All sharing options for: The West Side Is The Best Side For Illinois

It isn't official yet, but it seems it's about as official as official can be without being official. The Legends and Leaders Divisions will soon be thrown into a trash can, set on fire and then never spoken of again. When Rutgers and Maryland join the Big Ten in 2014 the conference will finally display some common sense.

And we'll be in the West alongside schools like Iowa, Minnesota, Nebraska, Northwestern, Purdue and Wisconsin. The East will consist of Indiana, Maryland, Michigan, Michigan State, Ohio State, Penn State and Rutgers. And this is a fantastic development, seriously.

While Nebraska is certainly the biggest dog on our new block, our area of the Big Ten neighborhood is a hell of a lot more friendly than across the tracks over on the east side. You don't even have to do any real research to know that it's better to be in the division that does not include Ohio State, Penn State and Michigan, but when you do the research, it becomes even clearer.

Here is how the Illini have fared against the schools from each division, starting with the East and then the West. 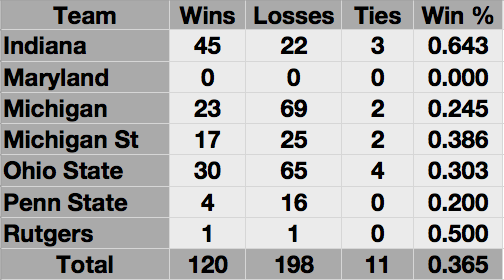 Yes, there have been a lot more wins against the teams in the West than the East. Not including Rutgers or Maryland, the East Division has only one team the Illini have even managed to win more than 40 percent of the time against: Indiana. Take away the Hoosiers, Rutgers and Maryland and the Illini are 74-175-8 against the Big Four of the East Division. That's a win percentage of .288.

Meanwhile, when looking at West opponents, Nebraska is the only team the Illini have won less than 40 percent of their games against, and they've more wins than losses. If you remove ties from the equation Illinois' win percentage is actually .508 in games that actually had outcomes.

Now, don't get me wrong, I'm not sitting here trying to tell you that once the Illini find themselves in the West wins are going to start coming along with postseason glory. I'm not delusional, all I'm saying is that the Illini will have more opportunities to succeed in the West than they will in the east.

And while I'm a bit disappointed that we won't see schools like Michigan and Ohio State in Champaign nearly as often -- even with the nine-game conference schedule Illibuck will make far few appearances, but he's survived much worse -- the truth his we don't lose any real rivals in this setup either. Both Purdue and Northwestern, the two schools closest to Champaign, are in the division, and Iowa seems like a natural rivalry that will develop with regular meetings.

So this could all turn out well for the Illini in the future. Well, until the conference expands to 16 and fucks everything up again.