The Weekly Stalker: Where The Loss Of Jim Bridge Could Really Hurt

The Weekly Stalker is The Champaign Room's weekly update on all that's happening in Illini recruiting, both football and basketball. Because there's nothing creepy at all about grown men hanging around high schools offering teenagers free rides.

Share All sharing options for: The Weekly Stalker: Where The Loss Of Jim Bridge Could Really Hurt

The departure of Jim Bridge came as a shock on Tuesday and the initial reaction most had to the news was "here we go again." After all, it's been an offseason filled with coaches leaving Illinois, as the coaching staff is going to look a lot different in 2013 than it did in 2012.

Well, look for yourself. 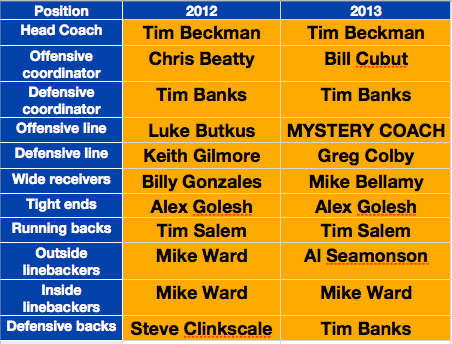 That's a lot of change, and that's not always necessarily a bad thing, but what's worrying about our situation is how often it's happening, and how in many of the cases, it's the coach's decision to leave. Firing guys is one thing, having them walk out on you is another.

And while the Bridge news yesterday bothered me for the obvious reasons, after letting it sit awhile, it's not his coaching ability that I'm worried about. No, even though it won't be an ideal candidate at this point, whoever replaced Bridge will be able to coach an offensive line.

What truly bothers me is the impact it could have on recruiting.

Bridge wasn't here long enough to have any impact on our 2014 class, and that's a shame because, by and large, Bridge has a reputation as being a strong recruiter. And in an area of the country -- the mid-Atlantic through the southeast -- that's becoming more and more important in recruiting every year.

ESPN.com's Midwest Regional Recruiting Coordinator, Jared Shanker, talked to IlliniHQ.com about the impact Bridge's departure, and the mass exodus of coaches overall, can have on Illinois' recruiting.

"It will make you wonder why," Shanker told IlliniHQ. "It seems like guys are jumping ship. You don't definitively look at Purdue as a significantly better job (than Illinois). That's not a knock on either program. You have to look and wonder if you're a parent, why all the coaches are leaving.

"They have had a lot of staff turnover. It definitely would raise red flags with recruits and their parents. That can be smoothed over with the new person recruiting them, though. In a sense, there is ground that can be made up with so much time until signing day, but there is still a tighther window for a relationship to be built."

Essentially, recruits and their families ask themselves the same questions we do about what the hell is going on inside this football program, and for parents concerned about where they're sending their children for the next four years, that kind of instability would definitely be a red flag.

For all their faults in 2012, Tim Beckman's first staff was still able to put together a pretty good recruiting class -- as far as we can reasonably tell at this point -- even in the midst of a 2-10 season. There's also been a pretty good buzz about Illinois from local recruits about Illinois in spite of the struggles.

It's going to be interesting to keep an eye on how all of these coaching changes could impact the feeling about Illinois.

If I can't help but feel like Tim Beckman is a lame duck at this point, how can a recruit feel any different?

-- Now that we got that depressing shit out of the way, let's get to the part where we can start feeling good about things again. Dorian Hendrix is a linebacker out of Ohio that I'm pretty high on, and while he has plenty of offers and some interest from Ohio State and Notre Dame, he recently listed Illinois as one of the three schools he's feeling the best about right now. The other two are Indiana and Kentucky.

-- A couple of Ohio defenders got offers from Illinois this week. They are defensive end Tito Odenigbo and outside linebacker Sam Hubbard. Hubbard's an interesting case because he originally committed to Notre Dame to play lacrosse, but after a big junior season on the football field he's starting to garner a lot of interest there as well.

-- Mike Dudek, a wide receiver from Naperville's Neuqua Valley, picked up an offer from the Illini this week. He was in town for that junior day last week and the coaches were really impressed with him and then made the offer on Monday. It's his first FBS offer, though teams like Michigan State, Wisconsin, Indiana and Iowa State are sniffing around.

-- Outside linebacker Vontae Diggs made an unofficial visit to Champaign over the weekend, his second trip to the school after attending Junior Day in January. He's yet to get an offer, but it's obvious he's interested in the Illini.

-- Not a whole lot of basketball recruiting updates to note this week, though 2015 guard Joseph Toye from Whitney Young recently talked to John Groce and says he's getting some interest, if not an offer, from Illinois. Gee, why in the world would John Groce be checking out Whitney Young games?

-- Speaking of basketball, if you missed it earlier this week, Cliff Alexander gave an update on his recruitment while checking out the Illini against Nebraska this weekend.

-- Four-star athlete Dareian Watkins plans on visiting Illinois and plans to make a decision as soon as May. I hope that decision is Illinois.

-- Illini target Mikale Wilbon picked up yet another offer this week, this time from Georgia Tech.