The Illini are pretty much sure things to get to the dance this year while Iowa is fighting for its life. All of which means the Illini can't relax tonight if they want to leave Iowa City with a win.

If you're like me after the Illini held off Nebraska over the weekend you couldn't help but relax a little bit. The game was tense in itself, but instead of the relief of escaping what would have been a terrible loss, the comfort came from knowing that no matter what happens from here on out, the Illini are going to be in the NCAA tournament.

Unfortunately letting your guard down isn't a phenomenon exclusive to fans.

These are college kids we're talking about, so there is a chance that, knowing they're safe, the Illini could get a bit complacent tonight. That's not to say they're walking onto the floor not caring if they win, but the fact that it's not a must-win could play a role. Especially when you consider how important this game is for the Hawkeyes.

It's not easy to go into Carver-Hawkeye Arena and win this year, as the Hawkeyes are currently 14-2 at home with their only losses coming to Indiana and Michigan State by a grand total of seven points combined. So considering the environment and how important this game is to Iowa, I wouldn't be shocked if the Hawkeyes jump out to a big lead.

Which is where Illinois' attitude will come into play.

Should Iowa jump out to the early lead and the Illini aren't fully committed to winning this game, it could get ugly and it could affect where we're seeded in the tournament. Which is why, even though this game doesn't have an impact on our postseason bonafides, it's still an important game for the Illini, and I'm sure that's what John Groce is driving home to his team.

Not just for seeding in the Big Ten Tournament, where a higher seed means an easier opponent, but in the NCAA tournament as well. Another win would only improve our chances of climbing up in the brackets and that win could be the difference between a possible date with a team like Kansas in the second round or a team like Oklahoma State.

As for the Hawkeyes themselves, they're an up-tempo team and one that's going to look to get out and run more often rather than run a half-court offense. There's a reason they're averaging nearly 71 points per game while shooting only 42% from the floor and 30% from three.

And as those numbers would suggest, there are no great shooters on this Iowa team, so if the Illini defend like they're capable of for a full 40 minutes, this is a game they can win.

Iowa is not a great rebounding team, even if it averages more rebounds per game than any other Big Ten team. The number of rebounds is a bit misleading, as there tend to be more rebounds available in Iowa games. Iowa is much better on the offensive glass than it is the defensive glass, and they don't force a lot of turnovers. However, what Iowa does well is limit their opponent's shooting.

Opponents have an eFG% of only 43.7% on the season. The only other defenses in the Big Ten to hold opponents to a lower number than that this season are Wisconsin and Indiana. Illinois, meanwhile, allows opponents to shoot an eFG% of 48.7%.

Which may not bode well for tonight, as the Illini will have to shoot well to win a tough road game and most teams don't shoot well against Iowa. The Hawkeyes are also pretty good at keeping opponents off the free throw line as their defensive free throw rate is a very respectable 30.9%. Something else that does not bode well for a guy like Brandon Paul who has been trying a bit too hard lately to get to the free throw line since his jumper isn't falling.

In other words, Iowa is a solid team, and it's better than its record indicates. However, it's also a team that the Illini can beat if they defend, and since defense is all about effort, it's probably going to come down to how important the Illini think this game is. 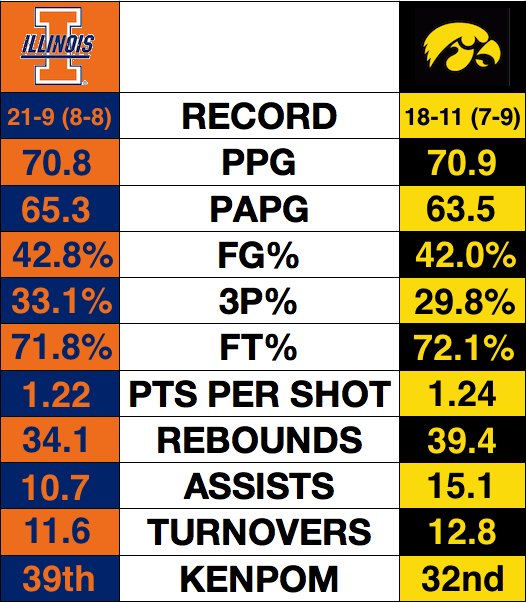 If Roy Devyn Marble has a good shooting game, it's going to be really hard to beat Iowa. Consider him the Hawkeyes Brandon Paul, as it's no coincidence that over a five-game stretch when Marble was averaging 6.0 points per game Iowa went 1-4. In the six games since, with Marble averaging 19.0 points per game, Iowa is 4-2. See how that works?

Of course, considering I just spent a paragraph talking about Marble, it only makes sense that I'd say the guy we really need to worry about is Aaron White. White isn't a great shooter from three, though he'll take them if they're available. It's when he's inside the arc that he becomes a real problem, as he's shooting 55.6% from the land of two points, and he gets to the free throw line often enough. His free throw rate is 91.8%, which is the highest rate in the Big Ten. The next highest number is Trevor Mbakwe at 77.5%. Making matters worse, White hits 73% of his free throws.

So when you combine the fact that the 6'8 white gets to the free throw line and the fact Nnanna Egwu will be guarding him a lot, and you can see why White may be a giant pain in the ass. Especially if Sam McLaurin's ankle is still a problem.

Where you at, Joseph Bertrand? While I'd love to see Brandon Paul get it going tonight, I'd also like to see you make an appearance. You've disappeared a bit lately. It used to be that even if you weren't scoring you'd rebound, but even that's slipped a bit as you're averaging only 4.9 points and 3.6 rebounds in the last seven games. And if you take out the 12 rebounds you had against Purdue your average goes down to 2.5.

In a game like this where a win isn't going to be easy, the Illini could really use a strong effort from Bertrand, whether he's in the starting lineup again or coming off the bench. The more weapons we have in the arsenal, the better we are.

Fornelli: I really don't think John Groce is going to let this team relax tonight, but with how tough Iowa has been at home and how important this game is for the Hawkeyes, I just don't see a win for the Illini in the cards. I think it's going to be a fun, close and probably up-and-down game, but I see the Hawkeyes holding on. Iowa 75 Illinois 70 (10-6 on the season).

Primiano: Looking at the Hawkeyes using KenPom numbers, they're our weird inverse. We're 27th in adjusted offense and 72nd in adjusted defense. They're 71st and 23rd respectively. And if you look at their schedule, they're pretty much just us but without the benefit of a tough non-conference lineup. I don't feel particularly great about this game, but I like what we've been doing as of late. Illinois 68 Iowa 65 (9-7 on the season).