I wouldn't mind another Illini game or two this season, would you?

Share All sharing options for: We Weren't Expected To Get This Far So No Point In Stopping Now

The thing about the NCAA Tournament is that it doesn't get any easier. Which could be a problem for the Illini considering the struggles they endured in getting past Colorado on Friday afternoon. Suffice to say that if the Illini go through another Great Offense Famine against the Hurricanes, they're not going to shock the world and move on to the Sweet 16.

But I'm not going to write another 700 words on how the Illini need to make shots to win. We all know that. What I am here to tell you is that, as tough as this Miami team is, it's not perfect. It can be beaten, and has been beaten by some questionable teams.

While it's certainly more understandable after seeing what it did against Georgetown last night, Florida Gulf Coast University's first upset of this season was of Miami in November. And that wasn't some fluke either, as FGCU won by 12 points.

Miami has also lost to teams like Indiana State, Wake Forest and Georgia Tech. The Canes finished the regular season losing three of their last five games before getting their shit together in the ACC Tournament.

So just like the Illini, this Miami squad is more than capable of laying an egg from time to time.

Now, believe me, there are plenty of things about this Miami squad that the Illini should worry about. First of all, they're one of the biggest teams in the country, though that's a bit misleading since some of that size rarely sees the court. Still, of the seven players that get regular minutes in Miami's rotation, three are 6'10 or taller. And it's none of that skinny, tall guy shit.

Kenny Kadji is the lightest of the bunch, and he's 242 pounds. Julian Gamble is 250 pounds and Reggie Johnson is bad news for your bathroom scale at 290 pounds.

As you'd expect, Miami is a good rebounding team, but it's not all bad news for the Illini. The truth is that Miami's rebounding strength is on the defensive end, where it grabs 82.2% of the available rebounds. Which is problematic for the Illini, obviously, but we only grab a third of the available offensive boards anyway, so it's not like this is a new situation for us.

The good news is Miami is not a great offensive rebounding team either, as its rate is 30.9%, which is actually worse than ours.

More good news for the Illini? Well, Miami's three-point defense is a lot like Colorado's was. Teams are only shooting 32.7% against Miami from three but 35.2% of the shots Miami gives up are from three. Which tells me that Miami's guards -- Shane Larkin, Durand Scott and Rion Brown -- don't really do a great job of guarding the perimeter. There's obviously a lot of open space.

So the Illini are going to get open looks from three just like they did against Colorado, they just have to hit them.

As for defense, Miami poses a set of problems. Kenny Kadji is not only big, but he doesn't mind getting up and down the court or playing with his back to the basket in the half-court. I suspect that we're going to see the Illini double Kadji much they same way they've done with guys like Trevor Mbakwe in the past.

Which could be terrible news if those doubles leave guys like Shane Larkin, Durand Scott or Trey McKinney Jones open. These are not good guys to leave open, as Scott is the "worst" three-point shooter of the bunch and he's hitting 36% of his. Larkin checks in at over 40%.

Which is a matchup problem, and means that if the Illini are going to double Kadji it'll likely have to come from either Griffey or McLaurin.

Overall Miami is a team that can get out in the open court when the opportunity arises, but prefers the half-court and is a very good shooting team. That's the biggest difference between this squad and Colorado. Similar tempos, but Miami doesn't need to rely on a guy like Colorado's Dinwiddie to get to the free throw line. They just find the open shot and hit it more often than not.

So, what I'm saying is, this game is not going to be easy. 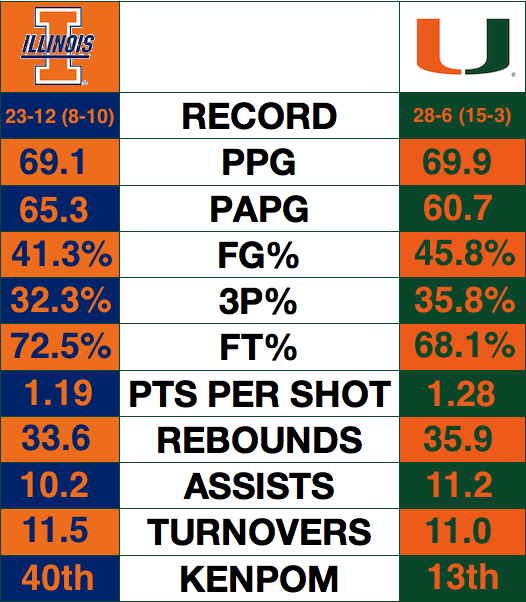 Guy That Will Be A Pain In The Ass

I've spent a good amount of time talking about him already, and it's Kenny Kadji. He's 6'11, averaged 13 points and 7 rebounds a game, and he's also a 36% shooter from three while taking nearly four a game.

So whether inside or outside, he's got multiple ways to beat you. While guys like Larkin and Scott can kill you just as effectively, I feel like the Illini can survive typical games from them. Where we'll be in real danger is if Nnanna Egwu gets in foul trouble -- never happens! -- and Kadji gets to spend time with Tyler Griffey guarding him.

Miami is too good an offensive team to sit back and hope Brandon Paul can be a monster. So we're going to need D.J. Richardson to play well too, but while Paul and Richardson were enough to survive Colorado, our offense will need even more help against Miami.

And that's where Tyler Griffey can come in. Just like Brandon and D.J, this will be Tyler's last game if he doesn't play well. He hit his first three on Friday and didn't make a shot for the rest of the game. With Miami's size Griffey can help alleviate a lot of problems by helping the Illini space the floor with his three-point shooting.

Fornelli: I really don't want this season to end because it's a long summer until football season and football season is even longer. Sadly I just don't see any other outcome. Yes, Illinois can beat Miami, but too many things have to go right in order for that to happen, and it's been too long since the Illini played that kind of game to make me think it's going to happen now. Miami 76 Illinois 64 (15-6 on the season).

Primiano: The Hurricanes are a very good, yet flawed team. If we can come out guns blazing and avoid a second half slump, we have every chance to actually upset Miami and move on to the Sweet 16. But I just don't see it happening this year. Maybe next season, definitely in two, but not yet. Miami 76 Illinois 64 (13-8 on the season).