The goal this season may have been just to make the tournament, but now that we're here we might as well win the fucking thing.

Share All sharing options for: Win Or Go Home

The wait is finally over. After a year's hiatus the Illini officially return to the NCAA Tournament this afternoon in Austin, Texas, and if you're like me, you're nervous right now. Not scared, just nervous. A day like Thursday, when you don't have a team to root for save your bracket in this tournament, is all about fun.

A day like today, however, when your team is playing and the entire season is on the line, it's different. I don't need the Illini to win today because I already consider this season a success, but we're here now, aren't we? We might as well win another six games while we're at it.

And if we're going to win six games we've got to win this first one.

Colorado isn't going to be an easy team to beat, though. If you look at Ken Pomeroy's projections for this game the Illini are going to win 52% of the time. The projected score? 65-64.

So, yes, this is an evenly-matched game.

As I've already talked about this week, Colorado isn't a team I know a ton about because I haven't seen them this year, but I've learned more as the week has gone on. And I'm confused. When it comes to this matchup the bad news is that Colorado's opponents hit only 32.3% of the threes they take. Which isn't a great number, as it ranks only 92nd in the country, but it's still a good number. Where things get confusing is how many threes Colorado surrenders.

Teams are shooting threes 35.9% of the time against Colorado which ranks 278th in the country and is more than all but seven other teams in this tournament.

So are opponents taking threes against Colorado because they're getting open looks and just missing, or is Colorado getting a hand in their face and they're just taking them anyway? I lean toward the former, and I think we all know that the Illini will be taking a ton of threes today. Any day, really, as 41.2% of our shots this season have been threes.

Which is really what all of this is going to come down to for the Illini. Sure, we're the older team with a lot more experience, but I'm not sure that means much considering the lack of tournament experience on both rosters. No, as is usually the case it's going to come down to whether or not we make shots. If the Illini are not only getting looks at threes, but making them, they're going to win. This is not exactly a great revelation.

It's the team we've seen all season and it's a story we've followed all season. The only thing that's different today is that if we don't shoot well today there are no more shots tomorrow.

It's the NCAA Tournament. It's won or go home.

You've already booked the hotel rooms for the entire weekend, might as well stick around for the whole thing. 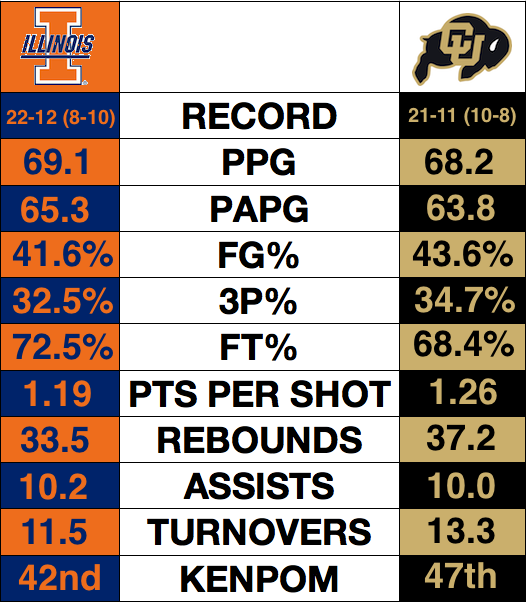 Spencer Dinwiddie is Colorado's leading scorer and he gets to the free throw line with a greater frequency than most players in the country, but I feel like the Illini can negate his impact a bit if they go to a zone defense more often. Of course, I don't know that the Illini will go to the zone all that often. Most coaches don't want to shake things up in the tournament. Still, I don't think Dinwiddie is going to be the guy causing Illini fans to curse at the television.

No, that would be Andre Roberson, who is averaging a double-double this season. Roberson's 11.3 rebounds per game was good enough for second in the country. Oh, and he also happens to be Colorado's best defender and he'll be tasked with Brandon Paul today. So even if he doesn't fill up his own box score he is going to have a direct impact on Brandon Paul's.

If you saw the quotes from Colorado players yesterday they didn't seem to make a secret of the fact they think that in order to beat the Illini you have to stop Brandon Paul. And by and large, this is not a false statement. Of course, as we're well aware, the Illini can win if Brandon Paul is not playing great. We saw that this season when we were winning five straight games as Brandon was struggling.

The reason we did that was because D.J. Richardson wasn't playing poorly. He was wonderful, and we need that D.J. Richardson back today. Richardson has struggled as of late. In our last four games Richardson is averaging 9.5 points per game while shooting 25% from the floor (12-48) and from three (7-28). That cannot be the case today, and while D.J. is the guy we need to step up, he's not the only one.

If Colorado is going to focus on Paul so intently then guys like Tracy Abrams, Tyler Griffey, Joseph Bertrand and Nnanna Egwu are going to get open looks too. They need to hit them.

Fornelli: I could lie to you and pretend I really know what's going to happen today, but as I've already gone over, I don't. This Colorado team is mostly unknown to me, but it's a team that seems similar to the Illini if not in style, but in production. Which leads me to believe that this is going to be a close game that is going to come down to a few possessions on both ends of the court. I also think that the first team to 60 is going to win. And I think (hope) that team is going to be the Illini. Illinois 60 Colorado 55 (14-6 on the season).

Primiano: I know practically nothing about Colorado other than what I have read. Which is not much. So let me tell you a fun fact: German shepherds and basset hounds are the most likely dogs to get panosteitis. Illinois 68 Colorado 61 (12-8 on the season).