Kendall Gill is living the dream

This story is almost too perfect to be true.

On Tuesday former Illini Kendall Gill allegedly punched former Northwestern Wildcat Tim Doyle. No, really. Gill currently works as a Bulls analyst for Comcast Sportsnet in Chicago and Doyle was in the studio on Tuesday night to tape an episode of Sports Talk Live. While on the show Doyle apparently made some comments about Gill's analysis of a goaltending call on the Bulls Joakim Noah on Monday.

The altercation happened right in front of me as Mr. Doyle and I were walking through the CSN newsroom on our way out of the building.

Mr. Gill approached Mr. Doyle and called him out for his comments, which escalated to a shoving match and ultimately Mr. Gill throwing a punch at Mr. Doyle. The two bumped up against a sign on the wall and a small amount of blood was drawn (though it was unclear exactly how) before the two were separated.

Gill has been removed from the air pending an investigation, but frankly he should have gotten a raise. 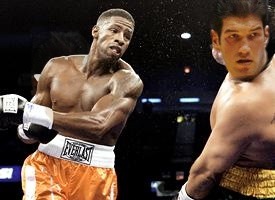