And So This Story Approaches Its End

It's Senior Day at Assembly Hall as the Illini faithful prepare to watch Brandon Paul, D.J. Richardson and Tyler Griffey play in front of the Krush one last time.

Share All sharing options for: And So This Story Approaches Its End

If you haven't read this post from Jack Cassidy yet about what this game means not just for our senior players, but for those senior students who came here at the same time as Brandon Paul, D.J. Richardson and Tyler Griffey, head over there first. You won't be disappointed.

As for today's game, it feels like this is a day that Illini fans have waited for a long time. However, I don't think it feels the way it was expected to.

For the most part I think the four years of Paul, Richardson and Griffey will feel a bit like a disappointment. They were the main members -- along with Joseph Bertrand -- of what was supposed to be Bruce Weber's best recruiting class ever. Whether fair or not the expectations for these guys was that they would lead the Illini to a few Big Ten titles and maybe a Final Four.

Of course, we know that's not how it went at all. Instead they only made one NCAA tournament, went to the NIT once, missed the postseason altogether last year and helped get Bruce Weber fired.

The last few weeks have been a bit of a salvation for this class, though. As I alluded to already, a few weeks ago this was a day many Illini fans were looking forward to because they couldn't wait to move on. It was nothing personal against any members of this senior class -- at least not on my part -- but we were all in a rush to move on and let the John Groce Era truly begin.

Instead it was these three seniors the Orange Krush will say goodbye to today that brought this season back from the brink. The Indiana win will likely be the epitome of their time here. All three of them had better games as individuals, but it was that night against the Hoosiers that they came together to play their best game as a unit.

It was Brandon scoring all night to keep the Illini within striking distance.

It was D.J. who led the late charge to tie the game and swiped the ball from Victor Oladipo to set up that final play.

And it was Tyler who expertly ditched the Indiana defense before Brandon found him all alone under the rim.

Together the three of them combined for 58 of our 74 points that night, grabbing 11 rebounds and getting 5 steals.

I don't know that the one victory could truly make up for the disappointment of the previous seasons, but it certainly made for a better ending to the story than it would have been. Before we were looking forward to this day just for the relief of it all finally being over. Now the day is here and I can't help but feel a bit sad about it all.

Yes, I'd have loved to have reached this part of the story earlier in the novel, but it's here now and it's important to remember something about it.

While today may be the last time these three will play at home in the Assembly Hall, but that doesn't mean there still aren't some chapters that can be written. 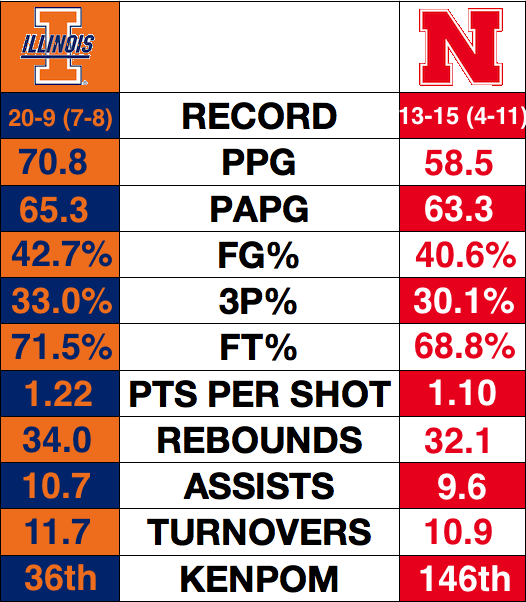 Honestly, I'm not really sure there's a player on this Nebraska team that has the capability of truly being a pain in the ass. When we last met these Cornhuskers it was Dylan Talley who led them with 16 points, but he did not shoot well and got seven of those points from the free throw line. However, I do suppose it's possible that should Talley find himself in some kind of zone and absolutely go off this afternoon, then yes, he'll become a major problem.

It was in the last meeting that the Redemption of D.J. Richardson truly began, as he poured in 30 points to make the game a lot easier on us. He's continued to play well so I'd like to see that continue. Which means that the next logical spot to go would be Brandon Paul, as he's still not entirely out of his funk either. But that's not where I'm going, either.

You know what I truly want to see happen today? Well, while I've already written about their Senior Day, there's a different reason I want to see D.J, Brandon and Tyler Griffey all have big days today. That's because it's not just their Senior Day. Today will be the last time Kevin Berardini suits up for an Illini home game as well as he's forgoing his eligibility next season. This year Kevin hasn't taken a single damn shot as all five of his points have come from the free throw line.

I want the Illini to build a big enough lead in this game so Kevin can not only get a few minutes in his final home game, but to take a damn shot. I don't care if it goes in, I just want him to take one. Step up, Kevin. Get yours.

Fornelli: You'll notice that I didn't write much at all about Nebraska in this entire preview. You probably think that's because I don't think the Cornhuskers have much of a chance today, and you're not entirely wrong. Yeah, we've seen some strange things in the Big Ten in the last week, but none of them involve a road team pulling off a shocking upset. So while in some strange way it would seem fitting for this class' Senior Day to be a home loss to Nebraska, I don't think it has much chance of happening. Illinois 77 Nebraska 60 (9-6 on the season).

Primiano: Nebraska somehow beat Iowa, but that was at Nebraska and not on Senior Day. Simply put there is no way the boys drop this one. And if Mike LaTulip doesn't get to guard Andre Almeida i will be incredibly disappointed. Illinois 73 Nebraska 58 (8-7 on the season).