And here I was hoping the Hoosiers would never have a chance to get it.

Listen, I don't have to tell you that I hate Indiana, it's well known. We all hate Indiana, and for good reason. Mostly because it's Indiana, but for other reasons as well. Some of which Mark did a very good job of going over already.

But there's a new reason to hate Indiana.

You see, earlier this season when the Illini had that improbable comeback against the Hoosiers that ended with an uncontested layup by Tyler Griffey, part of the fun of stealing that game was knowing that Indiana wouldn't get a chance to pay us back in Bloomington.

It was the perfect crime.

But now, thanks to Brandon Paul's buzzer-beating jumper to eliminate Minnesota, Indiana gets another chance. Don't get me wrong, this also gives the Illini a chance to beat Indiana again, this time possibly costing them a #1 seed in the NCAA Tournament, so we still have plenty to gain ourselves.

It's just I don't want to give Indiana a chance at redeeming itself.

And let's be real, if the Illini play the same game against Indiana that they did against Minnesota, they are going to get the shit kicked out of them. I was wrong when I said that whichever team shot better was going to win the game, as the Illini had an eFG% of 37.5% -- which is terrible in itself, but not as bad as the 22.5 eFG% Illini players not named Brandon Paul shot -- compared to Minnesota's much more acceptable 47.5%. What happened that I could not anticipate was that Minnesota would turn the ball over 17 times.

I don't think that the Illini are going to beat Indiana if those numbers don't improve greatly, and in all honesty, there's not a lot of reason to think that they will. In the last six games the Illini are shooting 36.3% from the field and 29.8% from three. Their eFG% in that span is 43.3%.

All these numbers are horrible, but they don't truly tell the whole story of how horrible they are. No, for that you should look at this table I made.

Yep, we're pretty much a one-man show right now, and this is just further proof. And while one-man shows can be great, they seldom work against teams as deep as Indiana. 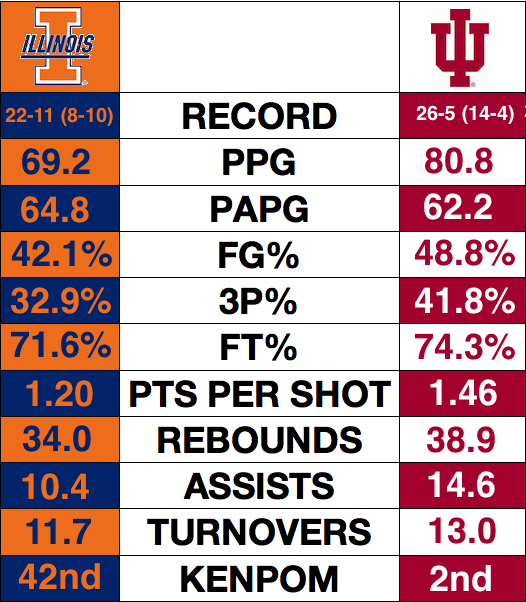 It's hard to pick out only one player on this team because they're pretty much all a pain in the ass, but I'm going to take the obvious choice and go with Cody Zeller here. Nothing gives Illinois more trouble than big men who can score and defend, and Zeller can do both.

Well, except on plays in the final seconds.

Anyway, Zeller finished the first meeting with 14 points and 9 rebounds, and something tells me that if Tom Crean has half a brain, and that half the brain of the half-brain he has does more than yell at people, Zeller will get a lot more than the six shots he did against us the first time.

In the first game Brandon Paul had a pretty decent night. He finished with 21 points and was a big reason why we were able to beat the Hoosiers. However, he had quite a bit of help that night as well. While Tyler Griffey's 14 points were huge, the biggest boost the Illini got that night came from D.J. Richardson, as he finished with 23 points and was 4-for-8 from three.

D.J.'s shooting woes continued Thursday, as he was 2-for-12, but he hit the last shot he took and it was a huge shot. Hopefully with the quick turnaround that's the shot that brings his confidence back and allows him to step up and give Brandon Paul some help.

Fornelli: While I'd love to see the Illini beat the Hoosiers yet again that doesn't mean I'm going to predict it happens. I mean, it could, we've proven that anything's possible, but with the way we've played lately I'm just not sure we can rally in time to pull it off. Of course, we were playing much worse in the six games before beating Indiana the first time so maybe.....oh my god, we could do this. I'm still not going to predict it, but we could. Indiana 73 Illinois 62 (13-6 on the season).

Primiano: As much fun as the buzzer-beater against the Hoosiers was earlier this season, I don't really know that we have another one in us. I see it being a close game for a while but Indiana pulls away late and we land a 7 seed when everything gets announced Sunday. Indiana 70 Illinois 62 (11-8 on the season).