Indiana is a lesser version of Illinois.

Share All sharing options for: State Of Hate: Indiana

Since the last State of Hate post worked well enough to generate a buzzer beater over the Gophers in the opening round of the Big Ten Tournament, it only seems right to make one for our next opponent, though it shouldn't take much to make you hate the Indiana Hoosiers.

Why you should hate Indiana 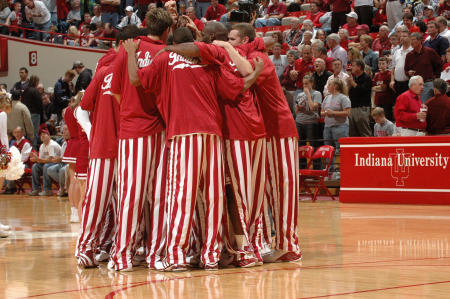 I don't care why they wear them. I just know they are hideous and awful and representative of everything that sucks. You look like idiots.

Tom Crean is a preening jackass. He looks like a shyster and screams obscenities at former assistants. He pouts after losses, extending the waits for the press conferences, you know like a real professional.

The entire state of Indiana is little more than a crappier version of Illinois. Their major city is a lesser Chicago. The Pacers are a less talented and less meaningful franchise than the Bulls. The Colts are painfully bland. Kentuckiana is the most terrifying place on the planet.

All of their food is mayonnaise based.

The state of Indiana is where two of the most overrated sports movies of all time take place: Rudy and Hoosiers. True, Rudy is a Notre Dame movie but we must punish the state for allowing such things to happen. Underdog stories sell well in Indiana because no one from the state of Indiana has ever accomplished anything. No one moves to Indiana by choice, you get relocated there for losing the big account or sleeping with your boss' wife. There is a fate worse than death or being unemployed: it's called being forced to live in Indiana.

Congratulations! Along with Nebraska and Iowa, you're one of the few states in the conference that doesn't have a professional baseball team! Oh, you have a AAA team? That's cool, for what major league club? Oh, that's right.

When you're not good enough for Pittsburgh, you have to live in Indy.

Their claim to fame is the Indianapolis 500, which is maybe the most boring nationally known sporting event of all, including the major horse races. At least the horse races have the decency to be finished incredibly fast. But in true Indiana fashion, the Indy 500 has a never-ending buildup followed by an unrelenting stretch of monotony. It is the perfect metaphor for a life spent hoping for more dashed in the plains.

Literally every state that borders Indiana is more interesting than it. Sure Ohio is a post-industrial wasteland and Kentucky has seven teeth to be shared amongst the entire populace, but at least they have character! Indiana isn't even vanilla ice cream. It's the salt you use to make homemade ice cream. Have you ever licked that stuff? It's terrible.

The reason Parks & Rec works so well is that no one could possibly believe that a town in Indiana could ever be that interesting. It's just not feasibly possible, which makes Parks & Rec one of the greatest current works of American fiction. They're making you do the impossible, which is to say caring about people from that abomination we share a tri-state highway system with.

Yes, they technically have ownership of Three Floyds Brewery, but let's be honest here, Munster is still part of Illinois, just like Carbondale is part of whatever godawful state we border that far south (not looking it up, everything south of Champaign-Urbana is a blight on our beautiful landscape.

Minnesota is an awful place, but we could at least entertain the idea of one day selling it to Canada. What are we going to do with Indiana? It's just sitting there like that donut full of lemon jelly. Even the big guy in the office doesn't want to eat that. Consider yourself lucky to be part of the Midwest so we can't trick another country into claiming you.

Indiana, you are the worst.