Make Your Shots And Move On

The Big Ten Tournament will start on Thursday morning with the Illini taking on a familiar opponent.

Share All sharing options for: Make Your Shots And Move On

When you're facing a team for the third time in two months it's hard to be caught by surprise. Particularly when that team is a team very much like your own, only a much better rebounding team. Even when you look through the box scores of the previous two meetings there are no secrets to how the winning team won either matchup.

In January the Gophers shot 60% from three and the Illini shot 13%. Minnesota won by 17.

In February the Gophers shot 29% from three and the Illini shot 48%. Illinois won by four.

So if you're looking for me to break this game down, that's really all I can offer you. Whichever team shoots better is going to win.

Which isn't necessarily good news for the Illini. In the last five games the Illini have shot 37.2% from the field and 30.9% from three. Their eFG% in that span is a rather unimpressive 44.5%. They've also gone 2-3 in those five games, with the wins being lackluster victories over bad teams in Nebraska and Penn State.

As for Minnesota in that same span, it's a mixed bag as far as the Illini are concerned.

The Gophers are also 2-3 in their last five games, and they've shot 41.1% from the floor and 26.1% from three for an eFG% of 45.3%. So while they're shooting better than Illinois overall, their eFG% is just as uninspiring. However, if you only look at Minnesota's last four games and remove the 71-45 debacle against Ohio State, things begin looking a little better for the Gophers.

Their field goal percentage increases to 43.6% while the three-point percentage is still only 28.8%. The difference is that their eFG% increases to 48.2% in the last four games. A number that still isn't good, but is quite a bit better than Illinois'.

Still, at the end of the day, neither of these teams comes into this tournament playing its best basketball. So as is often the case when March approaches, the team that gets hot will have the advantage.

We just have to hope its us. 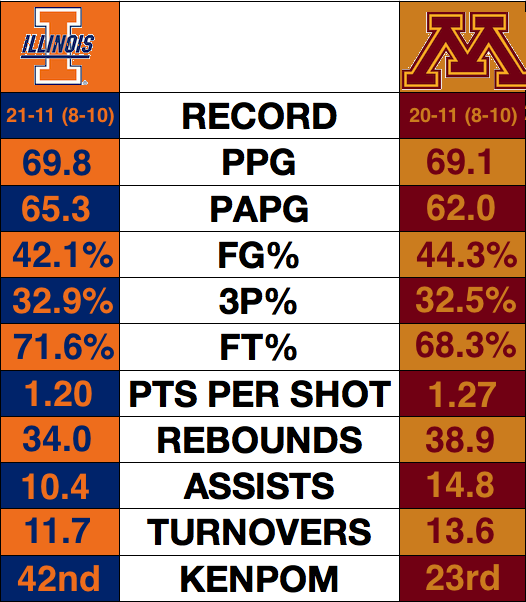 Through the first two games Trevor Mbawke has looked like a beast of a man going to town against a team without a front-court presence, and that's because that's exactly who he has been. In the two games against Illinois Mbakwe is averaging 16 points and 10.5 rebounds, with 3.5 of those rebounds coming on the offensive glass. We simply don't have a real answer for him, and we won't on Thursday.

So he'll be a pain in the ass no matter what, however, the guy who could kill us is Andre Hollins. I just spent nearly 500 words telling you that this game is going to come down to which one of these two cold-shooting teams can finally find the bottom of the bucket, and Andre Hollins is Minnesota's best bet. When Minnesota beat Illinois Hollins was 6-of-10 for 22 points. When Minnesota lost to Illinois Hollins was 2-for-10 with 8 points.

See how that works?

This is so obvious already, isn't it? Yeah, I want D.J. Richardson to get out of his funk, and if he does he could carry the Illini to victory. But the guy I'm looking at today is none other than Brandon Paul. While the team has struggled, by and large, Brandon's been the only guy shooting good-ish. I'd like to see that improve against Minnesota.

The good thing about this conference tournament format is that you play every day. Which could work to a player like Brandon Paul's benefit, as well as a team like Illinois' benefit. If Brandon and this team get hot, there's nobody in the country they can't beat, we've seen that.

Fornelli: Honestly, you can flip a fucking coin and have just as much chance of being right as if you spend a lot of time thinking about it. But I didn't flip a coin, and the more I thought about it the more I was able to convince myself that the Illini will actually pull this out. The reasons? Well, the game is being played in Chicago in a building the Illini are already very familiar with considering they've already played once there this season. They also hit 48% of their shots the last time they were in the United Center, so because of those factors that don't really mean anything I'm saying that the Illini win. Illinois 63 Minnesota 59 (12-6 on the season).

Primiano: The Gophers have pretty much been the inbetween of us and the Hawkeyes this year. We're all firmly entrenched in the secondary tier of the conference, but our great OOC schedule has us in the tourney while Iowa's weak OOC has them needing to win the Big Ten Tournament to go dancing. Minnesota needs to beat us to get off the bubble, so they're going to come out hungry in what could be Mbakwe's final game (just kidding, he'll get another year somehow yet again). But that doesn't matter. This is John Groce's time of year and we're going to be playing the Hoosiers again. Illinois 77 Minnesota 65 (10-8 on the season)