Plenty Left To Play For

It's the final game of the regular season and the Illini could really use another win to get to 9-9 in the conference. Oh, and for other reasons that are a lot more important than that.

Share All sharing options for: Plenty Left To Play For

As I went over yesterday, there's quite a bit to win or lose in this final game of the regular season. Simply put, winning today would make a Big Ten Tournament run quite a bit easier.

If the Illini beat Ohio State for the second time, they will become a #7 seed in the BTT and play Nebraska in the first round. Should they lose they'll remain an #8 seed and play Minnesota.

It would also mean that Purdue -- yes, Purdue -- would finish as the #7 seed ahead of the Illini in the tournament.

Now, aside from the slightly insulting fact that we'd finish behind a team that finished the regular season with a 15-16 record, a loss would not be good. It's not just playing a tough Minnesota team in the first round instead of a Nebraska team that we should beat. No, it's the fact that if we do beat Minnesota in the first round we'll be rewarded with Indiana in the second round.

Now, I know we've beaten Indiana already and there' isn't exactly an "easy" matchup against anybody on the second round, I'd much rather try to put the best team off my opponent list for as long as possible.

This all applies to the NCAA tournament as well. A loss against Ohio State today almost assures that we're going to be an #8 or a #9 seed there as well, which would mean another tough first round matchup and a likely #1 seed in the second round.

A win today and a win in the first round of the BTT tournament could get us up to a #7 seed, which is still tough, but an easier road to manage.

Too bad Ohio State has a ton to play for today as well. 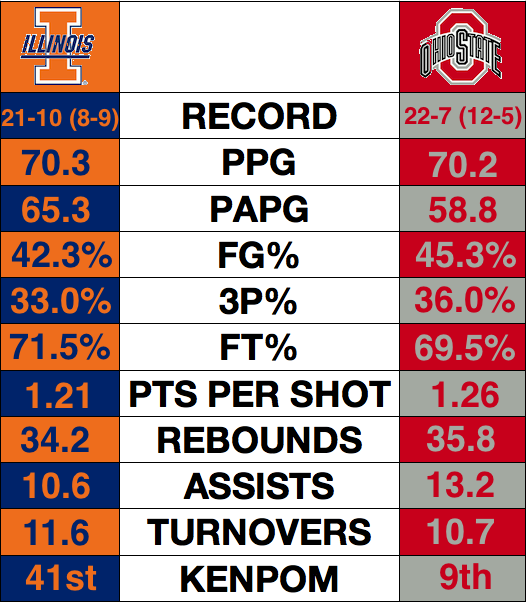 The obvious choice here would be Deshaun Thomas, because he's scored over 28% of Ohio State's points this season, never scoring less than 11 points in any single game. But that's just it. Deshaun Thomas always scores points, but he's not a pain in the ass because Ohio State's lost plenty of games when he scores. Hell, he scored 24 points against the Illini earlier this season and that didn't stop the Buckeyes from losing by 19.

No, the true pains in the ass here are Aaron Craft and Lenzelle Smith Jr. If you limit their offense you can beat Ohio State. Though the reason Craft will be a pain in the ass today has more to do with his defense, as he's one of the best on-ball defenders -- or the best, depending on who you ask -- and he's going to foul Tracy Abrams and not get called for any of it because of his reputation.

It'd be nice if D.J. Richardson could get his groove back. It's not as if D.J. has played poorly lately, because he hasn't. However, he was pretty much non-existent for a while against Nebraska even if he did finish with 13 points, and he just had a poor shooting night against Iowa. He also had a bad night against Ohio State in Champaign earlier this year and we still won, but if we're going to repeat that feat we'll need him to have a big day on Sunday.

Fornelli: Ohio State is very good at home so this one isn't going to be nearly as easy as the win in Champaign was, and I do think the Illini have a chance to beat the Buckeyes today. It's just, I don't think they're going to do it. Not unless we shoot the lights out, anyway, and with the way Ohio State defends that's not going to be easy. Throw in the fact that the Buckeyes would like a bit of revenge and are still playing for a #2 seed in the BTT and a possible split of the Big Ten title, and I'm just not feeling an upset today. Ohio State 75 Illinois 63 (11-6 on the season).

Primiano: I'd like nothing more than for our Illini to swoop into Columbus and steal a win from the Buckeyes who may or may not remain on cloud nine after beating the Hoosiers. I just don't really see us sweeping them for the season. A win would be great for our eventual seeding, but it's not likely. Ohio State 76 Illinois 69 (9-8 on the season).