Bracketology: Beating Indiana Does A Body (Of Work) Good

The one thing most Illinois fans want to know after Thursday night's win over Indiana is what it means for their tournament chances. Here's a hint: good things.

Share All sharing options for: Bracketology: Beating Indiana Does A Body (Of Work) Good

It is truly amazing how one win can change your perspective on everything. Before yesterday's game against Indiana I, along with most Illini fans, was resigned to the fact that we would probably be missing the NCAA tournament again this season and we were in for a few more weeks of pain.

But then that game happened and the Illini added another very impressive win to its resume. I mean, how many teams are 3-7 in their own conference, yet can claim four wins over teams currently ranked in the top 15 of the AP Poll? Including a #1?

Obviously, last night's win really improved our tournament chances, though nothing is guaranteed. Illinois still needs to win some basketball games, but the mountain certainly looks a lot easier to climb, and at the moment both of our bracket pundits have the Illini making it.

We'll start with Jerry Palm, who has never removed the Illini from his bracket and was rewarded for his faith last night. He currently has the Illini as an #8 seed playing Oregon in the first round of the South Regional. 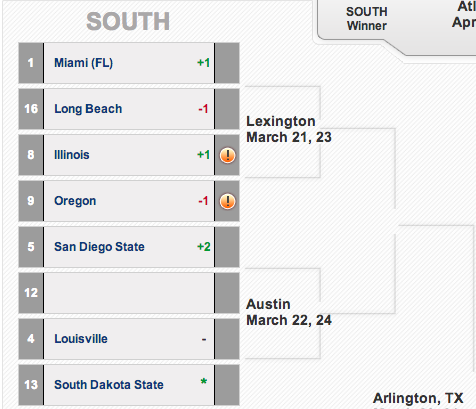 As for Lunardi, he had knocked the Illini out last we checked in, but he has since amended this egregious error. Though Lunardi does have the Illini needing to play Arizona State for the right to get into the tournament as an #11 seed to play San Diego State in the Midwest Regional. 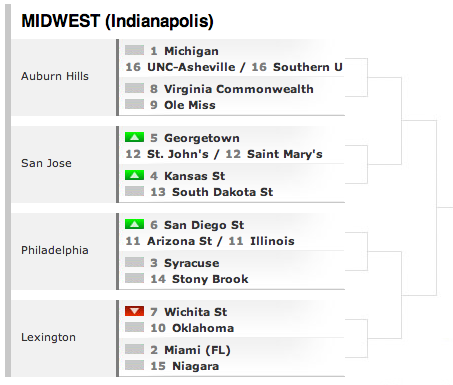 As for our chances of getting in, I think Brian Cook over at MGoBlog had a pretty good take on our chances of qualifying as an at large this morning.

Meanwhile for, you know, the Illini: their quest to be an at-large team with an under .500 conference record is looking pretty good right now. Adding Indiana to their pile of skulls gives them the good wins of a top four seed and they've got a few more shots at adding to that pile. I think even 7-11 might get them in now. Beilein's bubble resumes with 20-12-ish teams were considerably worse since the Big Ten wasn't nearly as good and they didn't have a pair of nonconference wins on par with Gonzaga/Butler, and on Selection Sunday they were easily in.

So... who wants to play a John Groce team that consists of a bunch of shot-jackers who can burn your tourney to the ground if you catch them on the wrong day? That's nobody, especially not me.

I have to say, I tend to agree with him, but I cannot stress how important it is that the Illini finish the season beating the teams they're supposed to beat from here on out. And a win or two in the Big Ten Tournament would certainly help out as well.