Just what you want to see when you're not playing very well and need a win: the #1 team in the country.

In an odd way, the Illini may actually have a better chance of beating Indiana tonight at Assembly Hall than they did against lesser teams like Northwestern and Wisconsin. In fact, there may be a few Illini fans out there right now who think that Indiana is ripe for an upset coming off a big win against Michigan and picking up that #1 ranking.

The top-ranked team in the land has made a habit of falling lately.

And with a road trip to Columbus to take on Ohio State next, it's easy to think that Indiana could get caught looking past an Illinois team that hasn't looked like a threat to anybody but itself in recent weeks.

This is the same Illinois team that's beaten Butler, Gonzaga and Ohio State, and also played close games against Missouri and Michigan State outside of Champaign.

But don't fool yourselves, please. The Illini aren't going to pull an upset of Indiana tonight. Even if Indiana is looking ahead to Ohio State, it's still a much better team than our Illini. 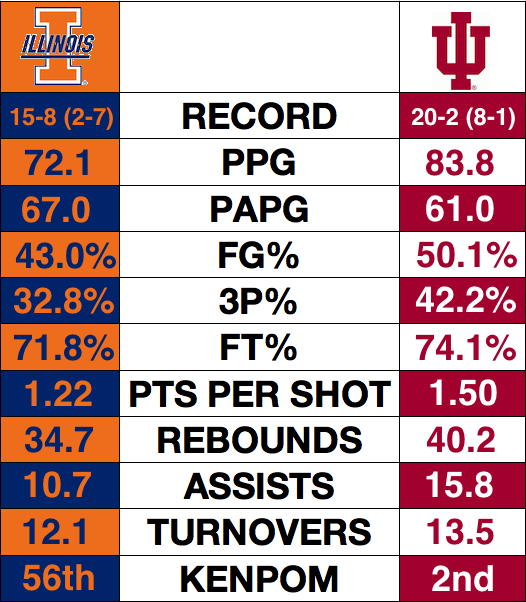 Good luck trying to pick out only one guy on this Indiana roster that's going to wreak havoc. They all are. However, since I enjoy watching Victor Oladipo play, I'm going to go with Cody Zeller here. Now, I feel that Zeller is one of the most overrated players in the country, but that doesn't mean he's not leaps and bounds better than anybody the Illini have down low. In my opinion it's pretty much a given that Zeller will find himself with a double-double tonight.

I've pretty much given up on Brandon Paul finally waking up and saving this team, so I'm turning my attention to a slightly lesser lost cause. I'm looking at you, D.J. Richardson. I know you have a tendency to disappear against good teams, but if there was ever a night we needed you to rekindle that Nebraska fire you had, it's tonight.

Fornelli: I think I've made my feelings about what's going to happen tonight pretty clear already. Indiana 86 Illinois 67 (5-4 on the season)

U-God: Last night's Kansas/TCU game was a prime example of anything being able to happen in a conference game, which might give some Illini fans hope. The gap between us and Indiana isn't nearly as vast as that between those two Big 12 squads, but Indiana is better than the Jayhawks. Indiana 85 Illinois 72 (3-6 on the season)