Bracketology: Lunardi Knocks The Illini Out

Not a shock after the home loss to Wisconsin

Share All sharing options for: Bracketology: Lunardi Knocks The Illini Out

It felt like it was only a matter of time, but in his latest set of brackets ESPN's Joe Lunardi finally removed the Illini from the fold. That's the kind of thing that happens when you've lost six of your last seven and eight of your last 11.

If there's any consolation with Lunardi, though, it's that the Illini are just on the brink as the first team listed in his "First Four Out," just ahead of BYU, Maryland and Alabama. So a win over Indiana on Thursday and we'll be right back in!

Now, just because Lunardi has the Illini on the outside looking in, that doesn't mean there isn't any hope. We can always hope that CBSSports.com's Jerry Palm ends up on the selection committee before that final Sunday of the season.

In Palm's latest bracket he still has the Illini in, though they're teetering on the edge. Still, he has the Illini as a 9-seed, playing Oregon in Kansas City. And of course if Illinois got past the Ducks they'd find themselves playing #1 Kansas in the second round because of Bill Self. 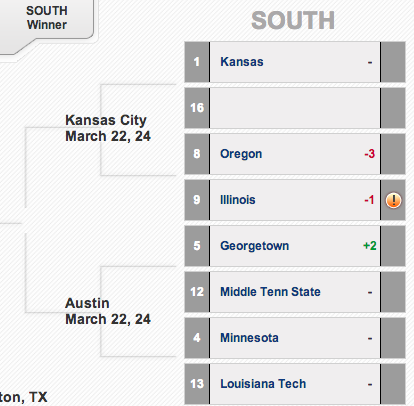 Though I can't help but feel it's only a matter of time before we're out of Palm's projection too. Such is life in Illinois sports these days.