The First Of Many Must Wins

It may not feel like it but the Illini have a chance to get to the tournament this season. To do so this afternoon's game is one they're going to have to have.

Share All sharing options for: The First Of Many Must Wins

I went over the formula I think the Illini will have to follow the rest of the season to get into the NCAA tournament last week. Being the genius that I am I listed the Michigan State game as a loss. Today's game against Wisconsin I marked down as one of the six games the Illini would have to win.

Though when you consider that the Badgers are the first team the Illini have played twice this season, and that first meeting ended up 74-51 in Wisconsin's favor -- Bo Ryan's boys had a 14-0 lead before a Brandon Paul free throw put the Illini on the board, and the 14-1 score looked more insulting than the shutout -- it's easy to think that not much is going to change this afternoon in Champaign.

But that's just it. Today's game is in Champaign, and ever since destroying the Illini in Madison the Badgers have stumbled a bit. They'd follow up the Illini win by going on the road to beat Indiana, but since then the Badgers have lost three of their last four. In that stretch the Badgers are shooting 36.7% from the floor and averaging only 51.75 points per game.

In other words, Wisconsin was likely at its peak ability during those Illinois and Indiana games. Much like the Illini before the calendar flipped from 2012 to 2013. And that means Wisconsin can be beaten, and I believe the Illini can do so.

The loss to Michigan State hurt because of the blown lead, and I agreed with John Groce's assessment of his team not being tough enough afterward. However, in that same game we also got a reminder of how good this team can be when it's playing well. It was only there for 20 minutes, but it was there on the road against a very good team.

A team that's better than Wisconsin.

It's also important to remember that in the first meeting Wisconsin shot nearly 44% from three while the Illini went 2-for-14 from deep. Odds are those numbers are going to even out a bit today, which will be an advantage for the Illini. 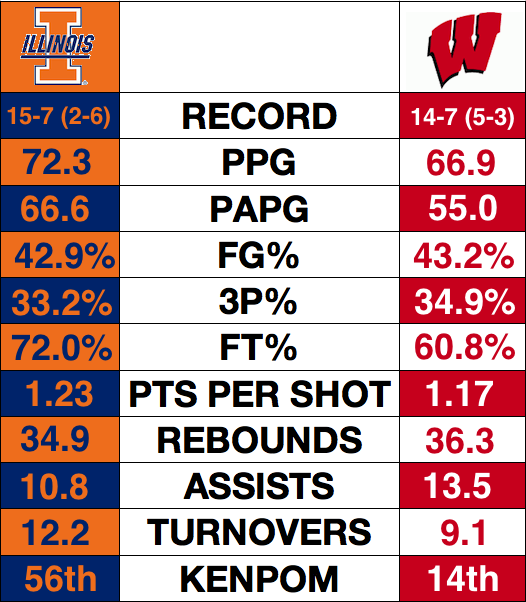 During the first meeting Jared Berggren was a giant pain in the ass. He led Wisconsin with 15 points, but what was much more impressive than his point total was the amount of rebounds he pulled down. Berggren finished with 12 rebounds on the day, 7 of which came on the offensive glass. To put that in perspective, the Illini finished the game with 23 rebounds as a team, with only 8 offensive rebounds. Something that might help keep Berggren from having a similar game this time around is that Sam McLaurin is in the starting lineup instead of Tyler Griffey. With Sam getting more minutes alongside Nnanna Egwu, it could help limit Berggren's ability on the boards. We won't keep him off entirely, but he can't be allowed to have the same kind of game.

In the first meeting Brandon Paul finished with only 8 points. It was his lowest point total of the season, and 5 of those points came from the free throw line, as a lone three-pointer was the only field goal Brandon made on a day he was 1-of-11. I don't need to tell you how important Paul is to this Illini offense -- the only Big Ten player with a higher usage rate than Paul's 29.6% is Penn State's D.J. Newbill at 30.2% -- and I don't need to tell you how frustrating it can be that he's so important. All I can tell you is that if we see the same Brandon Paul we've seen since that day in Madison, we're going to be in trouble. In the first 17 games of the season Brandon was averaging 18.6 points per game. In the last five games he's averaged 14.2 while shooting 38% from the floor. Amazingly the Illini are 1-4 in those games.

Fornelli: If you've been reading this blog since its inception in late October you know that I am far from the EVERYTHING IS GOING TO BE OKAY spectrum of fan disposition. So that means I really think Illinois can win today when I say they're going to do so. One must-win out of the way, five more to go. Illinois 70 Wisconsin 62 (5-3 on the season)

U-God: The Badgers are on a mini-skid of their own right now, just like us! Lake Michigan unity! I'm not completely ignoring how thoroughly they whomped us up in Madison earlier this season. It was awful. But this game is in Champaign and that should mean something, even though I don't know how much of a crowd there will be in Assembly Hall today. Illinois 67 Wisconsin 60 (3-5 on the season)