There's Nothing To Lose

Except a winning streak

Share All sharing options for: There's Nothing To Lose

A few weeks ago I didn't think we'd be in this position. I figured that this trip to Ann Arbor would be Illinois' last real chance to shock the world and maybe steal a tournament berth. But that's not the case, is it?

That was before the Illini won five straight, improving their conference record from 2-7 to 7-7 and adding wins against Indiana and Minnesota to what was already one of the most impressive resumes in the country.

So now we sit here just a few hours away from playing Michigan in Ann Arbor, one of only four regular season games remaining on the schedule, and I'm not worried about a thing. Don't get me wrong, I don't think the Illini are going to waltz into the Crisler Center and beat up on the Wolverines. No, this is a Michigan team that hasn't lost a game at home this season.

It's more that the Illini have absolutely nothing to lose today.

Sure, the win streak can come to an end, and although I'd like to see that thing hit 19 straight wins, that's not going to happen.

No, if Illinois goes into Ann Arbor this afternoon and gets the crap beat out of it, nobody is really going to care. It's not like somebody on the tournament selection committee will say "well I did think Illinois should be in the tournament earlier, but after seeing them lose to Michigan, I'm just not sure."

Though that doesn't mean a win would have huge benefits. Adding Michigan to the row of heads on the wall would be another boost to Illinois' resume, and could possibly bump us up to a fifth or a fourth seed with the tournament is really selected.

And although Michigan hasn't lost at home this year, that doesn't mean the Wolverines are unbeatable. They have not been playing particularly well as of late. Losers of three of their last five game, Michigan has proven to be mortal, particularly in a close home win against Penn State last week.

Not that an Illini fan would know what that's like.

The key as of late, though, seems to be Michigan's three-point shooting. They've managed to shoot 42.9% from the floor in those five games, but they're shooting only 37.2% from three, which on the surface seems really good, even if it's below Michigan's season average of 40.1%. However, when you remove the Ohio State game from the equation -- a game Michigan only won 76-74 even though it was 14-for-24 from three -- it drops to 30.7%.

In other words, like a lot of teams, if you can defend the three-pointer against Michigan you have a much better chance of beating it. The reason the Illini hung in for most of the night with the Wolverines in the first meeting was that Michigan shot only 33% from deep that night. If the Illini had managed to shoot better than 23% from three -- and 37% overall -- then the Wolverines may have been our first huge upset of the season.

But Illinois can win today if they make their own shots and a few other things go right. It's just that a win isn't needed.

And when you consider how things were at the beginning of the month, it's wonderful to know I can just sit back and enjoy this afternoon. No matter what happens. 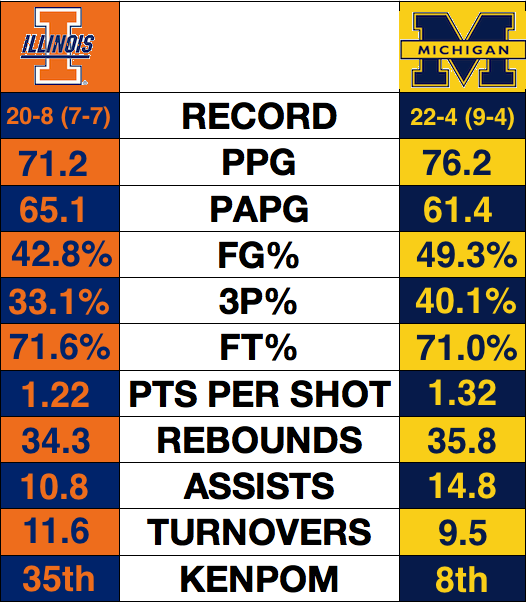 You know, I was going to try to make a case for somebody else on this Michigan team, but why? What's the point? We all know that the best player on this team is Trey Burke and that he's going to be a pain in the ass. He already was in the first meeting, as he led the Wolverines with 19 points to go along with 5 assists, 5 rebounds and 3 steals. As Burke goes so goes Michigan.

I don't know if he'll be starting today or if John Groce will want to keep riding the "hot lineup" but whenever he gets on the court, we're going to need Tracy Abrams to have a big day. Not just offensively where he's going to have to be smart with the ball and limit turnovers in a tough road environment, but on defense where he'll be dealing with Trey Burke all day. Like I said above, as Burke goes so goes Michigan, so if you can detour him a bit, maybe force him to take some side streets that haven't been plowed yet, we can beat this Michigan team.

Fornelli: I know what we can beat this Michigan team. I do. The last few weeks have proven to me that we can beat anybody when we're good, but I just don't think it's going to happen today. And that's alright. Winning is a lot more fun but this loss won't really hurt anything. Michigan 75 Illinois 64 (8-6 on the season).

Primiano: The Wolverines have been stumbling hard as of late, though it's not like we can hold looking like crap versus Penn State against them. Yes, Michigan has been playing their worst basketball of the season recently, but they also haven't lost at home yet. I don't think we're the team to pull it off. Michigan 70 Illinois 64 (7-7 on the season).