So it has been almost exactly a month since we last did one of these rankings, and suffice it to say, everybody has backed away from the bridge. When I last saw you, the Illini were 2-4 after a win over Nebraska and that portly center. The guys subsequently lost three more in a row and sent us all into deep despair. Then, with one wild five minute stretch against Indiana, it all changed. And now here we are, 7-7, comfortably in the tournament, feeling more positive about Illinois basketball than anytime in roughly six years.

Thus, the return of the rankings, a bandwagon jumping if there ever were one. I'm not gonna pop in after a presumed -- if not necessarily assured -- loss to Michigan on Sunday, but I can't wait until after the Nebraska game either. (I'll be flying in from New York to attend that game, by the way. If any Champaign Room readers wanna have a beer, just holler.) The Illini have won five in a row, are .500 in the Big Ten and making everyone feel like life is worth living again. So let's get to it.

1. D.J. Richardson. (Last "week:" 1.) I'm sorry for ever doubting you, D.J. My heart will go on. Richardson is really putting together something special during the Big Ten season, even on nights like last night when the shot isn't falling. Richardson had been so one-dimensional offensively since his freshman year -- and his percentages in that one dimension dropping each year since then -- that a night like last night, when he got to the line nine times, feel like a revelation. (Thought everyone was getting called for fouls last night. Even this guy: 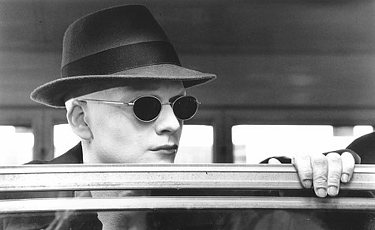 Yes, even Powder was called for a foul last night, and he's too sensitive for this world to even touch anything. Lots of fouls, is what I'm saying.)

Legitimate question: Now that Richardson's defense is roughly equal to Brandon Paul's, and now that the shots are falling, isn't Richardson a better pro prospect than Paul is? Richardson's an inch shorter and a little bit less of a ballhandler -- but just a little bit -- but his shot is light years more reliable. I don't think either one of them is even getting drafted (though you can see Paul sneaking into the second round or even higher if he has a big tournament), but Richardson is the guy to rely on. It's downright thrilling to see him coming around like this.

2. Tracy Abrams. (Last "week:" 4.) It's gonna seem hilarious in a couple of years that Abrams was ever not starting. So here's a thought: Isn't is possible that Abrams is turning out to be that hypothetical, perhaps mythical ballhandling combo guard thought to be the engine of any John Groce system? The one we've been trying so hard to recruit? I wouldn't have thought so even a month ago, but he's the guy who makes everything go: When's he's out, everything's just a little less smooth. Plus, you know, we haven't talked since the Minnesota shot. What a freaking shot that was! If he misses that shot, Minnesota has the ball down one with time running out and a crowd going nuts. Instead:

The Last 42.9 Seconds (via Rob McColley)

In retrospect, that shot is almost -- almost -- as big as the Griffey shot, isn't it? He misses that shot and Minnesota wins, we're at 6-8 right now and sweating that Iowa road game big time. Plus, there's no one I enjoy watching drive the lane more. There's a real chance Abrams ends up an all-timer when he leaves this place, I'm telling you.

3. Brandon Paul. (Last "week:" 3.) I'm starting to realize I'm just never going to make my peace with Brandon Paul. He's going to make the biggest shots and the terrific defensive plays (he hasn't had one of those "yeah, eff off!" blocks in a while, but one's coming), and he's also the guy who makes me throw whatever is in my hand (usually a small animal, perhaps a marmoset) across the room. His shot is all screwed up right now, his lane drives are often insane and he is the only person last night who kept trying to get a foul called but couldn't. (The flailing arms when he isn't fouled: That drives me a bit crazy too.) I still think he has one of those jaw-dropping 35-point explosions left in him, and if it happens at the right time, it could put us in the Sweet Sixteen. Or he could have a sleepwalk game like in the Big Ten Tournament last year and we lose to, like, Iowa State or something. I'll be sad when Paul graduates, but I'll also be a little relieved; his absence will reduce my risk of an in-game heart attack by 10-15 percent.

4. Sam McLaurin. (Last "week:" 6.) We really all need to be giving this guy more love. He's probably the best defensive player on the team, and I love when he does those muscle-up, Shelly Clark-esque, lowered-shoulder rumbles to the basket. No more shooting, Sam, but as far as "using that sort-of-cheap you-can-transfer-after-your-junior-year-and-not-sit-out-a-year rule" people go, we'll remember you a lot longer than Sam Maniscalco.

5. Joseph Bertrand. (Last "week:" 5.) It has been a relatively quiet fortnight for Bertrand; I would have expected him to be more central to a five-game win streak turnaround than he has been. He'll soon be jumping over more things, I'm sure.

6. Nnanna Egwu. (Last "week:" 2.) I've cooled on my "he could be JaJuan Johnson in two years!" talk, if just because he still looks so silly when he dribbles. (His breakaway dunk was like watching your toddler try to climb down stairs.) He's still a mainstay: Do you realize he and D.J. are the only two players to start every game this year? Could you imagine predicting that at this time last year? If he keeps up this rate of improvement, by his senior year, he will be able to fly and also turn himself invisible and oh yeah he'll be able to transmogrify himself into an elephant simply by wiggling his nose.

7. Tyler Griffey. (Last "week:" 7.) Nothing but love for Tyler, though it's worth noting that he's missed his last eight 3-pointers. (He hasn't hit one since the Purdue game.) Still love how he's playing his arse off. Also: Whoever ratted out Griffey on Twitter for getting his girlfriend flowers ... that was unfreakingcool, man.

8. Myke Henry. (Last "week:" 9.) There's clearly something here. The rebounding is a clear problem, but he still has the highest 3-point percentage on the team. When he looks comfortable and is smooth, he almost feels (gasp) like an old Flying Illini member. Merits further study.

9. Mike Shaw. (Last "week:" 8.) Since Shaw just has five points all year, how about some random Illini notes? If you would have told me before the season that Illinois would be 3-3 on the road at this point, man, I'd be doing backflips. Unfortunately: 4-4 at home. This five-game win streak has made me forget some of the uglier moments of this year, but that Northwestern game ... still can't believe that happened. It took a little bit of the fun out of humiliating them on their own court last week. Just a little, though.

11. Devin Langford. (Last "week:" 12.) Apparently he made it into the Minnesota game? I think I missed that. Anyway, here is Devin Langford trying to buy a Rice Krispie Treat and failing.

13. Kevin Berardini. (Last "week:" 10.) Kevin, you should have heard what Mike was just saying about you. I wouldn't put up with that, man. That's just plain disrespect right there.

All right, everybody: MUCK FICHIGAN. Let's go get another one Sunday. Let's get greedy.

Will Leitch is a contributing editor at New York magazine and the founder of Deadspin. He graduated from the University of Illinois in 1997, barely, and has only missed three Illini games in 13 years. Follow him on Twitter @williamfleitch.