Penn State is yet to win a Big Ten game this season and it probably won't get one tonight, either.

Share All sharing options for: Let's Not Be Penn State's First Win

This should not be a game that we have to worry about. Penn State is not a good basketball team. It's a team that is yet to even win a Big Ten game this season, even losing to Nebraska twice. There's no reason to think that the Nittany Lions will come into the Assembly Hall tonight and pick up that first win.

Ken Pomeroy certainly doesn't think so, as the Illini have a 94% win expectancy according to his number. And, honestly, even that seems low.

Of course, there's another factor in play here, and it's Illinois' tendency to lose to Penn State in recent seasons. The Illini have played Penn State ten times since the beginning of the 2007-08 season. Nine of those games have come in the regular season and the other in the Big Ten Tournament.

Penn State has won six of those ten games. They've won two of the four games played in Champaign. Penn State has only won 33 conference games -- not including the Big Ten tournament -- in that span. Which means that nearly a fifth of their conference wins in the last six seasons have come against the Illini.

So, clearly, no matter how bad Penn State is we probably shouldn't take a win for granted.

Of course, that doesn't mean I think there's a lot to worry about tonight. Penn State isn't particularly good at anything. They are one of the worst shooting teams in the entire country, as their eFG% is an embarrassingly low 43.2%. That's good enough to rank the Nittany Lions 327th out of 347 teams. They're particularly bad from three where they're shooting a lowly 27.7%.

Which means your best defensive strategy when playing Penn State is to let them shoot jumpers.

That's because what Penn State does well -- in context of being Penn State -- is shoot free throws. They don't get to the line with alarming frequency, but they're free throw rate is 37.4%. For perspective the Illini are at 30.5%. And when the Lions get to the line, that's where they make their shots. They make over 70% of their free throws, so as long as you keep Penn State off the line, it has a very hard time scoring.

Now, the one thing Penn State actually does well when compared to every team in the country is rebound on the defensive end of the court. Opponents only have a 26.6 offensive rebound rate against Penn State this season, and only 12 other schools are better at it than the Nittany Lions.

Though that alone isn't much of a reason to worry. The simple fact is that if the Illini can stay out of foul trouble tonight and not send the Nittany Lions to the free throw line all night, they're going to win this game. That is unless a Nittany Lion just goes supernova, and since Talor Battle isn't playing -- he's not, right? RIGHT!? -- it shouldn't happen. 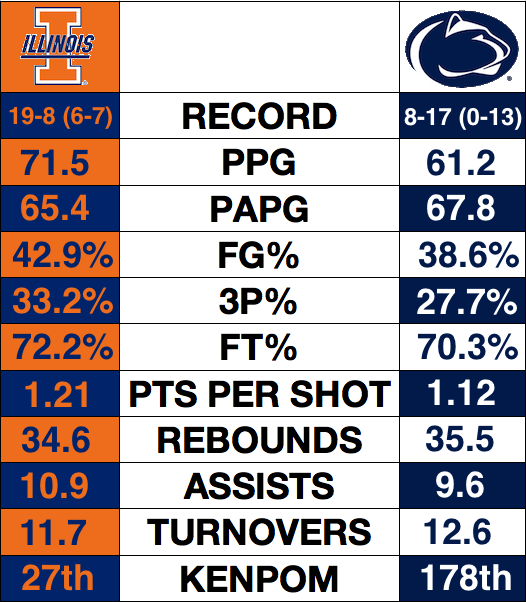 There is only one player in the Big Ten that has a higher usage rate than our own Brandon Paul, and that's Penn State's D.J. Newbill. Newbill is used on 30.5% of Penn State's offensive possessions and he's taken 27.5% of their shots. Since losing Tim Frazier early in the year Newbill, along with Jermaine Marshall, has pretty much become the entire Penn State offense. I mentioned how the Illini will have to keep the Nittany Lions off the free throw line tonight, and that starts with Newbill. His 50.2% free throw rate is the eighth highest total in the Big Ten -- Brandon Paul is tenth. If the Illini keep Newbill in check tonight then Penn State has no chance.

Who else? As I went over earlier today, Brandon Paul has been struggling during this recent four-game win streak. Which is good in that we're proving we can win without Brandon having big games, but at the same time if Paul can get his act together and the rest of the team keeps up its current pace this Illini team could do some real damage in the postseason.

Fornelli: The Illini have had a lot of fun lately with romps over Purdue and Northwestern, and there's a chance tonight could follow the same script. I'm not so sure it's going to happen that way. Don't get me wrong, I think the Illini will win tonight, but I also get the feeling it will be more of a struggle than it should be before the Illini pull away a bit late. Illinois 66 Penn State 54 (7-6 on the season).

Primiano: Everything is going perfectly for the Illini right now, including Minnesota stumbling, which would make this the perfect game for our boys to inexplicably drop. But there is no Talor Battle to crush our momentum and this is one of the worst offenses we'll have seen all season. The streak stays alive and the Illini win. Illinois 78 Penn State 57 (6-7 on the season).