Northwestern has been devastated by injuries this year, but the Illini can't take it for granted on Sunday in Evanston.

Share All sharing options for: Beware The Wounded Wildcats

The good news for the Illini is that it should be obvious to them that this Northwestern team is not one to be taken lightly. This is a lesson you learn when you allow Northwestern to come into your building and beat you by 14 points, which is exactly what happened in mid-January.

Things have brightened considerably for the Illini since then and have taken a turn for the worse for Northwestern. After losing Jared Swopshire last week Northwestern is down to seven scholarship players on the roster. Yet, in spite of the fact they have no depth whatsoever, the Wildcats hung with Ohio State for 37 minutes in Columbus on Thursday night.

While tonight's game in Evanston is one that the Illini should win this Illini team is a team you can take absolutely nothing for granted with.

That's a lesson you learn after taking a win over Northwestern at home for granted a month ago. 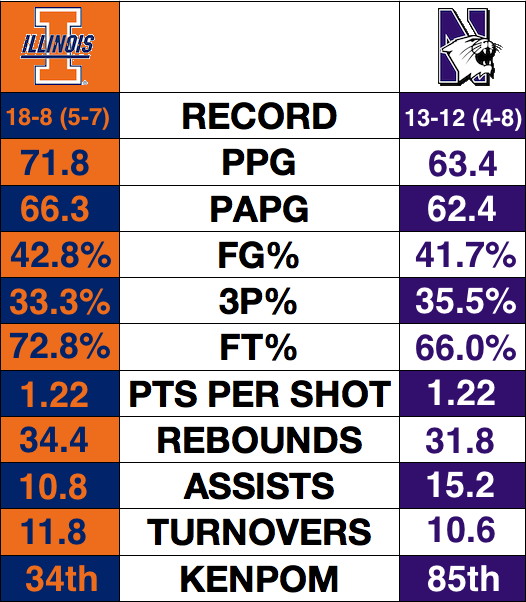 This is not a hard one to pick considering there are so few players left standing on this team, but if the Illini don't limit Reggie Hearn today then Northwestern's chances of winning this game will improve greatly. He was certainly a pain in the ass during the first meeting, finishing with 20 points and getting to the free throw line 10 times. Hearn's eFG% of 55.8% is not only good enough to rank tenth in the Big Ten, but it's also a full 6.5% higher than D.J. Richardson's, who leads the Illini at 49.3%. So giving Hearn any open looks is asking for trouble.

It was easy to overlook during the win against Purdue because everything else was going so well, but Brandon Paul had an absolutely horrid game against the Boilermakers. Paul played only 22 minutes, making one of his six shots on the evening and finishing with as many assists as he did points. Which would be cool if he scored like 15 points, but he didn't. He scored only three. Which was two less than the amount of fouls he finished with.

Northwestern is not the kind of team that Paul needs to have a huge game against for the Illini to win, but it'd be nice to see Paul get it going again as we approach the Big Ten Tournament. In the last four games Brandon is shooting 30.2% from the floor and his eFG% of 37.2% isn't any better. Yes, he's averaged a respectable 11.75 points per game in that span, but if you take out the Indiana game those numbers drop to 8.7 points per game and a shooting percentage of 24.1%.

The Illini may be on their way to the tournament -- KNOCK ON WOOD -- next month, but if Brandon Paul is playing like this it won't be a long trip.

Fornelli: I know Northwestern played very well on the road against Ohio State, but I don't think it was a success that's sustainable. Even at home. This is still a team with no depth, and even if it's at home, the Wildcats just don't have enough in the tank to beat Illinois over a 40-minute stretch again. I may regret this, but not only do I think the Illini win today, but I think they do so with relative ease. Illinois 71 Northwestern 57 (6-6 on the season)

Primiano: It's been exactly one month since we lost to Northwestern. I want revenge. They have seven players right now, run them ragged. Illinois 77 Northwestern 52 (5-7 on the season)