Occasionally The Champaign Room goes Open Bar because Fornelli loves to indulge himself.

When I was a child and growing up my dad loved space. There were many nights I spent watching shows like Nova about the universe with him on television, and eventually he bought a telescope so we could look into space on our own. He'd take the telescope out in the yard and together we'd look at the moon and the stars, occasionally getting a glimpse at planets like Mars and Venus.

It was amazing to a child like myself. Space just seemed so cool, so full of endless possibilities and so serene. It was just a bunch of bodies chilling in a black sky, free of any cares or concerns.

Of course, I was a child then. I was naive. Never could I have imagined then that while I was looking through the lens of the telescope and into space that Space was looking right back down on me. Plotting against me. Just waiting for the opportunity to strike back and destroy me, my dad, my family and our telescope.

But that's exactly what space is trying to do right now.

And I can prove it.

You've no doubt heard about the meteorite in Russia earlier this week, but in case you haven't, here is some visual proof.

You probably first saw or heard about it and thought "Wow, what a wonder science is. Thank goodness nobody was seriously hurt!"

Check out this video from San Francisco, California, UNITED STATES OF AMERICA on Friday night.

You may not have cared when it was Russia, but how about now that it's the UNITED STATES OF AMERICA?

"Oh but Tom this is just a coincidence. Space isn't attacking us it's just a few meteors getting a bit too close for comfort, it doesn't mean we're under attack. Space can't attack us!"

You still think this is a coincidence? Well, how about this photo taken by satellites at 5pm STANDARD AMERICA TIME on Friday February 15. I must warn you, this image is graphic. And terrifying. 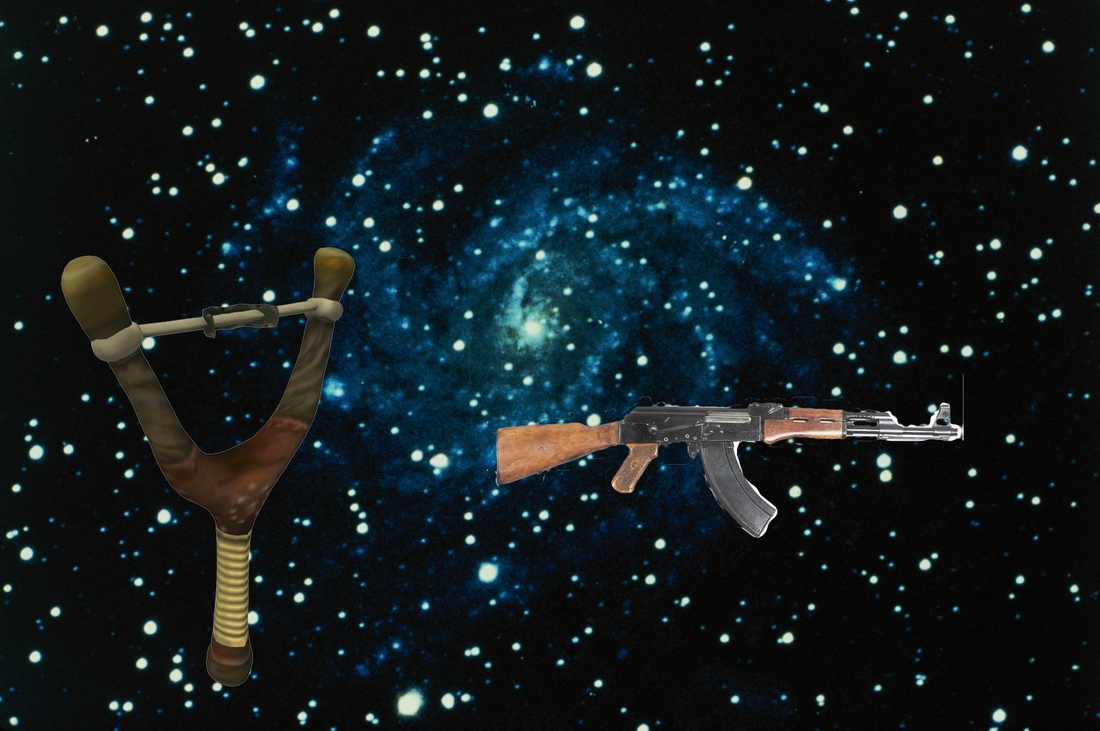 "Space can't attack us," said the idiot while Space was chilling with its AK-47 and a slingshot, slinging asteroids at it.

I know it's hard to comprehend, but Space wants you dead, and you have two choices. You can either let Space kill you, or you can stand up for your right to freedom from universal tyranny and fight back against Space. I know what I'm going to do, but I can't do it alone.

We must stand up against Space. I will not be a martyr like the dinosaur. 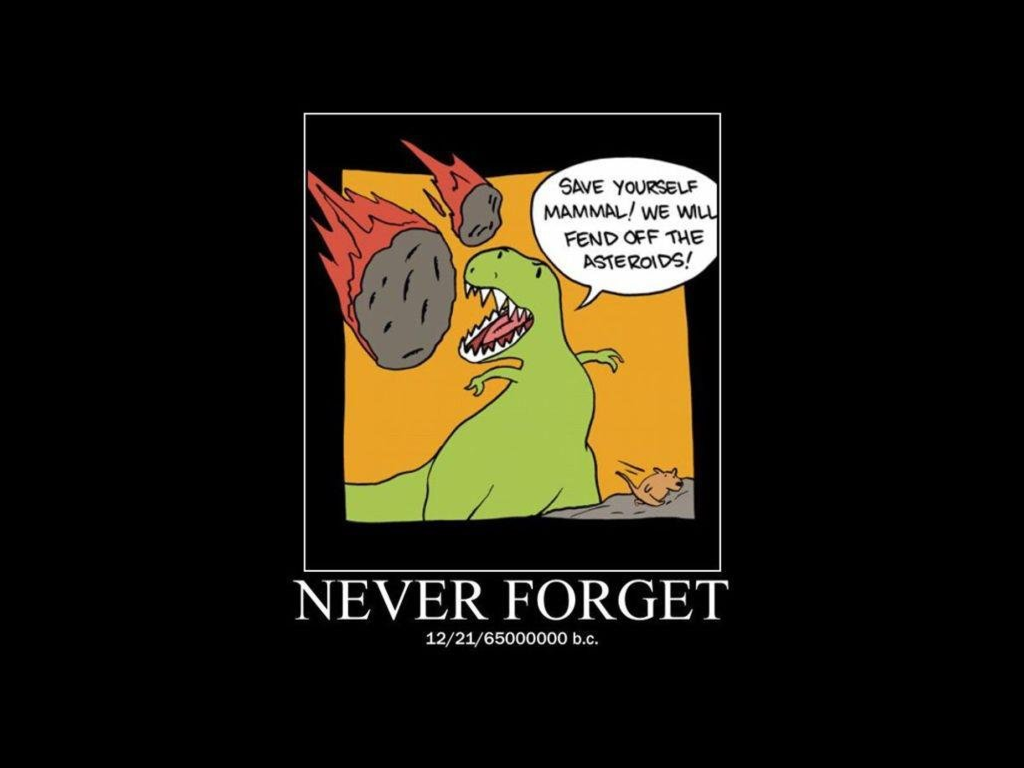 The problem is, how do we fight back against Space? Yeah, we can shoot our guns at it, maybe launch a few rockets, but Space is huge. It's also only visible at night, hidden from us during the day which is when it does its plotting. Yes, the light of the Sun that gives us all life could actually lead to our death.

And not just because it shields Space for 12 hours a day.

No, in what is the kind of shocking revelation that will surely shake the resolve of all life here on Earth, it turns out that the Sun is actually working with Space. Much like we can't see Space during the day, we can't see the Sun at night.

But satellites can, and a satellite took this photo of the Sun overnight and it looks as though this battle will be harder to win than originally thought. 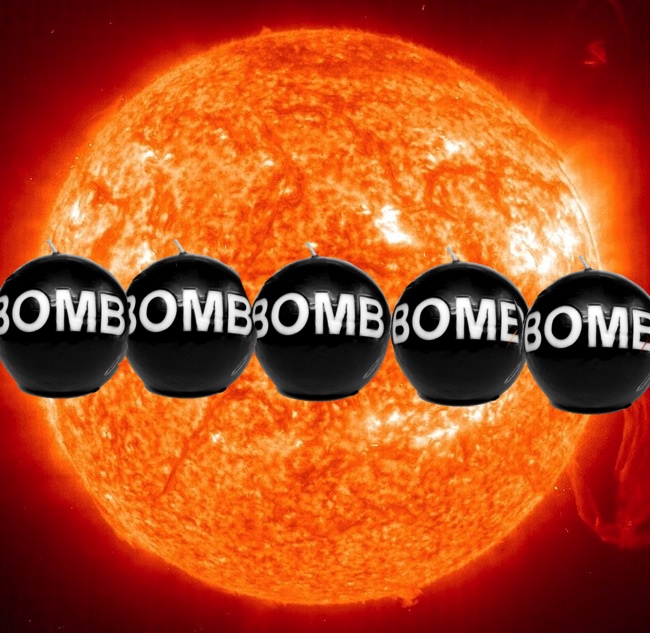 That's right. The Sun is one giant bomb, waiting to detonate and take you, your family, your dog, your iPad, your Internet and that cute girl that works at the drug store down the street with it.

The Sun is a suicide bomber. It may also be the key to victory against Space.

You see, the Sun may have been raised to blow up and destroy our way of living, but a scientific fact is that no life form truly wants to die. The natural instinct is to live as long as possible, and the Sun is no different, and this is a weakness we must exploit.

After all, Space wouldn't have recruited the Sun to blow us all to hell if Space didn't need its help.

So if we get to the Sun we can turn it. How do we do this? Well, it's simple. The Sun is pretty much just a big ball of fire, and fire has enemies. Namely water.

We have to waterboard the Sun. After hours of having water poured on it the Sun will fear for its life and back down. We can then turn the Sun and get it on our side as an ally. There's no way that Space will want to attack us if we have the Sun on our side because then the Sun would explode and create a black hole and suck all of Space into it killing Space.

Sure, we'd be dead too, but Space doesn't want us dead in exchange for its own life.

Now, this won't be easy. We are going to need to create some kind of giant pitcher spaceship and fill it with water so we can fly it to the Sun and start waterboarding it, but damn it, if we are of one mind and concentrate, we can do it.

Let's not forget, the Sun may be made of fire, but you know who invented fire? That's right, us.

And if we invented it, we can sure as shit put it out.