Don't Let Yourself Down

The Illini return home after two huge wins to begin a stretch of games against beatable opponents. Can they avoid the letdown?

Share All sharing options for: Don't Let Yourself Down

It sounds weird in my own head as I type this, and I'm sure it'll sound a bit strange to you as you read this, but in many ways today's game against Purdue is more important than either the Indiana or Minnesota games were. And not just for the revenge factor after Purdue beat the Illini in the Big Ten opener.

The Minnesota game was very important because it came after the Indiana upset and would give us all a much better indication of whether or not this team had turned a corner or just had a good game at home. Clearly, this team has turned a corner, but there's still a few blocks to walk down.

And Purdue begins a portion of the schedule that features three straight games that the Illini should win. Which is a change of pace to what we've dealt with recently. What worries me is that after beating Indiana and Minnesota this team may return home and think that Purdue won't be much of a challenge, and that kind of attitude could end in a loss and all that momentum we've built disappearing.

Yes, the Illini should beat Purdue tonight, but it's not as if Purdue has no shot. We already know Purdue is capable of beating the Illini. However, when looking back at that game to find what the problem was, nothing really stands out. Purdue out-rebounded the Illini, but it wasn't by a huge margin, and everything else was pretty even. The Illini even hit 10 three-pointers in the first meeting, but did make only 35.6% of the field goals on the night and also shot only 64.3% from the free throw line.

So I guess it was shooting? Possibly? Or was it just playing at Mackey Arena?

I don't know, all I really remember from that game was thinking that it was a bad sign.

Another loss tonight would be a worse one. 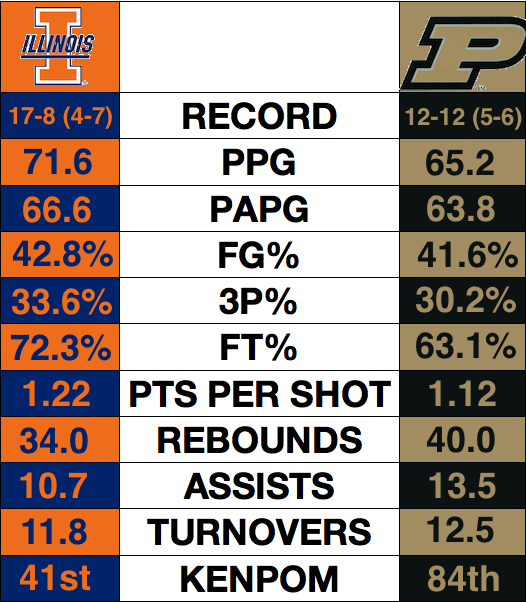 The guy who killed us in the first meeting was Terone Johnson. He finished with 25 points and 9 rebounds while shooting 50% on the evening. I don't think Terone is going to have the same kind of night tonight, not on the road. No, the guy I think we'll need to worry about more than anybody else is center A.J. Hammons. Hammons had a terrible game against Illinois as he was in foul trouble, but in his last four games he's been terrific. In those four games he's averaging 19.25 points and 9.5 rebounds per game while shooting 52% from the field. So, yeah, if he's going to continue playing like that, we're going to have a problem. Nnanna Egwu already has trouble staying out of foul trouble, and Hammons won't make it any easier on him. Don't be surprised to see the Illini treat Hammons the same way they did Trevor Mbakwe in the second half against Minnesota. Double teams, double teams and more double teams.

I already mentioned him, but that doesn't change the fact we need Nnanna Egwu to have a much better performance tonight than we've seen lately. In the Nebraska and Michigan games Nnanna had 20 rebounds, grabbing 10 in each game. However, in the last four games he's averaging only 7.5 points and 3.5 rebounds per game. Take out the Wisconsin game where he had 14 points and 7 rebounds and those averages drop to 5.3 and 3 respectively. And Nnanna fouled out in three straight games before only picking up 2 fouls against Minnesota. The Illini don't need Egwu to have a huge game in order to beat Purdue, but they do need him to stay on the court and slow down Hammons. If he can hit some shots on offense to space the floor and bring Hammons out from under the basket, all the better.

Fornelli: Purdue is a good rebounding team and that always concerns me when it comes to the Illini, but Illinois is still the better team. I wouldn't be surprised if we get off to another slow start tonight, but I think we'll more than make up for it and having this game at home will help too. Illinois 70 Purdue 59 (5-6 on the season)

Primiano: This is not last year's team. I don't know how many times I will have to keep telling myself that fact to make it stick. Last week's big wins have restored my faith and confidence in Groce's boys. Yeah, we already lost once to this Purdue team and they traditionally have our number, but this is not a good team. In fact, it's the worst Purdue squad I can remember. Expect January's mishap to be rectified. Illinois 72 Purdue 60 (4-7 on the season)