The win against Indiana was fantastic, but it's in the rearview mirror now. How the Illini handle the games after that win will determine whether or not the Indiana win actually means anything.

I wish that the Illini had a week off following the win over Indiana. Not because I think it would be good for the team or anything, but only because I'd like some more time to enjoy the win before moving on to new business. And today that is what the Illini do, traveling north to Minneapolis to take on the Gophers in The Barn.

While the win over Indiana was wonderful and could very well serve as the highlight of the season -- and maybe the careers of our senior class -- it won't mean much of anything if the Illini come out and lay an egg today or for the rest of the season. Getting the victory over the Hoosiers was a huge step forward, but there are more steps to take if the Illini want to get to the dance.

Unfortunately winning on the road against Minnesota is not easy. The Barn is not kind to visitors, as the Gophers have only lost once at home this season, and that was an 8-point loss to Michigan.

This is also the same team that came into the Assembly Hall a month ago and beat the Illini by 17 points. Strangely enough, it was a game that sent both teams into a funk.

We all know the Minnesota loss was the first loss in a run that's seen the Illini go 2-6 in their last eight games, but Minnesota fell apart a bit afterward as well. That win improved Minnesota to 15-1 and 3-0 in the Big Ten at the time. The Gophers are now 17-6 and 5-5 in the conference. They had a four-game losing streak that featured a loss against Northwestern and was only snapped by home games against Nebraska and Iowa.

So this is a Minnesota team that's not playing nearly as well as it was in the first meeting.

Hopefully that's something the Illini can take advantage of, but it won't be easy to do. The defensive effort we saw against Indiana will have to continue tonight, and this Minnesota team does turn the ball over more frequently than anybody else in the Big Ten with its 21.7% turnover rate. However, they make up for this by being the best offensive rebounding team in the country -- an offensive rebound rate of 46.3% -- and giving themselves plenty of second chances.

So if the Illini can force some turnovers, limit Minnesota on the glass and make shots -- let's not forget that! -- then they have a realistic chance of winning this game today. Just as realistic as beating Indiana on Thursday night, anyway. 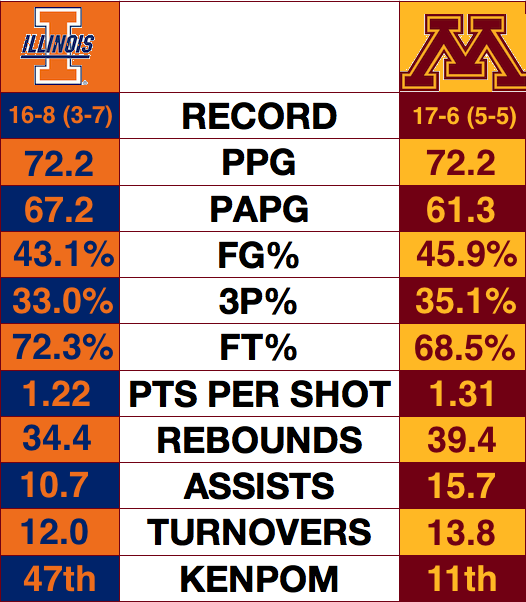 In the first meeting the Illini were killed by Trevor Mbakwe. Yes, Joe Coleman and Andre Hollins had big games offensively and shot the lights out, but Mbakwe was the heart of the problem. Sure, he was eviscerated by Brandon Paul, and that was fun, but he also finished with 19 points and 11 rebounds. I mentioned that Minnesota is the best offensive rebounding team in the country, and Mbakwe is their best offensive rebounder. In fact, he's the best in the Big Ten. If Illinois is going to beat Minnesota in The Barn it can't give the Gophers second chances. So the less impact Mbakwe has on this game, the better off the Illini are.

I could go with Nnanna Egwu here considering how important he'll be against Mbakwe, but instead I'll go with Brandon Paul. Again. For the millionth time. I do think that the Illini can play defense for 40 minutes -- the fact it paid off so big on Thursday will only make them try harder -- and we can limit Minnesota on the glass, but none of it's going to mean anything if we don't score points. Winning on the road is very hard in this conference, but it's a lot easier when Brandon Paul is hitting shots.

Fornelli: I might be seen as a bit of a party-pooper here coming off the Indiana win, but as much as I want to pick the Illini to win today, I can't do it. The win over Indiana was great, but we trailed the majority of that game before finally playing well in the closing minutes. While it was nice to see, a few minutes does not change my opinion of this team overall. It's a tight game, tonight, but Minnesota pulls it out. Minnesota 73 Illinois 67 (5-5 on the season)