Illinois vs. Indiana Preview: Beware the Seven Seconds or Less

These Candy Stripes can run.

Share All sharing options for: Illinois vs. Indiana Preview: Beware the Seven Seconds or Less

Many teams and coaches claim to operate an "uptempo" offense, only to renege on those ideals at the risky proposition of playing at that speed. At an uptempo pace, turnovers are abundant, bad shot selection is aplenty, and your defense oftentimes doesn't arrange properly on the other end when the opposing team decides to ratchet up its pace.

Uptempo is one of those airy media words that really lacks any conviction now (it has good company with upside, streaky, and impact). Our own fearless leader touts an uptempo offense but hasn't had the personnel nor the recruiting luck to snare the players capable of wielding that offense.

I preface the preview with all of this because Indiana is one of the few teams in the country that makes good on its uptempo promise.

And let me go on record saying it: Damn, it's fast. I can't muster many compliments for those candy-striped folks to the east, but it's exhausting just to watch them play.

Of the teams in the top 50 of Ken Pomeroy's rankings, Indiana plays at the fastest tempo, ranking 11th nationally in pace. For comparison's sake, we're positively sluggish coming in at 325th in the nation.

Indiana's speed springs fully formed from the hands of its point guard, Yogi Ferrell. Yogi's performed like a First-Team All-Big Ten candidate thus far, and he passes the eye test with his dazzling speed. Indiana head coach essentially has given him the green light to initiate offense as fast as he sees fit, and Yogi obliges.

In its last game against admittedly woeful Kennesaw St., Indiana stepped on the gas early. The below screen shot starts off as an Indiana breakaway off a long rebound from a Kennesaw 3-point attempt. Kennesaw actually gets back on defense before Yogi, but none of them are in any position to stay with him as he reaches peak speed. 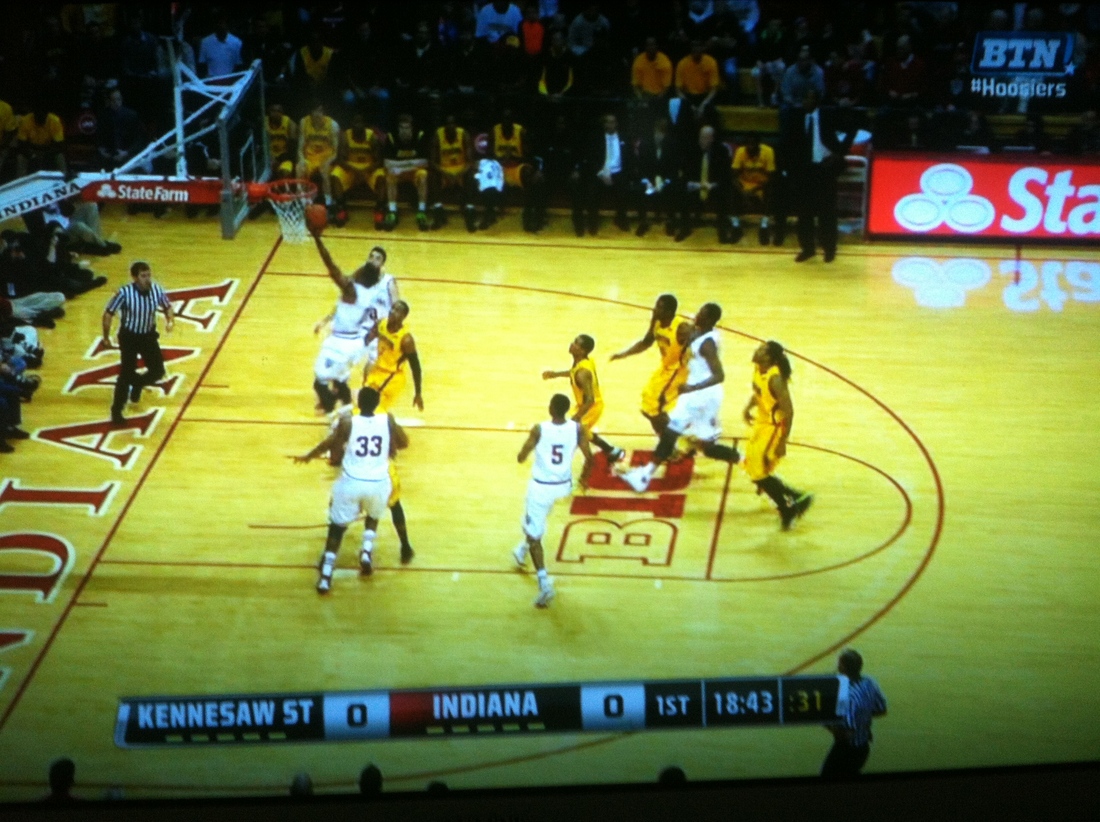 As the scoreboard at the bottom of the screen shot indicates, Yogi is at the rim for an uncontested layup with 31 seconds left on the shot clock. Those Kennesaw dudes look like they've seen a ghost. If Yogi sees a defense on its heels, he's goin' rim-hunting

That one showcases Yogi's ability, but this next screen shot nearly made me roll off the couch. The primer for this image: it followed a Kennesaw score where Yogi received the inbound pass around the opposite free throw line. 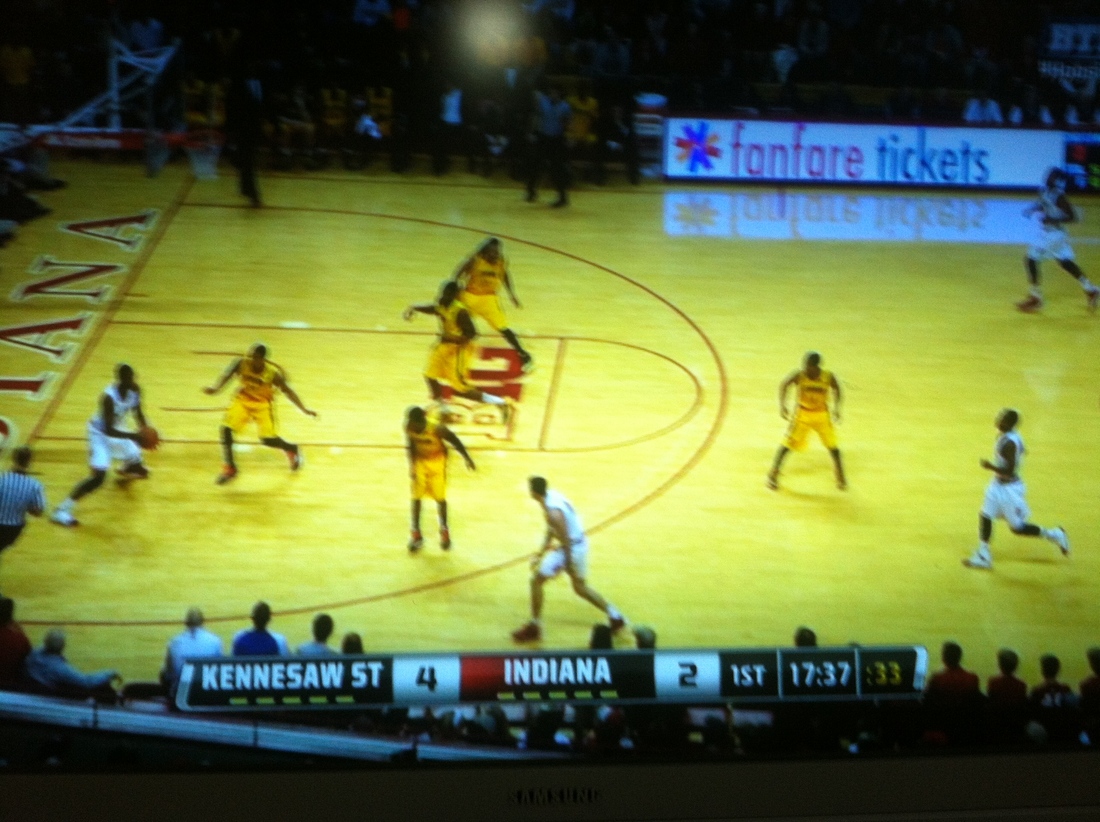 With 33 seconds left on the shot clock, Noah Vonleh receives a pass within 10 feet of the basket and a clear path to the hoop. Note: most of Kennesaw's defense is in the half-court already, which in no way deterred the Hoosiers from firing that pass to Vonleh.

This is how Indiana attacks. For all of Crean's deficiencies and stubbornness, he knows that he can get a defense tired and panicked by a quick-strike threat like Yogi. He's leveraging the loss of skilled veterans from last year's team by keeping the ball in the hands of his uber-quick, efficient and creative point guard while rangy wings make cuts to the hoop.

Despite my mild compliment of the man, I won't let him totally off the hook. For all its blinding speed, the offense isn't particularly good. KenPom has Indiana's offense ranked 121st, sliding in five spots behind ours at 116 (another reason I love Groce: he speaks of wanting to run a faster offense, but he knows this team is better suited for the halfcourt. Adjusting toward your assets is smart.)

Crean uses a roster that goes nine-to-ten men deep, keeping his players fresh for its offensive barrages. On the wings, most of the production comes from Will Sheehey and Jeremy Hollowell with Evan Gordon off the bench. That's Eric Gordon's little brother, mind you. Sheehey and Hollowell shoot 25 and 26 percent from 3-point range, respectively, but both execute excellent cuts in open space when Yogi draws defenders his way.

The scary wildcard here is Indiana's freshman big man Vonleh. He shows improvement with each game, and he's an ideal pair with Yogi's quick-hit passes and gathering Indiana's 3-point misses. Vonleh enters the game leading the Big Ten in rebounding at 9.6 per game, a rare feat for a freshman whose only company in that category since 1990 includes Chris Webber, Kris Humphries and Greg Oden.

Tuesday's game at the State Farm Center will feature a style vs. style battle that Illinois will attempt to funnel into the half-court. Tracy Abrams and Kendrick Nunn will take turns guarding Yogi, a task that will require them to make him work to find the open spaces on the court that he enjoys.

Illinois can really give itself an edge in the turnover battle. Indiana coughed it up 20 times against Nicholls St. this season, and 11 times in the first half against Kennesaw. If Indiana wants to unleash its uptempo offense on Illinois, it's going to have to be cleaner than most of its performances in the non-conference season.