Last season was John Groce's first year with the Illini, but this season is his first team.

Tonight is the night that I know many of you have been waiting for. No more exhibition games against schools you haven't heard of, tonight the Illini start playing teams you have kind of heard of but don't know anything about, and the results actually count this time.

However, unlike most basketball seasons, I come in to this season not really knowing what we're going to see. The only players on the roster tonight who saw time on the court in an Illini uniform last season are Tracy Abrams, Nnanna Egwu, Joseph Bertrand and Mike LaTulip. And all of them will be in new roles this season.

There are just so many questions we don't know the answer to, but they'll start being answered tonight.

While Abrams, Egwu and Bertrand all have plenty of experience, none of them have ever had the kind of responsibility they'll face this season. Last year Abrams ran the offense from the point, but this year he'll be looked to as a scorer more than just a facilitator. The same can be said of Egwu, who has always been important to this team, but like Abrams, wasn't relied upon as much with Brandon Paul ,D.J. Richardson and Tyler Griffey around as he will be this season without them.

Also, can Joseph Bertrand make the transition from first guy off the bench to starter? He has always been a great energy guy off the bench who is capable of taking a game over for stretches of time, but this year his production will be more important than his energy. 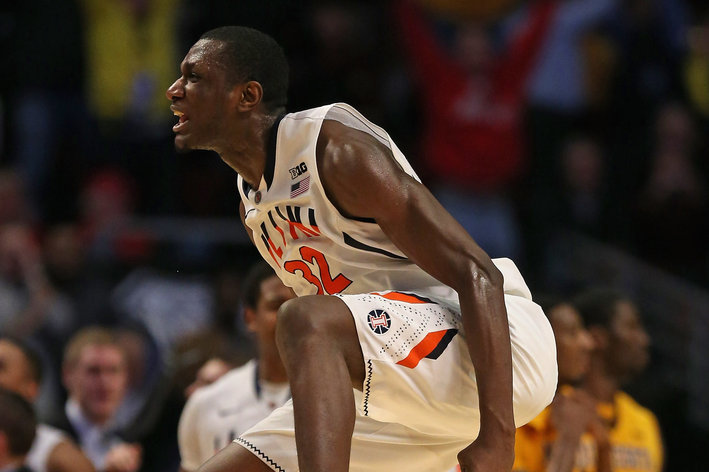 Will Leitch is back at TCR, and he's ranking Illini players

Then there's Rayvonte Rice, whom we've heard plenty about, and some of us remember him from his time at Drake or even in high school. But none of us know how things will work out in that Illini uniform. I tend to think he's going to be one of the keys to the team this season, especially without Ahmad Starks available. Rice may end up proving to be the go-to guy when we need points, whether it's by getting to the free throw line -- which he is really good at by the way -- or his three point shooting -- which he hasn't been good at in his career, but has supposedly worked on for the last year.

Personally, I don't have very high expectations for this team this season, but this doesn't mean it won't be an interesting season. We're a very young team, as Bertrand and Jon Ekey are our only seniors, and Ekey hasn't even played a regular season game for the Illini yet.

It's a season in which we're not only young, but we're going to have to rely on that youth just about the entire season. Now, this approach could work out wonderfully next season, but odds are that this year it's going to be a bumpy ride. I'm as high on Groce's 2013 recruiting class as anybody, but there's a difference in thinking these guys have potential to be good players and expecting them to be right away.

Particularly with the load we'll be putting on them.

Guys like Kendrick Nunn, Malcolm Hill, Jaylon Tate, Maverick Morgan and Austin Colbert -- whose name I never pronounce correctly in my head thanks to Stephen Colbert -- are all going to be relied upon this season, and sometimes in key situations.

Which is why these first 13 games of the season are going to be so important. Not so much from a results standpoint, because I don't expect the Illini to get off to a 13-1 start in non-conference play again this season, and you shouldn't either. No, these first 13 games will be important more for getting the feet of the freshmen wet in order to help prepare them for the gauntlet that will be Big Ten play.

The Big Ten is not a conference in which you want to rely on unproven players.

Still, even if all of these things work out, and a couple of the freshmen prove to be reliable players to bring in off the bench, I still have serious questions about where the offense is going to come from. The three-pointer is just so damn important in the college game, and I don't know where exactly it's going to come from on this roster.

Of our returning players, Joe Bertrand had the best three-point shooting season last year, and he finished at 32.1%. Tracy Abrams shot 27.2%. In his two seasons at Drake Ray Rice shot 27% from deep. Jon Ekey may prove to be our best threat from deep, as he shot 36.5% from three at Illinois State, including 40.7% in 2011-12. However, he can't do it alone.

While I think Kendrick Nunn is a good shooter, once again, he's a freshman. I'm not going to count on him to be a consistent shooter night in and night out just yet.

So when I see this team right now, I see a team that isn't a good shooting team from the outside, and I see a team without a true post threat. Nnanna Egwu has shown flashes, and he's certainly bulked up this season, but it remains to be seen if he can be the kind of guy the Illini can get the ball in to on possessions for some points in the paint.

And if Nnanna gets in foul trouble? Well, I'm not expecting Morgan or Colbert to just come in to provide that kind of offense. Not in the Big Ten.

Now, I know that a lot of this might seem a bit negative, but it doesn't mean I don't believe this team could surprise us this season. Hell, last year I was just hoping the Illini could find a way to sneak into the NCAA Tournament, and they damn near reached the Sweet 16. I didn't expect that 13-1 start with a win on the road against Gonzaga, or that win against Indiana either, but they happened.

However, I see this season being another year in which we're going to have to live for certain moments, rather than sustained success. And while the optimist in me sees everybody having the best years of their career while the freshmen step right in and contribute, the realist in me expects to see a lot of struggle with some flashes of brilliance mixed in.

The optimist in me sees another tournament berth, while the realist in me is preparing to watch the NIT this season.

This is going to be a transitional year, and one we shouldn't have high expectations for. But just because I'm not expecting a Sweet 16 run this season doesn't mean I'm not thrilled this season is finally here.

I look forward to the transition.