Behind Enemy Lines: A Q&A With The Crimson Quarry

This week we are joined by Adam Johnson from The Crimson Quarry.

Share All sharing options for: Behind Enemy Lines: A Q&A With The Crimson Quarry

You know the drill. We are playing Indiana so I asked a Hooisers blogger some questions. This week it's Adam Johnson, manager of The Crimson Quarry. Let's do it.

1. Indiana now stands at 3-5 after losing to Minnesota. With Ohio State and Wisconsin still on the schedule is a bowl game now out of the question?

Likely. A lot of Big Ten types have been pointing to the Indiana/Ohio State game as the one game that OSU seems to have every year where a team that has no business threatening to beat them either wins or takes it to the wire. But yeah, I wouldn't bet on it. The Hoosiers had a pretty good opportunity to make a bowl game without doing anything special other than winning at home and they've blown that.

2. I really think Kevin Wilson is doing a great job? How do Indiana fans feel about him? Is the program on the right track?

Kevin Wilson is doing a very good job. Indiana fans are split on him though. The defense is ultimately still his responsibility and it's been very poor. Add in the fact that for some reason Indiana fans immediately knee-jerk in every heartbreaker that we need to fire the coach and he's not sitting as pretty as many outside of the program think. Of course a coaching carousel could be a very good explanation for why we've been as terrible as we have. Kevin Wilson is still the man for the job and he's got us going in the right direction. Just gotta fix that defense.

3. We Illini fans often talk about what is the realistic expectation of where Illinois can be as a football program. What would you say is the ceiling for Indiana?

Due to history of disappointment, I keep my ceiling for Indiana pretty low. With the talent in the region and the facilities the program has, I think Indiana could be a Michigan State type program if they ever build a full head of steam. Michigan State is a program that I wouldn't consider a powerhouse and they certainly have their down years, but a couple times a decade or so they can compete as a top 25 program and a Big Ten Championship. I would be ecstatic if Indiana could be that.

4. Indiana's defense is a hot mess. It is scheme, a lack of talent, both or is there something much deeper?

Yes. I'm one of the guys that was looking glass half full most of the year when it came to coaching. I'm not certain how many times I've watched guys in position to make a play only to whiff. So I argued over and over that this isn't a coaching problem, it's a youth and talent one still. Help is on the way but they're all true freshman, they need time. Unfortunately, Kevin Wilson is going to have to fire DC Doug Mallory in the off-season to get the fans off his back.

5. Which players should we watch out for on offense? Defense, or should I even ask that?

On offense? All of them. But specifically Ted Bolser and Cody Latimer. Both guys are near the top of the conference at their position. Bolser won't get you on home run plays but he's always good for about 15 yards per target. Latimer, will burn you and he'll do it over and over again if you let him. He'll be playing on Sundays in the near future. On defense watch out for true freshman linebacker TJ Simmons. He blows plays here or there, but he flies around the field making a ton of tackles. He's a big kid that moves well and can hit hard. He's just fun to watch. 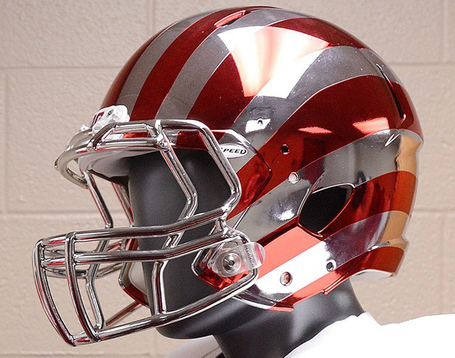 Those helmets, live, are AWESOME. Seriously, I'm not certain if you've seen them on the head of an actual player, but they look pretty darn good. When IU played Missouri in the Crimson and Chrome and Missouri was playing in their black matte and chrome tiger helmets, it may have been the best combination of helmets in a single game that has been played this year.

7. What is your prediction for the game?

Hell, I don't know. 10 points is the spread. That sounds right, but with this defense we're such a wildcard. If they play competently like they did against Penn State, I could see IU blowing Illinois out of the water. But you know and I know that isn't going to happen. Still, give me at least 42 points for the Hoosiers. I'll say Indiana 45 - Illinois 38.

Thanks again to Adam for answering our questions.