It doesn't actually mean anything, but it's a pretty good sign.

If you weren't paying attention last night, there were some pretty significant swings in Illinois' favor as far as Cliff Alexander is concerned. First there was the news that the in-home visit with Kansas that Cliff had announced earlier this week was no longer on.

Though that doesn't mean Alexander won't be going to Lawrence this weekend, as that's still a go for now, which means Bill Self and the Jayhawks are still going to get a chance to make their final pitch before Cliff makes his decision a week from tomorrow.

Still, just in case that news wasn't good enough for Illinois fans, there was also this from 247Sports.com's Jerry Meyer.

Too much info to ignore. Changed #Crystalball pick for Cliff Alexander (#3/#3) from Kansas to Illinois. http://t.co/OmSREBFQeQ

Now, before we get too far into this, let's remember that while it's a fun feature, 247's Crystal Ball doesn't actually mean anything. The majority of people making their picks on that don't really know any more about a player's recruitment than you or I do. However, a guy like Meyer, isn't going to change his pick from Kansas to Illinois unless he feels he's got a good reason to.

There's a reason Meyer -- 247's directory of basketball scouting -- has the highest score among all of the site's Crystal Ball predictors. He's generally more tuned in to what's going on than anybody else over there. Also, Meyer switching his pick to Illinois means there will be a lot more people following suit just because he switched.

Still, even before Meyer's switch, you'll notice that there's a lot more "momentum" on Illinois' side of things right now. Here are the last 14 predictions in Alexander's Crystal Ball. 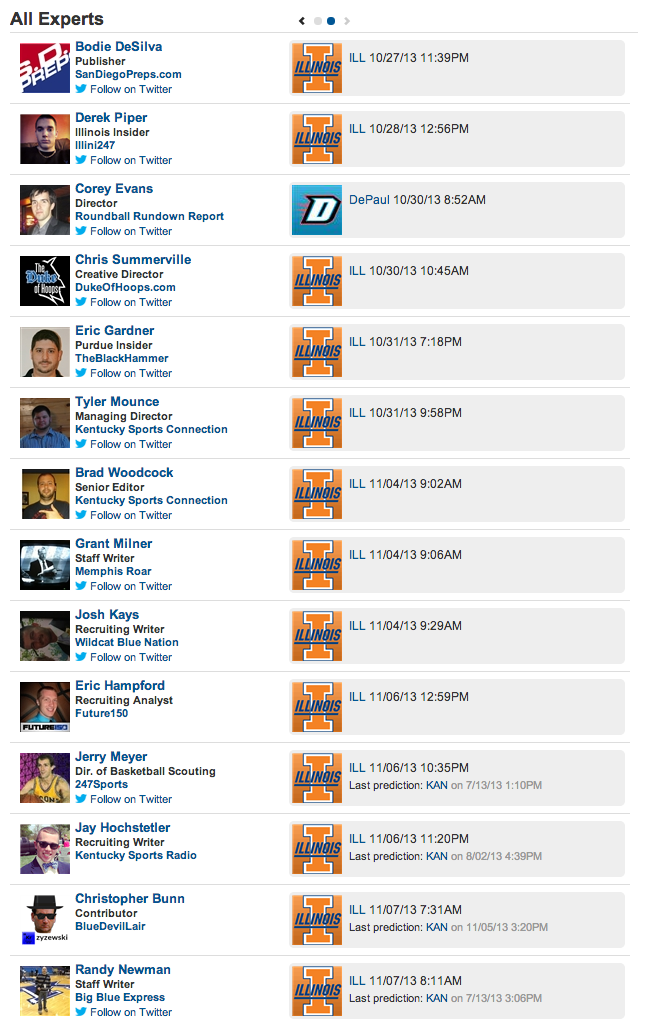 You'll notice the lack of Kansas.

And while I said that the Crystal Ball isn't necessarily proof of anything, let's not forget that what's happening on Cliff's Crystal Ball is the same thing that happened with both Leron Black and Quentin Snider before they committed to Illinois.

Now, while I find all of this promising, the next prediction I'm waiting to see change is that of my colleague over at CBSSports.com, Jeff Borzello. I'm happy to see all those Illinois predictions on the page right now, but if both Meyer and Borzello are suddenly saying Alexander is going to choose Illinois, well, that's when I'll start to truly believe it's happening.

As for now I'm just preparing myself for what's going to be a very long week of waiting.