Grab the leftover turkey and watch some Illini basketball.

Share All sharing options for: GameThread: Illinois vs. IPFW

Good news, everybody. While tonight's game against the Mastadons is only available on ESPN3, after tonight the Illini will only have one untelevised game left to play. That will be against Dartmouth on December 10.

As for tonight's game, this should be a win for our Illini, but we shouldn't take this IPFW team for granted either. I'm not going to sit here and tell you this is a good team or anything, but it did give a good Dayton team a scare in the season-opener.

Overall it's a decent shooting team that could be very dangerous should it get hot from three, and it's also proven to be a decent rebounding team so far, though I'm not sure that will be a huge problem tonight. However, while they don't have a ton of size, you'll see a giant on the court in Steve Forbes.

No, not that Steve Forbes. This is a different Steve Forbes that checks in at 6'9 and 320 pounds. He could cause some problems for us in the paint.

Still, all that being said, barring some kind of total disaster, we should win this one rather comfortably. 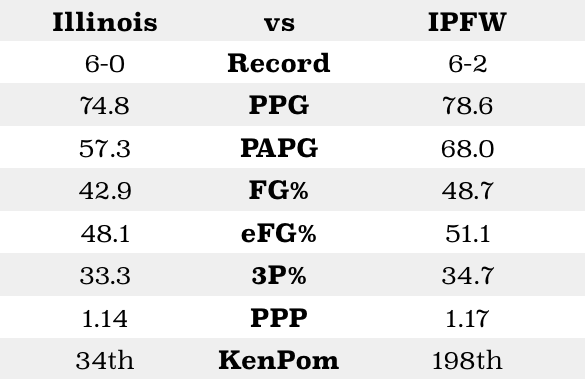 How many points will Ray Rice score tonight?