The Day After: Fifth Place Champs

The Day After enters uncharted territory.

Share All sharing options for: The Day After: Fifth Place Champs

How do I do this? How do I respond to the Illini winning their first Big Ten game in two years, and their first since The Champaign Room came into existence? It's just so....it's so....strange?

Yeah, you know what? I am. I don't care that the Illini barely managed to beat a Purdue team whose lone win this season was a 20-14 -- hey, look at that score! -- win over an Indiana State team that just finished its season with a 1-11 record on Saturday. I don't care that they didn't blow a bad Boilermakers team out, or that the offense made plenty of mistakes. 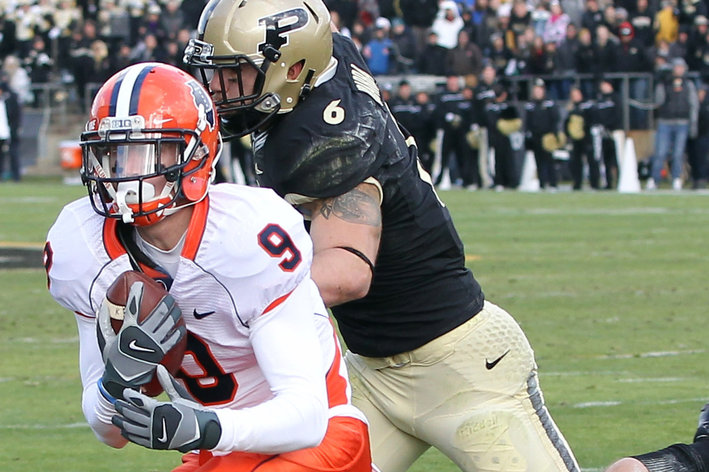 I don't care that this win probably doesn't mean anything about the long run of this program, nor do I care that all it does is guarantee us fifth place in the Leaders Division.

They ended a 20-game Big Ten losing streak in the process. I don't care how it looked or what it means, I just care that it happened. And I want to be happy about it.

Sure, it was close, but you know what? The only reason it was close was because we let it be. Early in the game I thought we were going to be in for a three-hour nightmare. Before you even settled in to your seat to watch the game there was Purdue running back Akeem Hunt breaking free for a 62-yard touchdown run to put the Boilermakers up 7-0.

And suddenly you feared that even a team that was averaging only 2.9 yards per carry this season was going to run wild over the Illini.

But you know what happened after that Hunt touchdown? Well, Purdue would score another touchdown, but after finding the end zone twice and amassing 150 yards of offense on their first two drives, the Purdue offense would manage 133 yards of offense and no points on its final 10 drives of the day, two of which started inside the Illinois 30-yard line.

And you know what that means? That means that a defense that we've been disappointed in all season long won this game for us on Saturday. A defense that has been one of the worst in the country for two seasons now is what finally stood up and put an end to the losing streak.

Had the offense not turned the ball over four times -- twice deep in our own territory, and once in the red zone -- the Illini would have won this game with ease thanks to the performance of the defense. The Illini held Purdue to 4.8 yards per play on the day, but that number drops to 3.7 yards per play without Hunt's touchdown run.

The only way the defense could have played any better is if Steve Hull was still playing safety as well, because we all know that Steve Hull is the greatest football player to ever football, and that he should win the Heisman Trophy but those who vote on such things believe that Steve Hull already has it all and it's only fair to let some other scrub feel good about himself once in a while.

Seriously, how about that Steve Hull?

Hull didn't have a single catch during the loss to Michigan State that cost us Ryan Lankford for the rest of the season. After yesterday he's now caught 33 passes for 557 yards and five touchdowns in the last four games. He almost added a touchdown pass to those totals yesterday, but Nathan Scheelhaase doesn't have Steve Hull's hands.

Anyway, if you take Hull's stats over the last four games and average them out over the course of an entire 12-game season he's finishing the year with 99 receptions for 1,671 yards and 15 touchdowns. Those are All-American numbers, man.

And we had this guy at safety for three years....three years...thanks Ron Zoo.....NO, I'M ONLY THINKING HAPPY THOUGHTS TODAY.

Steve Hull is one Steve Hull-like day against Northwestern away from finishing the season with over 1,000 yards receiving.

And speaking of players with 1,000 yards, after rushing for 115 yards and catching four passes for 11 yards against Purdue, Josh Ferguson is now up to 1,178 total yards and nine total touchdowns on the year. It's amazing he wasn't at cornerback last season.

Imagine if I told you at the beginning of the season that we'd be in this position, you'd be thrilled. So for now I'm willing to look over all the problems and just enjoy the fact that we are in this position right now.

There's only one game left to go this season. We can talk about the problems again after it's over.