Just what we need to wash the football taste out of our mouths.

Share All sharing options for: GameThread: Illinois vs. Jacksonville State

We've got a GameThread for the third straight day, and what's even better than three straight days with games is the fact that two of the games were basketball. Because, man, do we need basketball right now. We can't even beat Indiana in football anymore.

But basketball? Oh you're damn right we can beat Indiana in basketball.

However, today we won't be facing Indiana, but rather the Jacksonville State Gamecocks. They should not be difficult to beat because they seem to believe Jacksonville is a state and not a city. So they'll probably believe the Orange Krush when they start counting down the shot clock too. 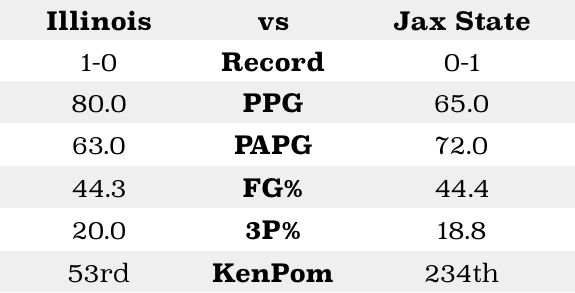 Join us in the comments below.

How many points will the Illini score today?