The Day After: There's A Lot Of Work Left To Do

While you shouldn't have expected the Illini to win on Saturday, the manner in which they lost showed just how much work Tim Beckman and his staff have left to do.

Share All sharing options for: The Day After: There's A Lot Of Work Left To Do

As I wrote in the game recap yesterday, this loss was a reality check for the Illini and for Illini fans. The 3-1 start was great, but there's just been too much talk about whether or not the Illini can get to a bowl game instead of just hoping this team can win its first Big Ten game in two years.

And even that 3-1 start doesn't look nearly as impressive this morning as it did on Friday, does it?

The Illini narrowly escaped Southern Illinois to open the season, and then pulled away from Cincinnati late to make that win look more impressive than it probably was. Since that Cincinnati win the Bearcats have won two of three, but those two wins were against Northwestern State and a 14-0 win over a Miami (Ohio) team that we know firsthand is terrible.

On Saturday the Bearcats lost to a South Florida team that had been 0-4 and lost those games by an average score of 38-14. And they weren't playing powerhouses, either. Those losses came to McNeese State, Michigan State, FAU and Miami.

And while losing to Washington by only 10 points still looks very good after Washington nearly knocked of Stanford last night, let's not forget that the Huskies out-gained the Illini 615 yards to 327 in that game.

We all spent too much time looking at the 3-1 part of our season and ignoring everything that was there on the periphery if we chose to look at it.

Well, we can no longer ignore that stuff. Nebraska made sure of that on Saturday.

Just like we saw against Washington and Bishop Sankey we saw Illini defenders being swallowed up by Nebraska's offensive line on Saturday and Ameer Abdullah running by everybody, breaking weak tackle attempts and dancing all over the field to the tune of 225 yards and two touchdowns. And if those numbers weren't impressive enough, Abdullah averaged 11.3 yards per carry.

That's a damn first down every time they handed him the ball. And while they don't keep track of the statistic, I'm pretty sure he averaged two broken tackles per run as well.

As a team Nebraska rushed for 335 yards and 6.7 yards per carry.

And while Nebraska didn't throw the ball much -- as we just went over, it didn't need to -- when it did pass it found the Illini secondary all too willing to leave its receivers open.

Amazing catch, right? And everybody is focusing on Bell's actual catch, and for good reason. That's hard to do. But you know what I notice more than anything about that catch? 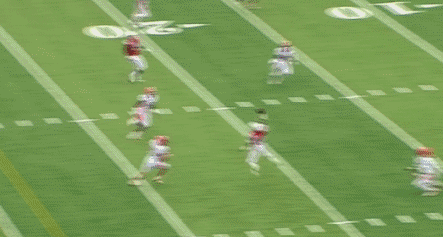 There are four Illini defenders around Bell yet there is literally not a single one within five yards of him. How does a man get that wide open in the midst of so many defenders?

I know that a lot of you blame Tim Banks for all of this, and I certainly get the sentiment considering how poorly this defense has performed the last two seasons. But, to be honest, I just can't sit here and tell you that Banks is the problem as much as the level of talent and youth he has to work with. Is it possible that there's a defensive coordinator out there that could come in and get better results with this unit? I guess. But do you know who it is?

But that's enough talk about the defense. We've known this defense isn't good and that the Illini are going to need to outscore teams to win. And with the way the Illini offense played against Nebraska, well, that's what's going to happen if the offense doesn't perform.

Though I'm not sure it's just Nate that's the problem here. In those two games the Illinois offensive line also had to deal with the two best front sevens it has seen this season, and it struggled. Particularly in pass protection.

The Illini were actually able to run the ball pretty well yesterday. If you take out sack yardage they ran for 211 yards on 45 carries, which isn't great, but they were able to move the ball on the ground. Particularly Josh Ferguson who continues to be a shining beacon of hope for this offense, but we'll talk more about him later.

The Illini offensive line wasn't opening monster holes for the running backs, but it was getting some push off the ball on run plays. However, in pass protection, they had a hard time maintaining position at the point of attack while blocking. Too often they were getting beat or pushed back, and when Nebraska blitzed they had absolutely no chance.

And don't for one second think that Big Ten opponents won't see that on film. If there's one thing I learned yesterday it's that Nathan Scheelhaase and the offensive line are going to be seeing a lot of blitzes for the rest of the year, and until they learn how to beat them, they aren't going to stop.

And Nate has a really hard time beating the blitz. I think it's a combination of recognition and decision making. If he did a better job of recognizing the blitz before the snap he'd be able to counter with his checkdown options before the ball is snapped. I mean, the Illini only gave up three sacks yesterday, but there were far more passes in which Nate was disrupted in the pocket, started dancing and then tried to take off to late. A few times he was able to get to the line of scrimmage or just beyond it, which negated the sack, but there were also yards left on the field each play, so they felt like losses.

One thing that confused me yesterday -- and it could have just been great Nebraska coverage, I've only watched the game once -- was the lack of tight end use in the offense. We don't have great receivers, and they're going to struggle getting open consistently. However, as we've seen this season, we have a group of tight ends that can cause matchup problems for just about anybody on this roster.

So where were they yesterday?

Jon Davis had three catches and Matt LaCosse had one. We used a whole lot of multiple tight end power sets -- which I love, by the way -- yet the play-action was never really used. I don't know if it was fear of the windy conditions, fear of Illini pass blocking, or a combination of all these things, but I was very surprised to see a lack of play-action passes to tight ends down the seams.

I just felt like it was there all day, but Bill Cubit and the offense didn't want to go to it.

Now, for the sake of my sanity, I'm going to talk about Josh Ferguson.

I love you, Josh Ferguson. You are the greatest talent on this offense right now. The fact you were able to have the game you did against Nebraska yesterday has convinced me that we've been seeing the real Josh Ferguson all season, not just a good player taking advantage of bad competition. I just wish the rest of the offense could have performed to your level.

There, now that we got that reason to be optimistic out of the way, it's time to get back to reality.

This team is better than last year's team. We know that because it's performed far better at times and it has already won more games. However, being better doesn't mean this team is good, and I have a feeling that road games are going to be a huge challenge for this unit. Which means those "winnable" games on the road against Purdue and Indiana -- and oh man that Indiana game doesn't look so winnable anymore does it? -- might not be as winnable as we thought.

Which means that if you think this team has three more wins in it you're just not really paying attention to what's happening on the field.

I'm not saying we should give up on this season or anything, so please don't take it this way. There's a lot of games left to be played, and anything can happen. What I'm saying is that if this team is going to get to a bowl game this year there is a lot of work left to be done on both sides of the ball.