The Day After: The Solution Isn't That Easy

After an embarrassing loss on Saturday the calls for Tim Beckman's head have begun again, but it's just not that simple.

Share All sharing options for: The Day After: The Solution Isn't That Easy

I don't even want to talk about yesterday's game. You saw it, and even if you didn't see it, the 42-3 score tells you almost all of what you need to know. Instead I'd like to talk more about the reaction I've seen and heard from Illinois fans everywhere following the loss. And that reaction is that Tim Beckman needs to go.

If only it were that simple.

I wish fixing this football program required nothing more than replacing Tim Beckman, because if it was that easy, I'd be all for it. The truth is that I'm not all that confident that Beckman is the guy who is going to turn this program around, but I don't know that he isn't, either.

There are so many things you need to consider when it comes to firing Beckman that aren't just BECKMAN IS TERRIBLE AND HE HAS TO GO. Don't get me wrong, I get the visceral reaction. I have many of the same reactions, but that's why I call this column The Day After. I like to let things sit for a while before I just get on here ranting and raving.

And after thinking about it, I've concluded that firing Beckman probably doesn't fix anything. I know Saturday's loss was terrible, and for the first time this season it looked like we were watching last year's team. It was as if the life got sucked out of the team as that interception went through Jaylen Dunlap's hands and into Bennie Fowler's for the touchdown right before the half.

However, it's important to remember the mess that Tim Beckman inherited when he took over the job from Ron Zook. Because the school didn't fire Zook after the 2009 season and just left him hanging as a lame duck in 2010 and 2011, it killed recruiting for two seasons. Which ultimately led to the lack of depth and talent that Beckman and his staff are working with right now.

It's not the kind of situation that Beckman can fix with one recruiting class. I don't even know that two will.

Replacing [Beckman] will be hard. I'm not talking about replacing a guy of Beckman's coaching acumen, I simply mean finding somebody who will be willing to take the job.

Also, let's look at similar situations from another school. In 2010 Kansas hired Turner Gill to replace Mark Mangino. It was a similar situation to what we had here, as a large part of the Kansas fan base was happy with Mangino and didn't think he should be fired. Well, Gill was a flop. He was fired after two seasons and five wins. And while firing Gill may have been the right decision in a vacuum, it was the wrong decision for the Kansas football program.

Because Kansas had to replace him, and the football program was an absolute mess. There was a dearth of talent on the roster, and Kansas had a very hard time finding a coach that was willing to take on the salvage mission that was Kansas football. So instead it had to turn to a guy that wasn't on anybody's radar. A guy that was so desperate to get a head coaching job somewhere that it didn't matter what the situation looked like.

And that's how Kansas wound up with Charlie Weis. So far through his first season and a half Weis has a worse record at Kansas (3-15) than Beckman does at Illinois (5-14).

The Kansas situation is the same situation Illinois would find itself in should it actually fire Beckman this season.

Replacing him will be hard. I'm not talking about replacing a guy of Beckman's coaching acumen, I simply mean finding somebody who will be willing to take the job (and I won't even get into the financial situation, which is another obstacle). I hear people throw out names of guys who are head coaches at mid-major programs, or coordinators at BCS schools, but they never consider whether or not that person would take the job.

Word was that Illinois offered Sumlin more money than Texas A&M did when he was at Houston, but we all know which job Sumlin took. Because when choosing between Texas A&M and Illinois, the money doesn't really matter, does it?

This year's Kevin Sumlin could be Fresno State's Tim DeRuyter. At the moment Fresno State looks to be on a path to a BCS bowl, which will no doubt lead to DeRuyter getting a lot of interest from other schools this winter when there are openings.

Well, if you're Tim DeRuyter, and you have multiple options, is this Illinois situation the one you're choosing? You know, the school that just fired its previous head coach because he wasn't able to completely rebuild the program in two seasons.

Of course he isn't.

Another name I've heard mentioned is Eastern Illinois' Dino Babers. He's an interesting candidate for sure, and one I think would be willing to take the job because it's a big step up from Eastern Illinois. However, we can't be sure Babers would be any more successful than Beckman. 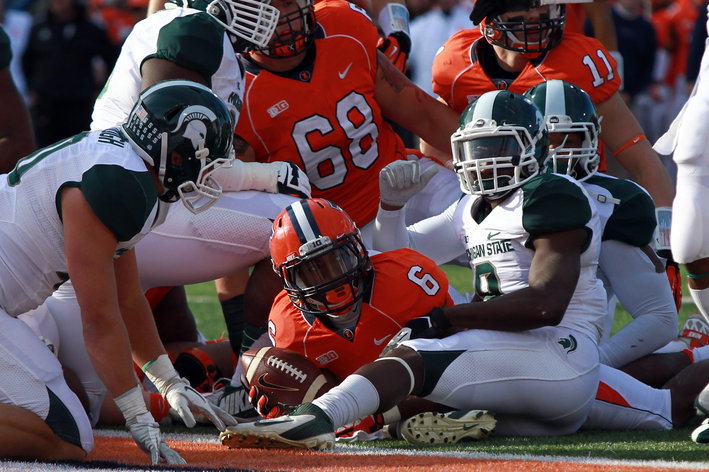 How many people were mad at Mike Thomas for hiring some coach from the MAC they'd never heard of when he hired Beckman? And now those same people think the solution is a coach from the Ohio Valley Conference who has literally only 19 games of head coaching experience under his belt. It just doesn't make sense.

So you see, it's just not that easy.

At the moment I think the only step that Illinois can actually make is what I said they were going to do last week. If you need somebody to take the fall for this season, then the fall guy will be Tim Banks. Then you just cross your fingers and hope that whoever you hire to replace Banks can have the same immediate impact on the defense that Bill Cubit had on the offense.

Because it's important that we remember one thing. Before the season the majority of us said that Beckman would deserve a third season as long as the team showed improvement this season. Well, this team has shown improvement. Quite a bit of it, too.

They've already won more games, and until yesterday, even when getting their butts kicked by Nebraska and Wisconsin, this team didn't stop trying. Now, don't get me wrong, that second half yesterday has me scared. I am worried that these last five games could feature a team of zombies just trying to get to the spring semester as quickly as possible.

But at the same time, it was only one half of the 14 halves we've played this season, and I'm not going to let one terrible half erase the previous 13. It's just not logical.

Now, if the last five games go the same way yesterday's second half did and the Illini finish the year 3-9 with embarrassing losses to teams like Indiana and Purdue, then I'll be standing right there next to you at the Fire Tim Beckman bonfire, holding a pitchfork and demanding heads to roll.