Thoughts On The Orange & Blue Scrimmage

We got to watch Illinois basketball for the first time in seven months.

Share All sharing options for: Thoughts On The Orange & Blue Scrimmage

I'm going to start this post off by saying that this was just a scrimmage, and much like the football spring game, we should take absolutely nothing we see from it too seriously. More than anything it's just a chance for us to see the new team at work, and I know that after not having Illini basketball to watch for seven months, I was happy to have it.

I also know what John Groce is talking about when he says this team has a long way to go.

There weren't any groundbreaking revelations watching the scrimmage, but there were a few things I picked up on while watching.

-- First of all, Nnanna Egwu, Rayvonte Rice and Mike LaTulip were your leading scorers. Both Egwu and Rice had 17 points while LaTulip finished with 15. You can see all the stats from the game here.

-- Nnanna Egwu has definitely gotten bigger, and he looked great tonight. If I remember correctly he made his first seven shots before missing. Of course, Nnanna's performance is a bit of a double-edged sword. There's the positive side in which he looked very good on the offensive end, but it's important to remember that he spent most of the night being guarded by Maverick Morgan, Austin Colbert or Darius Paul. And while they may not be getting a lot of minutes this year, Morgan and Colbert will be needed during the season. And they sure weren't providing much resistance on defense.

-- I think we're all going to really like Rayvonte Rice. First of all, he's a physical specimen. What may matter more, though, is that I get the feeling he's going to be really important to this team this season. I think he had the best all-around game of anybody on the team tonight, playing hard on both ends of the court. While we're all still more familiar with Tracy Abrams, Joseph Bertrand and Nnanna, come Big Ten season, Rice just might be the key.

-- I loved how aggressive Mike LaTulip was tonight. The fact is that we're probably going to need him a lot more this season than we did last year, and the fact he was handling the ball and being aggressive is certainly a good sign. LaTulip was attacking the rim like Brandon Paul and getting to the free throw line just as frequently. Of course, like with Egwu, this is a bit of a double-edged sword. If the Illini defense had trouble keeping Mike LaTulip out of the lane they're going to have trouble keeping a lot of guards out.

-- I've always known that Ahmad Starks is tiny, as I've seen him play for Oregon State. That being said, you forget how small he is until you see him on the court with his teammates. All that said, I really wish he was eligible to play this season because he brings a lot of things we can use.

-- Tracy Abrams and Joseph Bertrand seemed content to take on a background role in the scrimmage. Tracy was playing the role of distributor more than anything, looking to pass instead of shoot. And while Joe played well on the defensive end and was rebounding, he was taking a bit of a back seat on the offensive end most of the night.

-- Jon Ekey is basically just Tyler Griffey, but more athletic and with a better handle. Whether that will translate into more production remains to be seen. But he strikes me as the kind of guy who could win a game or two for us this season and throw down a monster dunk from time to time.

-- When it comes to Starks, Aaron Cosby and Darius Paul I wish they could all play this season, because they'd be nice depth. However, when it comes to Paul, I think the year off is best for him. I hope he really works hard this season because the potential is obvious given his frame and athleticism. But from what I saw tonight I don't know that he's truly ready for the Big Ten just yet. So a year within the system could have him poised to really contribute next season.

-- Austin Colbert and Maverick Morgan are a bit of a concern. As I mentioned earlier, we're going to need them this season, and they're defense was lacking a bit. Both provided help side defense coming in for some blocks, but their on the ball defense left a bit to be desired in the post.

-- Also, Morgan was way too passive down low on offense tonight. He had his shot blocked five times by my count and was hesitant. It comes with the territory with a freshman, but when he gets the ball down there by the basket he needs to get it out or attack the rim. If you wait at this level you're done.

-- I liked seeing Kendrick Nunn knocking down some shots, but he has a lot of learning to do on defense. He was called for more fouls than anybody on the team by my recollection, and they were just about all the reach in kind of fouls. Things he may have been able to get away with in high school that won't fly on this level. Defense is played with your feet, not with your hands. I'm sure the coaching staff will be stressing this to him all season long, but it's going to be hard for John Groce to give him a lot of minutes if he doesn't improve in that aspect.

-- Since he committed to the Illini I've heard the name Chester Frazier mentioned a lot when people talk Jaylon Tate. I see it now. He's going to struggle running this offense as a freshman if there's too much put on his plate, but from what I saw tonight, I think he'll be able to give us some valuable minutes this season. Just don't expect a lot of scoring from him.

-- These folks had the time of their lives on Thursday night. 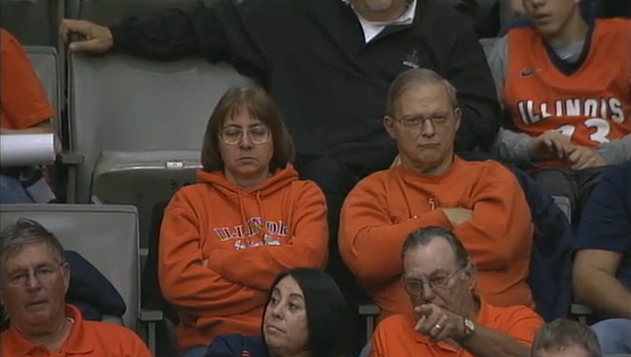