I Don't Know What To Expect

The Illini host Minnesota at Assembly Hall tonight, but with the two performances we've seen from this team in Big Ten play, it's hard to know who is showing up tonight.

Share All sharing options for: I Don't Know What To Expect

We truly have an odd basketball team here. It's the kind of team that has already picked up victories against fellow ranked squads like Ohio State, Gonzaga and Butler, giving it one of the most impressive resumes in the country. The kind of resume that will come in handy come March.

However, it's also the kind of team that when an AP voter actually puts the Illini below Ohio State, Gonzaga and Butler, you have to respect his reasoning. You don't have to agree with it, but the man does have a point. Sure, the Illini won those games, but it also beat Auburn by 2, Hawaii by 1 in overtime and Gardner-Webb by 1. There were also games against Western Carolina and Norfolk State that were much closer than the final scores indicate.

So which team shows up tonight against Minnesota?

It's hard to know for sure, but there's a strong indication that it will be the world-beaters. This team definitely has a tendency to play to its opponents, and Minnesota is a very good team. A team that will no doubt be a challenge on Wednesday night.

Yes, it's the same Minnesota team that scored only 17 points in the first half against Northwestern on Sunday, but it's also the same Minnesota team that went off for 52 points in the second half of that game. According to KenPom's adjusted offense and adjusted defense ratings, these Gophers have a top 20 offense (11th) and a top 20 defense (17th). KenPom also rates Minnesota as playing a tougher schedule than we have so far in the season.

It's a complete team, and one that is the best in the conference at doing something that has been a thorn in our side all season long.

That's not easy to do. Nor is it easy to beat. 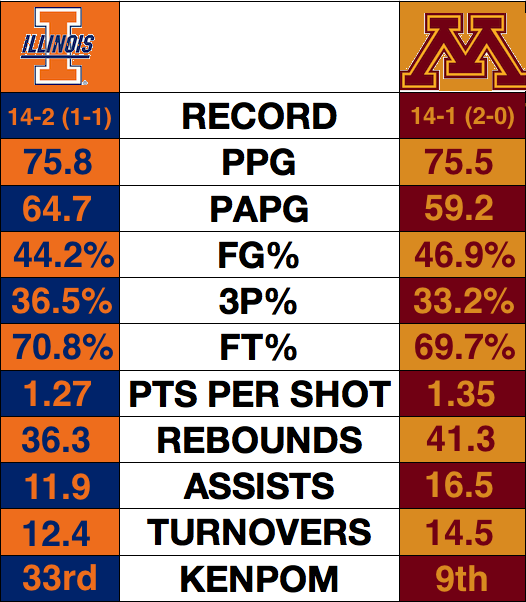 Considering those stats I just gave you about Minnesota on the offensive glass it should be fairly obvious where I'm going here, no? Yes, Andre Hollins is going to do some things tonight to annoy you, but it will be Rodney Williams and Trevor Mbakwe that may end up having you destroy your television sets. Both are averaging around 3 offensive rebounds per game, with offensive rebounds making up just about half of Williams' rebound total this season. Mbakwe cleans the glass on both sides. Oh, and if you think it's as simple as getting these guys out on the perimeter or on the bench in foul trouble, it's really not. Austin Collins and Joe Coleman have proven to be good rebounders from the guard position, and then there's Elliott Eliason off the bench. The 6-11 center is averaging 4 rebounds per game despite playing only 14 minutes a night.

Nnanna Egwu, Sam McClaurin and yes, even you Tyler Griffey. It's called boxing out and you are going to have to box out as best you can tonight. It would also be beneficial if Egwu can keep hitting that 15 to 17 foot jumper he's had some success with lately, and for Tyler to have his stroke from deep. Then while they're out on the perimeter, our best rebounders -- Brandon Paul, D.J. Richardson and Joseph Bertrand SERIOUSLY OUR TOP THREE REBOUNDERS ARE GUARDS AND ONE OF THEM DOESN'T EVEN START -- can crash the boards. Seriously, though, we're not going to be able to stop Minnesota from getting to the glass, but we have to at least slow them down and get more offensive rebounds of our own to help lessen the Gophers advantage.

Fornelli: I really can't get over Minnesota's advantage against us on the glass. I don't think we're going to play poorly, but this is a good Minnesota team. A team that's only loss came against Duke and has proven it can win on the road with a win in Tallahassee against Florida State. We keep it close but Minnesota's second-chance points prove to be the difference. Minnesota 75 Illinois 70. (0-2 on the season)

U-God: Minnesota will dominate us on the boards, that's not even up for discussion. However I think the two schools split the season series and a packed Assembly Hall helps make the difference tonight. Illinois 77 Minnesota 72. (0-2 on the season)