With a loss to Purdue already on record, life doesn't get any easier with Ohio State coming to Assembly Hall today.

It was nearly a year ago to the day that it happened. It was January 10 when years of expectations for Brandon Paul manifested over the course of 40 minutes against Ohio State at Assembly Hall. It was Paul's masterpiece.

Years from now when Illini fans mention Paul, it will be the game they mention.

Brandon Paul was on another level that night. And he had to be. Although both teams finished that night with a 15-3 record, only one was ranked in the top five at the time and it was Ohio State. And that's because Ohio State was the superior team.

Paul had an amazing night, yet the Illini still only managed to win by 5 points.

The fact Ohio State is the better team has not changed this year, nor has the likely formula for Illini success in this game. Much like last year's virtuoso performance and this year's game against Gonzaga, Illinois needs Brandon Paul at his best today.

He may not need to go for 40 or hit 8 threes, but he definitely needs to play better than he has been lately. Everybody does. While John Groce may be emphasizing rebounding in practice this week, no amount of practice is going to turn this team into a good rebounding team. So Ohio State is going to beat us on the boards.

The key is to beat Ohio State elsewhere. Protect the ball, take good shots and play good team defense. You're probably not going to stop Deshaun Thomas, but if you slow down his support you weaken him as well.

This team's life isn't on the line this afternoon, but it would be nice if it played like it was. 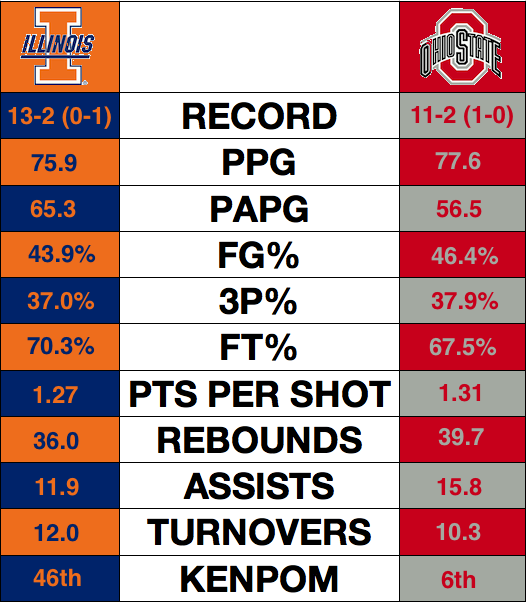 Listen, Deshaun Thomas is Ohio State's leading scorer and leading rebounder, he's going to be a pain in the ass. The person who worries me this afternoon though is Lenzelle Smith. The junior from Zion, Illinois returns to his home state and may be looking to make a statement today. And if recent history is any indication, that statement will come from behind the three-point line. Smith is making 45% of his threes this season, and as a result, he's currently Ohio State's second-leading scorer with 11.6 points per game. Earlier this week he had 17 points against Nebraska while making 5 of his 7 three-point attempts.

As I mentioned already, we won't stop Thomas but slowing his support is key, and Smith is a big part of that. It's not a coincidence that Ohio State is 2-2 in games Smith shoots 33% or worse in and 9-0 when he makes more than a third of his shots. Another guy who will be a pain in the ass is Aaron Craft, but for different reasons. His shot is not falling this season, but he's still the best defensive player in the Big Ten and he won't be easy for Tracy Abrams and Brandon Paul to deal with.

It'll probably be the same guy here until he finally does step up. D.J. Richardson, where are you? Brandon Paul probably wouldn't feel the need to force things as much as he has been lately if you started contributing to the offense. In the last five games Richardson has more turnovers (8) than he does threes (5). He's really struggling from deep as he's shooting 18% (5-for-28) from beyond the arc in that span and only 31% (13-for-42) from the floor.

Fornelli: Being at home will be a boost for the Illini as they're going to play in front of their most energetic home crowd of the season, but while it'll help, it's not going to be enough. The Illini keep it close but Ohio State pulls away late. Ohio State 83 Illinois 72. (0-1 on the season)

U-God: Staying true to form on the season, we play up to our level of competition. Sadly, we also experience our first losing streak. Ohio State 70 Illinois 65. (0-1 on the season)