It Would Be Nice If Tom Izzo Retired

In our history the Illini are 55-55 against Michigan State, but that record was a lot better before Tom Izzo came to East Lansing.

Share All sharing options for: It Would Be Nice If Tom Izzo Retired

It probably depends on how old you are or how long you've truly been paying attention to Illinois basketball, but you might be surprised to find out that in the 110 games between them, Illinois and Michigan State have split the wins equally. The Illini have 55 and Sparty has 55.

Two of those Illinois wins have come in recent seasons, both in Champaign, and they've stood out for a few reasons. The big reason though has been Michigan State has been good and Illinois hasn't been lately, so those wins serve as pleasant memories from bad seasons. However, wins against Michigan State since 1995 have been few and far between.

That was the year that Tom Izzo showed up in East Lansing, and in Izzo's first 17 seasons with the Spartans he's done a lot of work to even up the mark between our two schools.

The Illini have gone up against Izzo's Spartans 33 times, with Lou Henson, Lon Kruger, Bill Self, Bruce Weber and now John Groce matching wits and players. In those 33 games the Illini are 13-20, and five of those wins came consecutively from 2003 through 2006.

Remember when Bruce Weber started out 4-0 against Michigan State?

But if you take away that little run -- also known as the Deron, Dee and Luther Era -- Illinois is actually 9-20 against Izzo.

However, looking at this Illinois team, we don't need to worry about the past or the future. The only concern for us should be right now. Tonight's game, and if we take a glimpse at the past to get a better view of the present, there are some good omens for this game.

Tonight will mark the first time John Groce has gone against Izzo's Spartans, and that's usually a good thing for Illini coaches. Aside from Lou Henson, who went 0-2 in his only games against Izzo, every single Illini coach has won his first game against Izzo.

Kruger won his first two, Self his first and Weber the first four.

Wouldn't it be nice if John Groce could continue that trend? And in East Lansing no less. That's the kind of win that would look very nice on a resume when a group of people are sitting in the room trying to decide if the Illini are worthy of an at-large berth in the tournament. 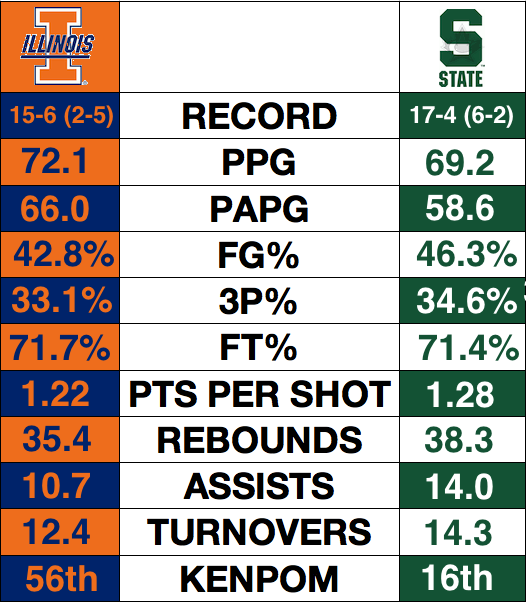 Combining our poor shooting with Michigan State's defense will be the biggest pain in the ass tonight, but as far as players are concerned, the guy who worries me more than anybody is Branden Dawson. Dawson is not just a big guard who can score. The 6'6 sophomore is also Michigan State's third-leading rebounder with 6.7 rebounds per game. That's an average higher than anybody on the Illini roster. He also leads Michigan State in steals while shooting about 55% from the floor.

At the end of this game he might not have the most impressive box score amongst the Spartans, but I guarantee you he'll play a large role in how this game goes.

It's two guys, actually. While the Illini will definitely need Brandon Paul to finally start playing well again, Nnanna Egwu and Sam McLaurin could be more important tonight. Michigan State is a better rebounding team, but it's strength is on the defensive glass. Adreian Payne and Derrick Nix in particular are good at cleaning up missed shots, but Sparty doesn't really crash the boards as well on offense. And it's important that Egwu and McLaurin make sure that's the case tonight as well.

The Illini need a lot to go right tonight if they're going to win, but they can do themselves a big favor by not giving Michigan State second chances.

Fornelli: I don't think this Michigan State team even resembles the best teams that Tom Izzo has had, but it's still a team that is much better than the Illini. Particularly on the defensive side of things, and that defense is what's going to make the difference tonight. Michigan State 69 Illinois 58 (4-3 on the season)

U-God: The Spartans have already gotten their annual rut and righting of the ship out of the way. We are not on their level. Michigan State 77 Illinois 67 (2-5 on the season)