View From The Madhouse: U-God Infiltrates The Press Box

In which our intrepid young hero samples the finer things in life.

Share All sharing options for: View From The Madhouse: U-God Infiltrates The Press Box

The worst thing that they can say to you is no.

This was what I thought to myself over my second Founder's Breakfast Stout the night I drove the 600+ miles from Manhattan, KS to Plainfield, IL. I jokingly suggested to my best friend Chris that I should apply for a press pass and then realized that no harm could come from it. I woke up the next morning, emailed the SID, and quickly gained credentials for the Auburn game at the United Center on December 29th.

Other than parking in lot E and picking up my lanyard from gate 3 1/2 (half number fancy!), I had no idea where I was supposed to go. Needless to say, this resulted in me wandering around. Of course, this was after a 5'4" security guard searched my backpack while it was on my back and I was standing up (I'm 6' tall). I naturally went to the court because in my mind that meant someone could tell me where to be. No one flinched when I walked to midcourt or when I went to the corner and jacked up an imaginary three. In dress clothes.

After scouring press row and realizing I would not be a part of it, I turned and looked up towards the press box. 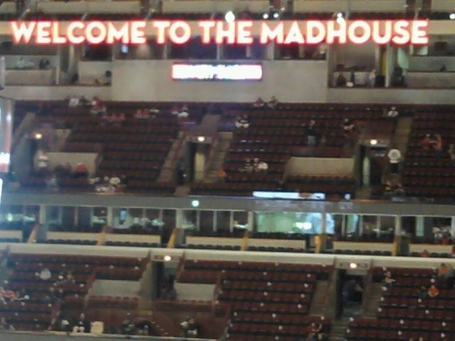 I was under the last E. (via aviewfrommyseat.com)

Did you know the press has their own elevator? You do now! And someone inside even hits the buttons for you! Just like old times! My new friend, the candy eating usher, helped get me up to 7th floor where I made the best discovery of the day: there is a soda fountain just outside the press box solely for us! THIS IS THE HEIGHT OF LUXURY!

But no one else was around. Which was frightening and confusing. So once more I began to wander and see magical sights. Like how to fix the NHL lockout! 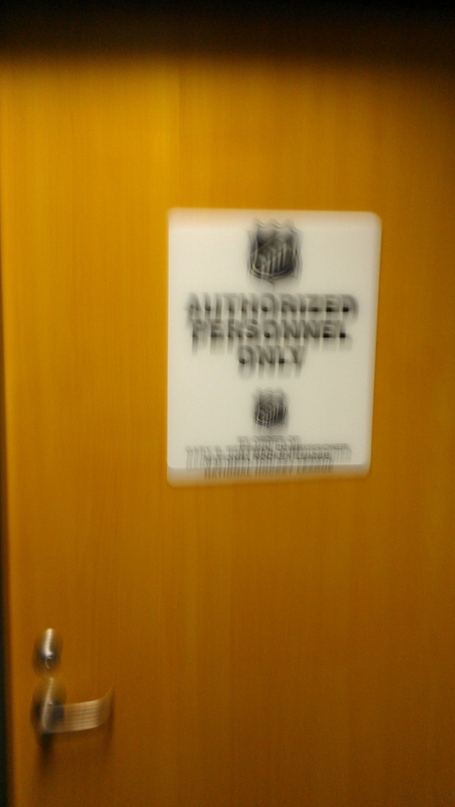 Why yes, it's horribly blurry. But that is because my soon-to-be friend Rick scared the crap out of me. Rick could tell I was obviously lost and/or new and asked if I was looking for the press lounge. I said yes, you know, like a smart person. As Rick proceeded to give me a tour of the entire stadium's innards, I tried not to smile like a goon. The press lounge completely ruined that attempt.

Unlimited. Free. Food. There was literally the largest Caesar salad I had ever seen. And next to that the largest pasta salad. After loading up my fine china with such delicacies, I moved towards the main course, expecting something fancy I'd need to use the swanky knife I had picked up. Nope! Hot dogs and Italian beef sandwiches! Even better! The next time a beat reporter complains about the free food, yell at them. I found all the media guides and learned I was destined to return to the hockey press box. I left my jacket at the coat check (ritzy!) and headed upstairs.

I sat a few seats down from Jeremy Werner and turned on the random TV monitor in front of me. They give you an HDTV! Of your own! While channel surfing, I may have stopped on Spider-man for a while. Because I am a giant child. I then got my professionalism back on and pulled up a blank word document so I could look like I belonged. Robert from A Lion Eye sat on my left and the game began. But I already recapped that. Something neat I learned at the half? Pretty girls bring you stat sheets. Here is the exact dialogue from my conversation with one.

Me: "Then yes, I definitely want that."

Her: /awkward smile and backing away

Me: /hiding the tears

The second half went as we all remember. I wanted it to never end because the end meant my life in the sky would cease to begin. I only clapped on the four point play. Professionalism! But alas Ponyboy, nothing gold can stay. The game ended, the PA announcer (who sounded suspiciously like Dean Craig Pelton) wished us a safe drive home, and I headed back to the basement to get my coat.

And then stumbled into people waiting for the press conference. I pulled up a seat, Pretty Stats Girl 2 brought me more papers, and I was informed if I had any questions for Coach Groce to feel free. Panic! I pulled out my laptop and began typing up the recap while not making eye contact with anyone. Coach Groce, Tracy Abrams, and Brandon Paul walked in. The players left after a brief question session leaving only the man with the plan. 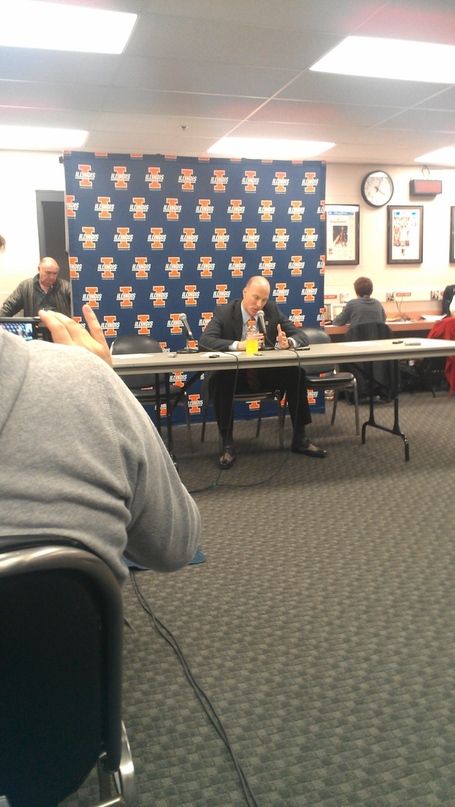 The thing that most impressed me about Groce's press conference? He knows every media member by name. Yes, we have them around our necks. But the font is not particularly large and he meets a lot of people. But when Jeremy would ask a question, John would call him by name. The second most impressive thing? Those shoes. 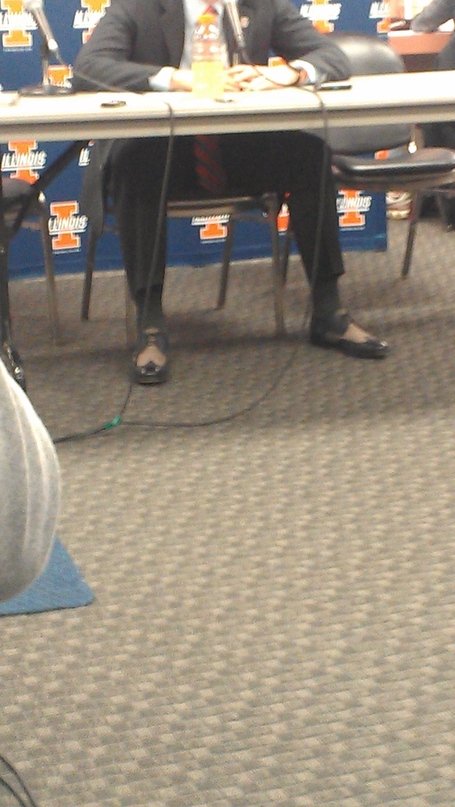 When he finished, he walked around shaking hands and wishing everyone a safe trip home. We made eye contact and I learned that I was taller than him. Or as I like to call it, a fantastic ending to a fantastic day. I'd like to thank Kent Brown for trusting me with a press pass (hopefully I didn't let him down), the fantastic staff at the United Center for making me look less foolish, the other writers in a mostly empty press box for being kind and patient, and Don Fornelli for making me the site's consigliere which opened the door to such opportunities. And you readers for indulging my delusions of grandeur.