If things ended today both Joe Lunardi and Jerry Palm think Illinois would make the tournament as an at-large.

Earlier today I went over what I think the Illini will have to do over the rest of the season in order to be chosen as an at-large in the NCAA tournament. Now, with 11 games left to play, there's a long way to go. However, if things were to end right now the Illini would still be looking pretty good despite the poor run of form this month.

Both ESPN's Joe Lunardi and CBSSports.com's Jerry Palm have updated their brackets to reflect the latest developments and both have the Illini in the tournament as of right now.

Last time we checked in with Lunardi he had the Illinois as one of his final four teams in, required to win a play-in game first. Well, while the Illini would no longer be required to go through the play-in game, Lunardi does drop them from a 10 to an 11 seed, pitting them against UNLV in the opening round of the tournament in the Austin Regional. 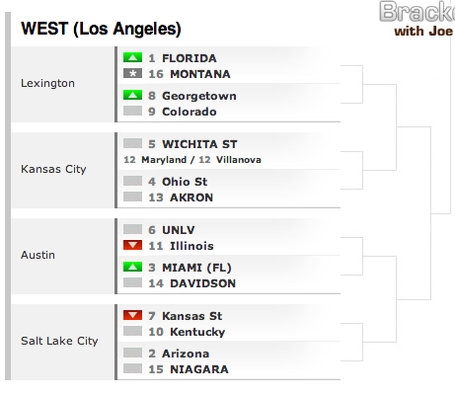 As you can see, Lunardi's bracket sets up a possible Sweet 16 matchup with Kansas State. I'm sure that wouldn't be an interesting matchup to anybody.

As for Palm, he seems to be a bigger believe in the Illini than anybody else, or at least he respects what they've accomplished more and understands how tough the Big Ten is. Not only does Palm have the Illini in his bracket, but he has them as a 7 seed in the first round playing Colorado in Lexington. Though if the Illini managed to pull out a win there they'd likely face Florida in the next round, which would not be fun. 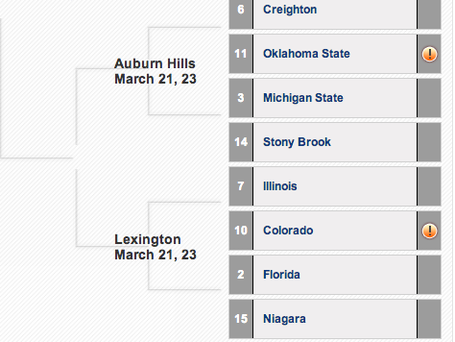 Of course, I don't care who they play, just as long as they get into the tournament. As always, though, while these projections are nice to see, they don't mean anything if the Illini don't actually start winning games again.