Life in the Big Ten has already been rough on the Illini but starting today against Michigan it's going to get even worse.

Tuesday's win over Nebraska was huge. Bigger than any road win against Nebraska should ever be, really, but big for so many different reasons. First and foremost it put an end to Illinois' three-game losing streak that saw them tumble from the top 15 to out of the rankings entirely, and secondly because it helped ease the anxiety that quickly enveloped the program yet again.

The other reason was because, realistically, it may have been our last chance at a win before mid-February.

Today's game against the Wolverines is followed by contests against Michigan State, Wisconsin, Indiana and Minnesota. Those five teams are a combined 81-17 on the season. Of course, the good news is Wisconsin and Minnesota are responsible for 11 of those losses, and both teams have appeared mortal in recent weeks. Those games suddenly look like the winnable contests in the run.

Though they'd look a lot more winnable if Minnesota and Wisconsin hadn't already beaten the Illini by 17 and 23 respectively.

If the Illini can somehow manage to emerge from the other side of this run with a 2-3 record we should be ecstatic. But, of course, before we can finish 2-3 we have to play the first game, and that's where this Michigan team comes in.

Make no mistake, the Wolverines are good. They're very good. However, that doesn't mean they're unbeatable. Offensively this is a team that is incredibly scary. With Trey Burke, Tim Hardaway Jr, Nik Stauskas and Glenn Robinson III they can come at you from a lot of different angles.

The truth is, though, that defensively these Wolverines are not perfect. They're just so good on offense that it normally doesn't matter. The secret to Michigan's defensive success is keeping opponents off the offensive glass -- defensive rebounding rate of 74.8% is 8th best in nation -- and not sending them to the foul line -- the only team in the country sending opponents to the line less frequently is St. Joe's.

All of which means that if the Illini can get to the glass and rim they can stay in this game. Oh, and play defense. As well as they can, anyway. You're not going to stop Michigan for a full 40 minutes, but if you can make them work for their points, it will pay dividends. Particularly when you consider this is a young team on the road in a tough environment. 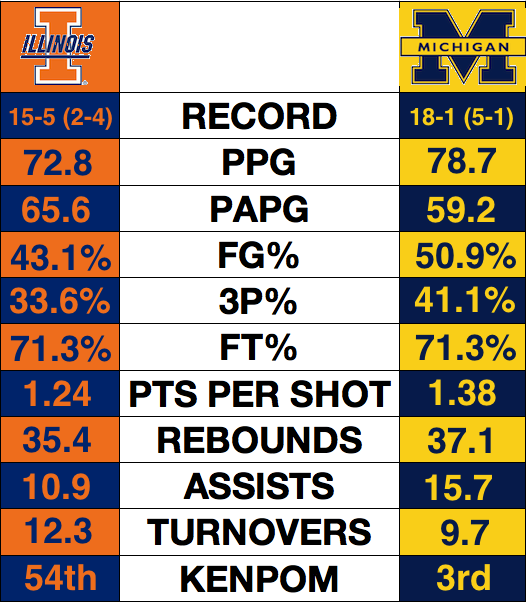 It's hard to pick anybody aside from Trey Burke here. He may just be the best point guard in the country, and he is the engine of this Michigan offense. Nobody in the Big Ten distributes the ball like Burke does, and considering how often the ball is in his hands, he doesn't turn it over often either. In other words, he's a pain in the ass because he's not going to beat himself and he's going to force you to stop him. He's taking over 13 shots a game and he's making more than half of them while shooting just under 40% from three. There's a reason Michigan is a win away from being #1 and it's Trey Burke.

Well, if limiting Trey Burke is a huge step to stopping Michigan, then how can this be anybody else but Tracy Abrams? Tracy's had foul trouble recently and after averaging nearly 28 minutes per game over the first 16 games of the season he's been limited to only 23.5 minutes per game in the last four, never playing more than 26 minutes in any of them. And foul trouble has been the driving force behind that loss in minutes. Burke will not be an easy assignment for Abrams, but he's going to have to slow him down without fouling. If Abrams gets into foul trouble and goes to the bench it will likely leave Brandon Paul on Burke, and while Paul may be able to guard him, having Brandon concern himself with stopping Burke rather than being the scorer we'll need him to be today will be to our detriment.

Fornelli: I think today the Illini surprise some people. Don't get me wrong, I'm not about to predict the upset and say the Illini take down the Wolverines, but I do think this is a game that will be close throughout and Illinois will have a legitimate chance to pull the upset. Michigan 69 Illinois 62 (3-3 on the season)

U-God: As much as I'd love the Illini to be the team that keeps Michigan from potentially becoming the number one team in the nation, I'm just not that delusional. This is the best offense we've faced his year and anything within 10 points will be a surprise. Michigan 79 Illinois 62 (1-5 on the season)