Visiting Your Own Grave

On Tuesday night the Illini return to the building where they -- and we -- learned that this team was in a lot more trouble than we could ever imagine.

Share All sharing options for: Visiting Your Own Grave

Remember when Bruce Weber died? Remember the moment you realized that this Illinois basketball team was not only in trouble, but would need a lot of work before it would ever compete for a Big Ten title again? It was just shy of a year ago.

After starting out the season 15-3 and 4-1 in Big Ten play and fresh off a huge win against Ohio State, the Illini seemed destined for good things last season. But then a losing streak came. The Illini then lost seven of their next 8 games, but a win over Michigan State in that span gave faith to a fan base even if the team was now only 16-10 and 5-8 in the conference. After all, of the seven losses, only one -- to Indiana -- was a double-digit loss. The rest were the Illini just coming up short against some good teams.

There were still five games and the Big Ten Tournament left for this team to get it together and get back to the tournament. And the place to start was in Lincoln against a very bad Nebraska team. It was the perfect place to right the ship.

But we all know what happened. Or maybe you've done everything you could to forget.

Personally, I can't. We remember days in which major event happen in our lives, whether good or bad, and on that day I was traumatized. I wasn't crying with Meyers Leonard, but I certainly understood why he was.

You don't come back from losing by 23 points to Nebraska.

Now, just under a year later, we're in very much the same position. The Illini are struggling once again, and a game against Nebraska seems like a good time -- the only time, really -- to pick up a win and maybe get things together again.

When you've already died you have no more reason to fear death. Let's hope this team knows that. 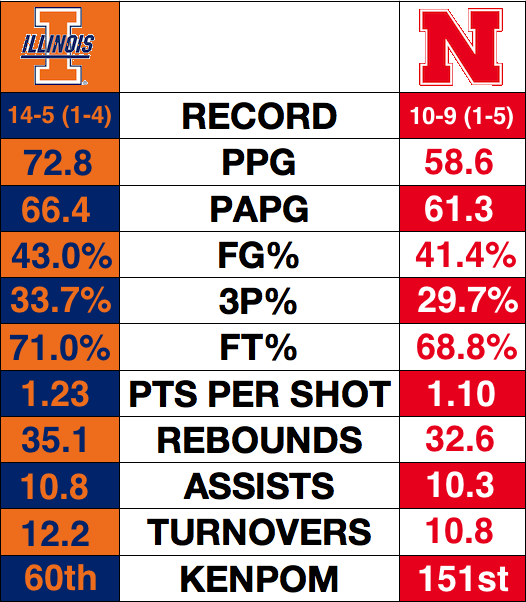 Nebraska really is a team that we are better than in every area -- at least on paper and statistically -- but we can't take anything for granted anymore. You lose that privilege when you lose to Northwestern at home by 14. If we are going to lose in Lincoln again this season odds are it will be due to a big game by Dylan Talley. The senior guard is not Nebraska's leading scorer, but he's the Huskers most important player on offense. He's also the team's best three-point shooter -- which is not saying much -- and if he has a good shooting night it can mean bad things for the Illini. Maybe Brandon Paul will remember to play defense tonight?

How do you look at this team right now and pick only one guy? For the sake of this post I'll name Brandon Paul -- WAKE THE FUCK UP, PLEASE -- but the truth is we need a team effort. The reason we've been losing is because on any given night there seems to be only one player giving a shit.

Fornelli: I won't lie, I have an ominous feeling about tonight's game. It's probably post-traumatic Illini disorder, but I'm scared to pick the Illini to win tonight, and the only reason I am picking them to win is because Nebraska is just not a good team. Illinois 63 Nebraska 57 (2-3 on the season)

U-God: The skid has to end, right? Yes, Northwestern embarrassed us in what should have been an easy win. Yes, I'm scared to predict we win this game. But Nebraska is awful. Illinois 77 Nebraska 65 (0-5 on the season)