The calendar has flipped from 2012 to 2013 and with it the Illini flip from non-conference play to Big Ten play. The 13-1 start to the season is wonderful, but it won't mean anything if we can't win within the conference.

Share All sharing options for: The Real Season Begins Tonight

That was the last time the Illini beat Purdue. Since then, whether in Champaign, West Lafayette or Indianapolis it's been all Purdue. That's seven straight losses to Matt Painter's team.

These are two trends that need to end tonight.

And this Purdue team definitely seems like the kind of team we should end them against. The Boilermakers are only 6-6 on the season with their only impressive win coming against Clemson. The other five wins came against Hofstra, UNC-Wilmington, Lamar, Ball State and William & Mary. In between those victories are losses to Bucknell and Eastern Michigan.

Of course, no matter how poorly Purdue has played this season, there is no such thing as an easy win on the road in the Big Ten. Particularly at Mackey Arena where the Illini haven't won since an overtime victory just before New Year's in 2008.

The good news, however, is that in seven games at Mackey this season Purdue is only 5-2 with losses to Bucknell and Xavier. So they can be beaten at home. That being said, this is still a team that rebounds well, and as we know, teams that rebound will hang with the Illini through 40 minutes. 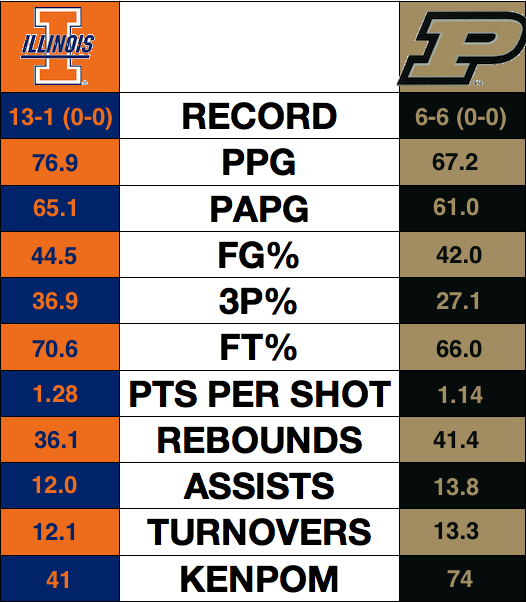 While Terone Johnson is Purdue's leading scorer -- and second leading rebounder -- Tracy Abrams and our guards have proven to be decent at slowing down opposing guards. The guy who I think will pose the biggest problem for the Illini is freshman center A.J. Hammons. Hammons is big. Like, really big.

He's 7-feet tall, weighs 280 pounds and has proven to be a decent rebounder as he averages 5.8 per game to lead the Boilermakers. He's also proven to be useful on the offensive end, as he's second on the team with 10 points per game. Now, he's not the best big man the Illini will have faced this season by a long shot, but he's still the kind of guy that can prove to be very troublesome for Nnanna Egwu and Sam McLaurin. Hammons has 45 pounds on Egwu and 60 pounds on McLaurin.

Now would be a nice time for D.J. Richardson to find his shot again. In our last four games Richardson has struggled mightily from the floor. He's shooting just 31% (10/32) from the floor overall and is even worse from three where he's made only 18% (4/22) from three in that span.

Yes, Brandon Paul has struggled a bit lately as well, but Brandon's life would be a lot easier if D.J. could start hitting his shots so defenses don't feel they can back off of him to help out on Brandon as much.

Fornelli: While I'm not as optimistic as a lot of you are, I do think the Illini get the Big Ten season started right tonight in a tight contest that we pull away in the final minute as we go on a free throw barrage. Illinois 71 Purdue 62.

U-God: The 13-1 non-conference record might be just smoke and mirrors, but we should be able to handle a down Purdue squad. We'll get out-rebounded but pull off the win. Illinois 71 Purdue 63.