It's Time To Get Right

After a pair of beatings from Minnesota and Wisconsin that have the Illini faithful doubting their team again, now is the time to restore some of that faith as we prepare to face that TEAM UP NORTH.

Share All sharing options for: It's Time To Get Right

The world is always changing. There was a time when Ohio State and Michigan pretty much kept their dominance of the Big Ten to football only, letting the rest of us plebeians have our silly little basketball. Then Michigan started finding success in basketball in the late 80s and 90s. Well, even though it pretty much gave up on giving a shit about basketball in the late 60s, Ohio State saw Michigan doing well at something and couldn't let that stand.

And now here we are.

Still, what is truly concerning about the changes in the Big Ten is that no matter what Michigan and Ohio State were up to, at Illinois we could always count on being better than Northwestern. But things are changing now. In football Northwestern has won against us more than we've won against it lately and just a few months ago put up 50 damn points against us.

And all we could do was sit there and take it.

Tonight is the night we can get shit right.

We've played terrible basketball the last few weeks, but this is a matchup we should win. The truth is that Northwestern is a team that's very much like our Illini except with less talent and a wholly different scheme. They don't have the athletes to do anything but slow the game down and try to limit their opponent's possessions.

Like us Northwestern is a bad rebounding team. Worse than we are on both ends of the court, actually, so tonight should be one of those night we win the board battle. Also, Northwestern is actually a team that is more reliant on the three-pointer than we are. And while Northwestern does well not turning the ball over -- a side effect of their slower pace -- they aren't very good at forcing turnovers on the defensive end, nor are they very good at blocking shots.

And as long as we do that, we're going to win. 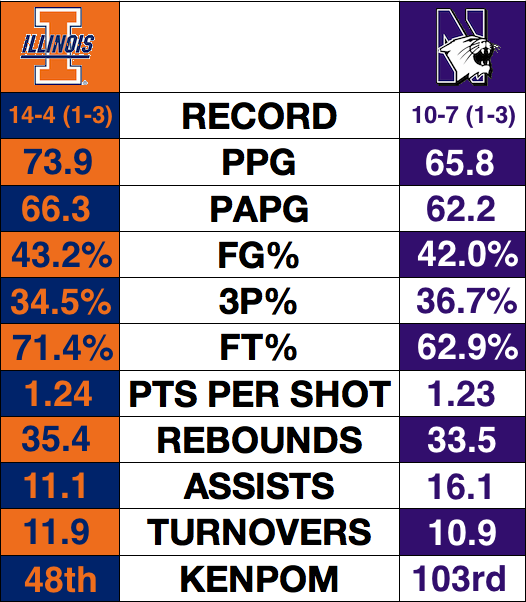 Since losing Drew Crawford to injury Reggie Hearn has pretty much had to be the man for Northwestern. If he doesn't play well then odds are Northwestern isn't going to play well. He's the team's leading scorer, best shooter, may be their best on-the-ball defender and is second on the team in rebounding. He also manages to hit the three-pointer at a nearly 40% clip. If we lose this game tonight, it will be Reggie Hearn that we let beat us.

Hey there, Brandon Paul, how you doing today? Now, while the entire team pissed down its leg in Madison this weekend, the performance that truly bothered me was Brandon's. Not only did he have a horrible night offensively, but he did not give a single solitary fuck about playing defense. When he wants to be Brandon is one of our best defenders. He needs to give a much better effort tonight.

Fornelli: I have a feeling that John Groce has been beating the shit out of these guys in practice all week in an effort to wake them out of whatever zombie funk they're in, and tonight we'll see the rewards of such an approach. It also helps that we're playing Northwestern. Illinois 73 Northwestern 55 (2-2 on the season)

U-God: So it's become obvious that we aren't as good as our non-conference schedule led us to believe we were. But we're also not going to lose to freaking Northwestern at home. Not happening. Illinois 76 Northwestern 58 (0-4 on the season)