The Illini look to get their Big Ten record back to even, but wins are never easy to come by at the Kohl Center

Share All sharing options for: Attack Of The Big Slow White Guys

Since 2005 no Big Ten basketball program has won more road games at the Kohl Center than the Illini have with their three victories. Road teams just don't go into Madison and leave with a victory very often. In fact, Illinois is responsible for 20% of Wisconsin's home losses since 2005 as the Badgers have gone 121-15 at home in that span.

Well, while we've had success doing it before, of those three wins, only one has come since the 2007 season and that was in 2010. However, beating Wisconsin in Madison this season may not be as difficult as it has been in the past. To be blunt, this Wisconsin team just isn't as good as the teams we've seen in recent seasons.

Losing Jordan Taylor has a lot to do with it. This year's Badgers squad lacks a guard that you really need to worry about. Ben Brust is it's highest-scoring guard at 11.3 points per game, but he's shooting only 40% from the floor and the majority of his shots are from beyond the arc.

Aside from Brust and without Taylor this Wisconsin team is pretty much Jared Berggren, Ryan Evans and a slow-marching zombie parade of Wisconsin White Guys.

Which is where things get interesting in this matchup. The Illini will want to push the pace while the Badgers will want to slow things down and limit possessions. The good news for Illinois is that outside of Wisconsin's leading scorer Jared Berggren, the Badgers don't have a whole lot of size. Frank Kaminsky is another big oaf, but he only plays an average of 10 minutes per game.

As I said earlier, though, this is not a great Wisconsin team. As all Bo Ryan teams, it's a team that plays within its system and is tough to beat. However, it's also a team that's best win was a win over Arkansas and whose current strength of schedule is ranked 264th. Every time the Badgers have taken a step up in class -- Florida, Creighton, Virginia and to a lesser extent, Marquette -- they've lost. 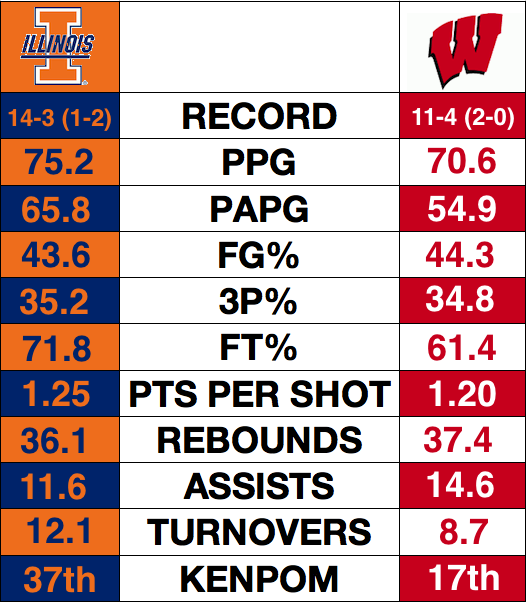 Personally I think Ryan Evans is Wisconsin's most important player, but the guy who will be a pain in the ass for us is the guy who presents the most problems for us as a matchup. That's Jared Berggren. Berggren isn't Wisconsin's best rebounder, even at 6-10, but he presents a lot of problems. He's like a Tyler Griffey but more talented. He leads Wisconsin in scoring at 13.3 points per game, but is also the best free-throw shooter and shot-blocker on the team. He's also more than adequate behind the three-point line. In other words, he's going to be a pain in the ass. He'll also play a role in keeping both Nnanna Egwu and Sam McLaurin out from under the basket, which could be a detriment to our ability to rebound.

It's Tracy Abrams. It's not that he's played poorly and needs to improve his game, he just needs to stay on the court. Stay out of foul trouble and help lead this offense in a hostile environment. Which may not be nearly as difficult to do as it was against Minnesota. Again, Wisconsin's guards aren't really the kind of guards you need to worry about penetrating the lane.

Fornelli: I want to say we're going to win this game, I really do. It's just that no matter how many times I play things over in my head, I don't see it happening. We get Wisconsin White Guy'd to death. Wisconsin 67 Illinois 60. (1-2 on the season)

U-God: Caveat emptor: every time I have chosen the Illini to win they have lost. Bet against me. Illini win an ugly one. Illinois 66 Wisconsin 62. (0-3 on the season)