Dying By The Three

Many will tell you that the Illini live by the three and die by the three, but a closer look at the stats shows that there isn't a whole lot of living going on.

Share All sharing options for: Dying By The Three

A couple of weeks ago after the Illini squeaked by Auburn at the United Center I wrote a plea to the team about being more aggressive and taking less three-pointers. That was the game we refer to as The Tracy Abrams Game because it was the day we finally realized that Abrams really is the most important player on this team.

Yes, Abrams finished with career highs of 27 points and 8 rebounds, but what he did that afternoon that truly stood out was his relentless attack on the United Center rims. Like a lot of Illini games as of late, the three point shot wasn't falling. So instead of jacking up more threes Abrams kept going to the rim and because of it he found himself at the free throw line 15 times.

As a team the Illini shot 40 free throws.

It was wonderful. It was all those free throw attempts that helped cover up our other deficiencies that day. If we'd been able to make more than 27 of the free throws the final score would have better resembled the actual game that was played.

Unfortunately not a lot has changed since that Saturday afternoon.

"Live by the three, die by the three." You've heard it plenty of times about this Illinois team, and you've probably said it yourself. I know I have. And the reason you've heard it is that, for the most part, it's true. When this team is hitting threes it's very tough to beat. The problem is we're doing a lot more dying than living as of late, and something needs to change.

Of every team in the country, there are only two that are taking more three pointers a game than we are. That would be Virginia Military Institute and Texas Southern. They're taking 28 a game on average. We take 26.

That number is to be expected given the makeup of our roster and our lack of a true inside scorer. Why it's a problem, though, is that we're just not making those shots. Meanwhile, our opponents are doing a better job of hitting theirs.

What that chart shows is that our three-point shooting percentage of 34.9% is good enough to have us ranked 115 out of 347 teams. So we're just in the top third as far as making shots, but what else you see is that 42.3% of the shots we've taken this season have been threes. Only 15 teams are relying on threes more than we are, and not a single one of those teams is from a major conference. For the most part it's teams trying to make up for a talent deficit. Meanwhile we're shooting better from two-point range, but we're just not shooting as many two-pointers as we should be.

Now, you can argue that I'm making a bigger deal of this than I need to be. After all, we are still 14-3 playing this way, so it can't be that bad. The problem with that is we're also 1-2 in Big Ten play this way, and if this season is going to end in the tournament like we all hope it will, we need to play better in the Big Ten.

And I don't think we will if we're this reliant on the three pointer.

Here's another shot showing our success with the three since the win over Gonzaga.

Now, as you can obviously see, we have not been hitting the three-pointer lately. We may be at 34.9% on the season but we're only at 26.4% in our last 7 games. What's truly alarming is looking at the percentage of shots we're taking that our threes.

In the last 7 games only 40.7% of our shots have been threes, which is actually below our season norm. However, if you take out the Auburn game in which we actually played aggressively, it goes back up to 42.3%, right in line with the season average.

We are 4-3 in the last seven games while we're struggling from deep. Ironically, the game we shot the best from deep in -- Purdue -- was one of the losses. What you do notice in the stretch is that in games in which less than 40% of the shots the Illini took were threes they went 2-1. In the other games when the percentage was 40% or greater, they're 1-3.

Now, while it's a team problem, there are certainly offenders that are worse than the rest. I'm not sure a change in philosophy is needed as much as John Groce may need to reel some players in. One in particular. 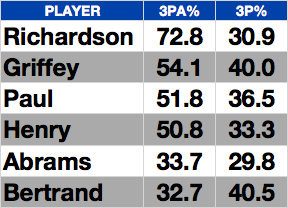 Look at D.J. Richardson's numbers. Over 70% of the shots he's taken this season have been threes! This is absolutely ridiculous, especially when he's only making 31% of them. He's not the lone offender, though. While Tyler Griffey is taking over half of his shots from deep, I don't mind it nearly as much.

That's his game. He's a stretch 4 and he doesn't have a low-post game to speak of and he's not going to be beating Big Ten defenders off the dribble. He should be taking threes, it's just he shouldn't be taking nearly as many shots total as his teammates.

As for Brandon Paul, we know Brandon can get to the rim. Hell, we know he can jump over people to get there if need be. So having Paul take over half his shots from three is too many. Yes, he's shooting well enough to justify it, but he's also too streaky to rely on making the shots every night. He needs to have more balance in his shooting diet, but the problem is I don't know if we can change who Brandon is now that he's a senior.

It's the same thing with D.J. While he should be trying to get to the rim for easy layups and not just camping behind the line, I'm not sure he can change who he is at this point.

Which, in the end, puts more pressure on Tracy Abrams. The worst three-point shooter we have, but also the most aggressive player we have with the ball in his hands. Abrams is willing to go at the rim, and when he isn't on the floor this team just gets three happy. Like Abrams, Joseph Bertand is more selective with his three point attempts, but he's also the best shooter we have from deep percentage-wise.

But that doesn't mean he should shoot more. It just means he's taking better shots. Which is something the rest of this roster can learn from as well.

When it comes to taking the three, don't just take it because you think it's what you're supposed to do. Quality is better than quantity in this case.

And the quality is truly suffering right now.