Details are still coming out, but former Illini and current Dallas Cowboy Josh Brent is currently being processed on an intoxication manslaughter charge. While Irving police have not confirmed the person killed, Tim Beckman did tweet this out on his personal account not long ago.

Sad news for the Illini #Family today. Jerry Brown, former Illini and current NFL player has passed away. Keep him in your prayers.

Brown was on the Dallas Cowboys practice squad.

This is terrible news and we'll update when we know more.

Irving Police have confirmed the death of Jerry Brown. 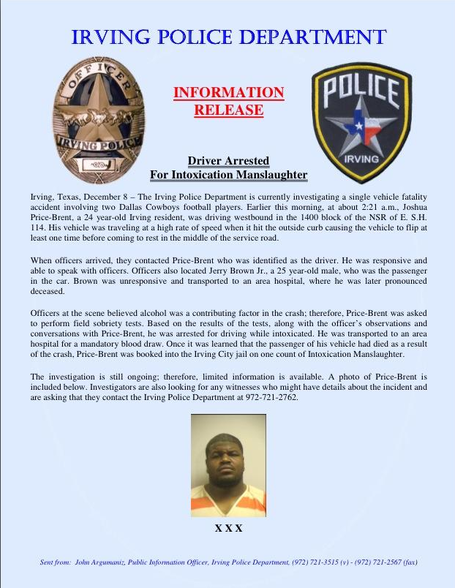 According to the police Brent was driving at a high rate of speed when he hit the outside curb of the road he was travelling on, causing the car to flip at least once before coming to a stop in the middle of the service road. Brent was responsive to police on the scene, but Brown had to be transported to a local hospital after police found him unresponsive.

Brown was then pronounced dead at the hospital.

The police believed Brent to be intoxicated and performed field sobriety tests. Brent was then arrested for driving while intoxicated, but those charges became intoxication manslaughter following the death of Brown.

This is not the first time Brent has driven drunk, as he was arrested for a DUI back in 2009 while still with the Illini.