The Champaign Room's semi-regular link dump takes you around the intertubes to find all your Illini news.

Yesterday U-God left a comment on the John Groce What The Fuck post saying that he was waiting for me to do Groce as Walter White. Well, I wouldn't want to disappoint would I?

So here you go. All hail the king. (Click to embiggen) 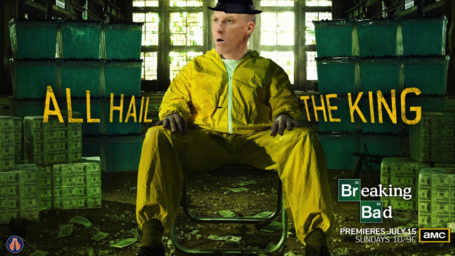 -- John Groce was on the Tim Brando Show today talking the Mizzou game.

-- Akeem Spence made it officially official on Friday. He's entering the NFL Draft.

-- A bunch of former Illini players give John Groce their advice on the Braggin' Rights game and talk about our 12-0 start.

-- A nice feature in the Chicago Tribune on Sam McLaurin's childhood and what helped bring him to Champaign.

-- DL commit Jarrod Clements sounds like a kid who won't be changing his mind before February.

--Speaking of football recruiting, an early look at the 2014 class.

-- A class that may include 4-star quarterback Adam Bertke.