These Four Things: Illinois vs. Minnesota

The Illini return home this weekend and get to face a Minnesota team that is actually beatable. But will we manage to pick up a win? Sure, if they can do the following Four Things.

Share All sharing options for: These Four Things: Illinois vs. Minnesota 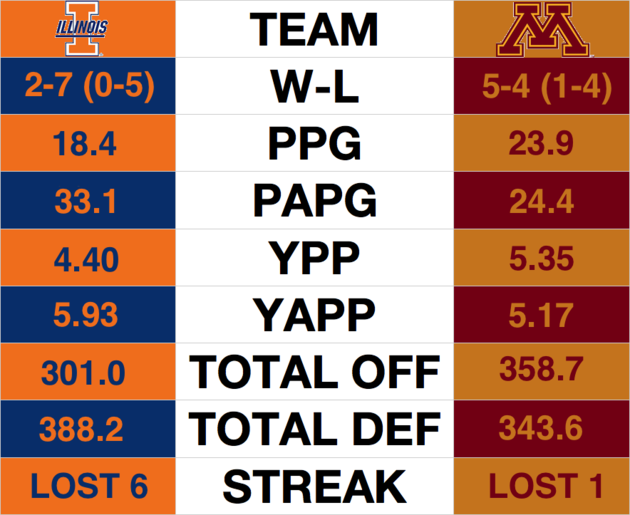 1. Take care of Nathan Scheelhaase. This will probably be an issue every week from here through the end of time. I've already made it clear that I'd like to see Reilly O'Toole playing quarterback this weekend, but it doesn't look like that's going to happen unless the coaching staff is being incredibly quiet about it. That means that Nate Shellshocked will be dancing in the pocket expecting to be hit all day, making bad throws.

And I don't blame him, as this Minnesota defensive line features two players in Ra'Shede Hageman and D.L. Wilhite. Odds are they're going to get to Nate a couple of times, but it would be nice if there were some plays where the entire pocket isn't collapsing around him too. Even if there isn't a sack.

2. What's up run game? This Minnesota defense has improved quite a bit in 2012, but most of the improvements have been in pass defense. Stopping the run is still a problem for the Gophers. Minnesota has allowed 175.44 yards per game (81st), 4.81 yards per carry (94th) and 18 rushing touchdowns (93rd) in only 9 games. That's 2 rushing touchdowns a game.

This is something that the Illini need to take advantage of if they're going to have sustained success on offense this week. Hopefully Josh Ferguson is able to play this week, and he along with Donovonn Young and Jon Davis can approach 200 yards rushing on the game. It would also be nice if Nathan Scheelhaase did a better job of reading the defensive end on the read option.

3. Pressure Philip Nelson. He's only a freshman, and this will be his fourth career start. While I've been impressed with what I've seen from him this season -- I think this is one reason Minnesota should be optimistic about the future -- he's still a kid. If this Illini defense can get pressure on him, he's going to make mistakes. This is a Minnesota team that has turned the ball over 15 times in 9 games.

That's nothing compared to how many times the Illini have done the same thing, but they can still change a game.

4. Limit big plays. Not having Jonathan Brown this week will hurt. You can't be missing one of your best players on defense and expect the unit to get better. But just because I'm not expecting the defense to suddenly shut anybody out, they will have to make sure they limit the big plays from the Minnesota offense.

The same can be said for the Donnell Kirkwood, who has 24 rushes for 10 yards or more. As a team the Gophers have 59 such runs. The Illini have 45.

Fornelli: This is a winnable game. Aside from next week's game against Purdue, it's easily the most winnable game remaining on the schedule. It's just too bad I don't think we're going to win it.

The offense doesn't make enough plays to overcome a pretty nice effort by the defense. Minnesota wins 24-14. (1-1 on the season)

U-God: Okay, so my dreams of Illinois winning three bowl games in a row for the first time ever are officially dashed. Which means it's time to rain on everyone else's parade. Sorry Goldy, you don't get to go bowlling. Illinois wins 24-17. (1-1 on the season)