These Four Things: Illinois at Northwestern

The season finally comes to an end on Saturday as the Illini take on supposed rival Northwestern. The Illini either win or head into the offseason. Either way, there's reason to celebrate.

Share All sharing options for: These Four Things: Illinois at Northwestern 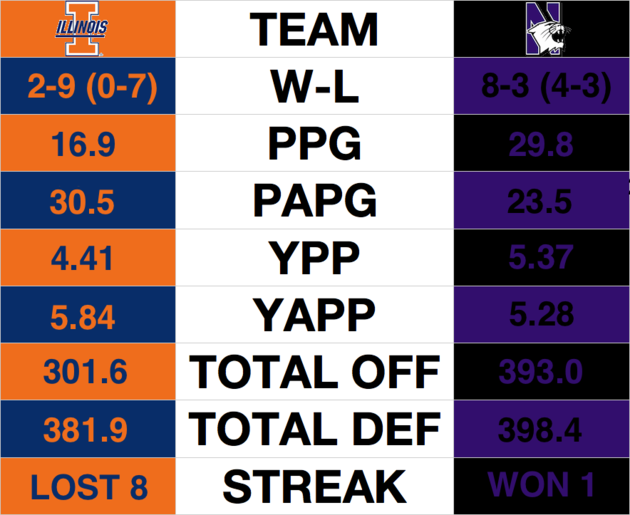 1. Contain Kain Colter and Venric Mark. That shouldn't be a problem, right? I mean, between the two of them they're only responsible for 3,516 all-purpose yards and 29 touchdowns. Just compare that to an Illini team that's managed 4,095 all-purpose yards and 23 touchdowns this season and hoooooooly shit you're depressed now aren't you? I don't blame you. You should be.

Still, as you can see by their stats above, the key to stopping Northwestern is stopping Colter and Mark. Which is much easier said than done, but we're better off with Trevor Siemian running the show, even with our pass defense. Northwestern's passing attack isn't bad, but it's no where near as strong as its ground game.

2. Throw the damn football. And throw it well. Northwestern has given up more passing yards per game than any other team in the Big Ten, though that stat is a bit misleading. When it comes to defensive pass efficiency the Wildcats are ninth in the Big Ten. Which isn't good, but it's not last either.

The point is that the Wildcats run defense is actually pretty good. It's fourth in the conference both in yards against and yards per attempt. So while we're obviously going to need to run the ball to be effective, it's important that our passing attack is actually working. Yeah, I know, I'm just as optimistic as you.

3. Don't kick to Venric Mark. Listen, we are Illinois, so we are going to be punting on multiple occasions Saturday. Let's make sure we don't give Venric Mark a chance to beat us there. There isn't a player in the country averaging more than the 20.14 yards per return -- the Illini have 25 punt return yards this season -- Mark is this season, and he also has 2 touchdowns.

Don't give him a chance for a third.

4. Protect the football. We have a problem with turning the ball over. Northwestern is tied for the conference lead in takeaways with 21 this season. Northwestern is a much better football team than us -- holy shit that's an honest sentence -- and we cannot afford to give up any possessions if we have any chance in hell of winning this game. It's cliche, it's rudimentary, and it's true.

Fornelli: I just don't see it happening. We're just not good enough. This one will be over before halftime and the final will be Northwestern 38-10. (3-1 on the season)