Illinois May Be Better Off In The Legends Division

The Illini are being uprooted from the Leaders Division to the Legends Division, and that might be good news.

Share All sharing options for: Illinois May Be Better Off In The Legends Division

It comes as no surprise that the Big Ten did not use common sense when it came to realigning its divisions. Instead of just going with the east and west divide the Big Ten is reportedly going to put Rutgers and Maryland in the Leaders Division. Which means that somebody has to move to the Legends Division.

And that somebody is us.

And if the Big Ten is going to be illogical, it's only logical that the Illini would be moved. You don't separate Indiana and Purdue if you don't have to, and Illinois has a "rivalry" with Northwestern already, and it has more in common with the states of Nebraska and Iowa than it does Pennsylvania or Ohio.

As for what the move will mean for Illinois, I would guess that our protected rival will be Purdue to preserve the Purdue Cannon. It can't be Ohio State since I don't think the B1G is going to break up Ohio State and Michigan. But that's just a hunch.

Now, there are some people who I've seen who think this is all terrible news for the Illini. A Lion Eye in particular seems to feel like all hope is gone and Illinois is never going to win another football game. I respectfully disagree.

I think this move actually benefits Illinois, and I actually have some numbers to back this theory up. Check out these handy charts! 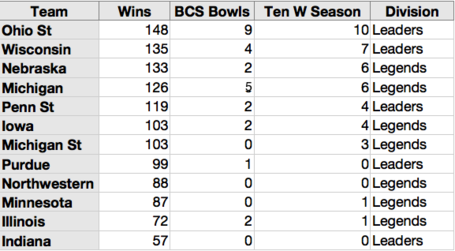 That is the amount of wins per current Big Ten team since 1998, the beginning of the BCS era, the amount of BCS appearances and the amount of ten win seasons per school. Isn't it awesome that Indiana is the only team we've won more games than since 1998?

Then there's this chart.

Yes, Indiana was terrible, but the rest of the Leaders Division featured Ohio State, Wisconsin, Penn State and a Purdue team that has not been terrible over the course of time. It's just been bad under Danny Hope. In the Leaders, Illinois is battling for fourth place with Purdue, and Purdue has had the edge more often than not.

Meanwhile in the Legends there's Michigan and Nebraska, but no real clear-cut third power. Iowa, Michigan State and Northwestern all have more mediocre and bad seasons than they do good seasons. Third place is something Illinois could accomplish in the Legends Division a lot easier than it could the Leaders.

And I can already see you going down to the comments to say something about Penn State and sanctions and "oh my god they'll be awful!"

Yeah, well, Penn State lost its best running back and wide receiver before this season, and it has some serious depth issues at other key positions thanks to transfers. Yet it's somehow managed to go 7-4 this season and beat the shit out of us. Oh, and it also has a strong recruiting class coming in.

Yes, the NCAA sanctions are going to keep Penn State from competing for BCS bowls, but they're not going to stop it from being a team that can win eight or nine games every season. Those 2-10 doomsday scenarios just aren't going to happen.

So believe me when I say that we should be grateful that we've been moved. It will help us in the long run.

B1G commish Jim Delany just told me we should not believe report on Rut & Md going to Leaders, and Ill shifting to Legends …

So I'm pretty glad I went through all the work for this post now.