The Illini travel to Columbus this weekend trying to hand Urban Meyer his first loss as a Buckeye. What will they have to do to make it happen?

Share All sharing options for: These Four Things: Illinois at Ohio State 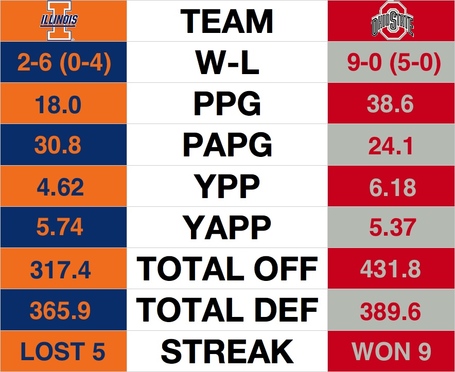 So it will be up to the defense to limit Miller as much as possible, and trust me, I understand how difficult of a task this is. I think something the Illini defense should focus on is hitting Miller whenever there's an opportunity. Not late. Not with an intent to injure. But hit him. Hard. As often as possible.

2. Protect Nathan Scheelhaase. I forgot to include it last week, but I will not be making the same mistake this week. This offense has enough problems, and none of them can be solved with Scheelhaase on his ass seven times in a game like last week. The Illini have allowed 30 sacks this season, and while some of them are the byproduct of an indecisive quarterback or receivers not able to get open, the majority belong to an offensive line that has serious problems impeding the progress of players in different uniforms.

This week they'll be facing an Ohio State offense that has 20 sacks on the year (29th in FBS) for an average of 2.22 per game (45th). The Illini can survive if Ohio State meets its average, but probably not if the Buckeyes start padding those stats.

3. Big plays. The Illini are going to need them. This Ohio State defense is giving up 24.1 points per game, and it's because its defense is not as solid as the units we grew accustomed to seeing under Jim Tressel. Ohio State's defensive pass efficiency in conference play is 125.70, and it has allowed 9 passing touchdowns against only 5 interceptions. Against the run the Buckeyes are giving up only 3.36 yards per rush in conference play, but have allowed 7 rushing touchdowns.

Which means opportunities will be there. Illinois and Nathan Scheelhaase in particular have to take advantage of them when they arise.

4. Win the turnover battle. It's one of the simplest keys to any game, and one Illinois has lost all too often. The Illini have turned the ball over 20 times this season in eight games. That's 2.5 turnovers a game. That's ridiculous. The good news is Ohio State has turned the ball over 14 times itself, and Braxton Miller can get careless with the football while running.

Illinois needs to take advantage of that. The deck is very much stacked against the Illini in this matchup, but if they can cause some turnovers crazier things have happened. On the other hand, if it's the Illini turning the ball over on Saturday, they have no chance.

Fornelli: I could put on the rosies shade of rose-colored glasses in the world and I still wouldn't think the Illini have a shot at winning this game. Ohio State wins 38-14. (0-1 on the season)

U-God: Part of me wants to believe since we seem to play up to Ohio State. But then I remember we just lost to Indiana. Ohio State wins 45-17. (0-1 on the season)